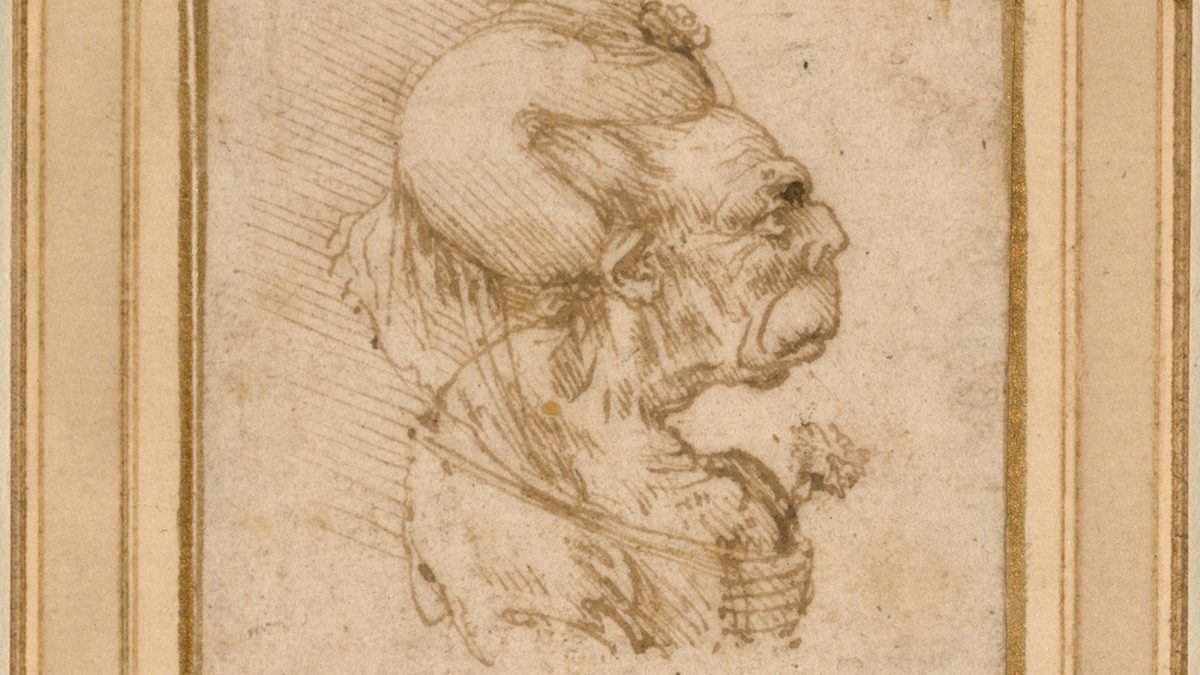 The National Gallery of Art (NGA) in Washington, DC revealed today that it has acquired Leonardo da Vinci’s Grotesque Head of an Old Woman, a drawing made by the Renaissance Master between 1489 and 1490. The work is one of Leonardo’s famed studies of human physiognomy—or the ways in which psychological or spiritual characteristics can translate into facial and bodily expressions—and it was donated to the museum by Dian Woodner, daughter of the late real estate developer and mega-collector Ian Woodner.

As the title suggests, Grotesque Head of an Old Woman depicts an exaggeratedly homely subject, rendered in profile. Economically drawn in pen, the female subject sports shriveled skin, a hook nose, a receding hairline, a hunched back and other unflattering details, all amplified to a surreal extent. She wears a small tiara and a carnation pokes out from between her wrinkled breasts. These physiognomy studies that Leonardo created went on to have a major influence in European art throughout the following centuries, laying the groundwork for what we now know as caricature art.

Leonardo’s suite of physiognomic drawings once came directly from the master’s studio, and the provenance of this work is quite straightforward for a drawing made over 500 years ago. With this acquisition, Grotesque Head of an Old Woman is now just one of ten Leonardo drawings in American public collections. The NGA owns one other (a sheet of studies it acquired in 1991), and others are in the collections of the J. Paul Getty Museum in Los Angeles and the Morgan Library and Museum and Metropolitan Museum of Art in New York.

There are presently no plans to display the newly acquired work at the NGA, though it has been featured in five exhibitions there since 1995 and has been on deposit at the gallery since 1999. Dian Woodner pledged the drawing to the NGA the same year it was last on display there, in the 2017 exhibition The Woodner Collections: Master Drawings from Seven Centuries. A gallery spokesperson tells The Art Newspaper that “the drawing is not going on view and is not going to be included in any upcoming exhibitions”, but adds that one can see it by appointment via the museum’s Make an Appointment programme, which can be done by contacting the museum’s prints and drawings study room using this link.

The NGA’s acquisition news comes on the heels of the fifth anniversary of the most shocking purchase of a work by Leonardo (or any artist, for that matter), the 15 November 2017 sale of Salvator Mundi at Christie’s New York for $450.3m (with fees).