They seek him here, they seek him there, us journos seek him everywhere. Where the heck is the Salvator Mundi? 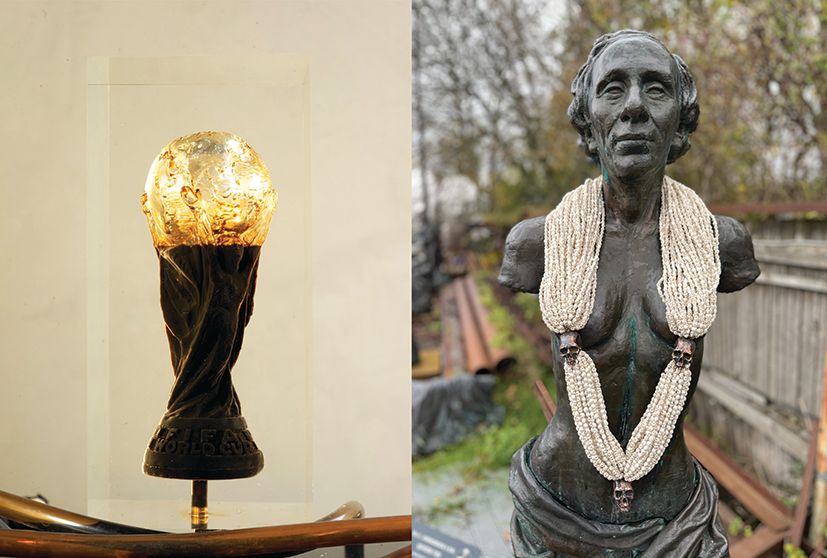 On the eve of the football World Cup in the oil-rich state of Qatar, two artists—Andrei Molodkin and Jens Galschiøt—have unveiled works drawing attention to migrant workers who allegedly suffered human rights abuses during the preparations for the tournament. The World Cup, which is drawing hundreds of thousands of international visitors, begins on 20 November.

The Russian artist Andrei Molodkin has made an alternative World Cup trophy which slowly fills with crude oil, highlighting the “crude truth” about alleged corruption at football’s governing body, Fifa.

Molodkin says in a statement: “The work of art is on sale for $150m, the figure allegedly received by Fifa bosses over a 24-year period. Over 6,500 migrant workers have died in the construction of Qatar’s World Cup Stadiums. Fifa bosses knew about the human rights of workers in Qatar, for them oil money is more important than blood.”

According to The Guardian, in 2015 senior Fifa officials were arrested on corruption and bribery charges over the awarding of the 2018 and 2022 World Cups to Russia and Qatar respectively. Last October, The New York Times reported that U.S. prosecutors revealed details about money paid to five members of Fifa’s top board ahead of the 2010 vote to choose Russia and Qatar as hosts. At the time of writing, Fifa had not responded to a request for comment.

Molodkin’s replica trophy, which was produced with the Spanish football publication Libero, is on sale through the London-based art organisation a/political; it is due to go on display at their space in Kennington on 18 December to coincide with the tournament’s final.

Meanwhile, the Danish artist Jens Galschiøt has made a necklace consisting of 6,500 minuscule skulls, one for each migrant worker that has died in Qatar. A statement issued by Galschiøt’s workshop says: “According to Amnesty International’s report [in 2021] more than 6,500 migrant workers have died as a direct result of the work to build new infrastructure, like stadiums and roads for the World Cup.” Galschiøt supports Amnesty’s campaign which is calling for Fifa to compensate the families of dead migrant workers.

Galschiøt has also made skull bracelets. “By presenting the bracelet on social media with the hashtag #Qatar6500, or by wearing the bracelet during official visits to Qatar, one makes a clear stand against human rights violations in Qatar,” adds the statement.

According to the BBC, the Qatar government said the total of 6,500 deaths is misleading because not all the deaths recorded were of people working on World Cup-related projects. The government adds that many of those who died had worked in Qatar for several years and could have died from old age or other natural causes.

Last year Galschiøt’s Pillar of Shame monument, depicting a mass of deformed bodies, was taken down in Hong Kong at the city university. The work commemorates the Tiananmen Square massacre in Beijing in 1989.