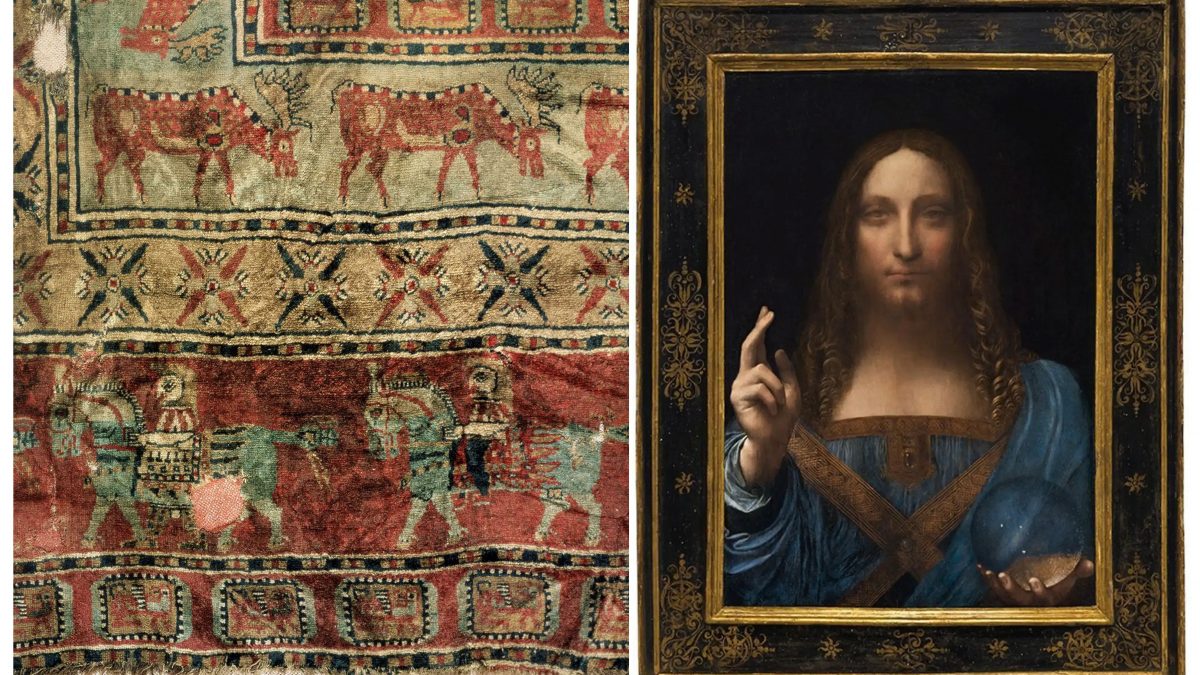 In July 2011, Robert Simon, the co-owner at the time of the future-world’s-most-expensive-painting, Salvator Mundi, announced that the painting would be shown in the forthcoming Leonardo da Vinci: Painter at the Court of Milanexhibition (9 November 2011—5 February 2012), at the National Gallery, in London, after an “unequivocal consensus” of art historians had approved the attribution of the painting to Leonardo as an autograph work. In the second paragraph of this press release, Simon wrote unequivocally “The Salvator Mundi is now privately owned and not for sale.”

The timeframe indicated by the word “now” is not clear. It is public knowledge that the Salvator Mundi was on sale two months after the end of the London exhibition, first in Dallas (where sufficient funds could not be raised to secure it), then successfully via Sotheby’s to the Russian businessman Dimitri Rybolovlev. But, less well known, the Salvator Mundi was also for sale before the London exhibition.

The respected oriental and Middle Eastern textiles scholar and dealer Michael Franses says that he was appointed as an agent to discreetly sell the painting, on a no-win, no-fee basis. In 2009, he signed an exclusive one-year contract with one of Robert Simon’s partners in the Salvator Mundi syndicate, the New York dealer Warren Adelson.

Many facts about this chapter in the history of the Salvator Mundi remain unknown. Adelson ignored my emails. Franses declined to answer some of my questions, although he copied me into his own detailed account of this fascinating episode following the publication of my book (The Last Leonardo, 2019). Nevertheless, what we can glean sheds new light on the most abiding mysteries of the Salvator Mundi: what did art historians think of it? And why did the Saudis buy it?

The respected oriental and Middle Eastern textiles scholar and dealer Michael Franses says that he was appointed as an agent to discreetly sell the painting, on a no-win, no-fee basis

Franses created two large dossiers for the painting, one about its provenance, the other about its restoration, and a 30-minute video which he versioned in five different languages. He then pitched the painting to directors and curators at five museums—the Hermitage in St Petersburg, the Louvre, the Gemäldegalerie in Berlin, the Vatican and the Prado—often using his Islamicist museum contacts as intermediaries, and to the Qatari Museums Authority. He told most of these institutions that if they wanted the picture, then he would find a wealthy philanthropist who would pick up the tab for it, of somewhere between $160m and $200m. All the museums except one responded in a similar fashion.

Geraldine Norman, who set up a branch of the Hermitage at Somerset House, in London, in 2000-07, organised the meeting for Franses at the Hermitage. She told me that the museum’s director, Mikhail Piotrovsky (who Franses knew, as Piotrovsky is a specialist in Islamic studies), and the Renaissance paintings specialist Tatyana Kustodiev thought the picture was in terrible condition, were not convinced it was by Leonardo and thought they had a great Titian of the same subject. At the Vatican, Franses had a meeting lasting around 90 minutes with Professor Arnold Nesselrath, the director of the Art History Departments of the Vatican Museums at the time. Afterwards Nesselrath spoke briefly to his superior Antonio Paolucci, director of the Vatican museums 2007-17. “I told Paolucci there was a much-restored picture—one of these usual stories where someone thinks they have a great masterpiece. He said ‘Come on. Forget about it.’”

Next stop, Berlin. Franses met the director of the Gemäldegalerie, Bernd Lindemann, who recalled to me that, “The dealer had two huge folders. In one of the two files were photographs of Hollar’s engraving [of the Leonardo] from the 17th century and the whole history of the painting, and in the other file was the documentation of the restoration. I was very surprised that he showed the latter to me, because looking at it, it was obvious that a lot of the painting was remade. I think the man was a little bit naïve, showing me all this. I said to myself, ‘Well, this is a carpet dealer, he has no idea about paintings, he doesn’t realise that he has a wreck.’” Franses was unable to arrange a meeting with staff at the Prado, and regarding his approach to Qatar, I only know that they declined to buy the picture.

All the museums, except one, which I will come to in a moment, rejected the picture for similar reasons. It had been too damaged. It was over-restored. They couldn’t judge if it was a Leonardo or not. The first important takeaway from Franses’s meetings is that it further undermines selective claims by Robert Simon and Martin Kemp that there is an art historical consensus that the Salvator Mundi is an autograph work. There is not. Art historical opinion is at best divided.

Early interest from the Louvre

Nevertheless, there was one museum—the one which is the world’s most important museum for Leonardo studies, no less—that Franses chose to approach, which did appear to take a serious interest in the Salvator Mundi: the Louvre.

Franses secured a meeting with Henri Loyrette, director of the Louvre 2001-13. Loyrette brought the curator Vincent Delieuvin into this meeting. Delieuvin, according to Franses, was apparently impressed. Delieuvin and Loyrette then agreed to go to New York to see the painting. There Franses took Delieuvin to meet the Salvator’s restorer, Dianne Modestini, and introduced Loyrette to Adelson.

Franses says that Delieuvin asked for the painting to come to Paris to be viewed alongside their Leonardos. And Loyrette agreed that, if Franses found a donor who would pay for the picture, then he would declare the SalvatorMundi a national treasure of France, which would give the donor the right to write off 90% of the purchase price against tax.

This early interest of the Louvre in the Salvator Mundi is a revelation with large implications.

But the plan went awry, according to Franses’s account, when Adelson chose to break the contract and would not let the picture go to France. Franses surmises that the decision was Robert Simon’s, based on Simon’s fear that if the Louvre failed to authenticate the painting the National Gallery’s curator, Luke Syson, might change his mind about exhibiting it. Simon has gone on the record to say: “I deny that I made that decision.”

This early interest of the Louvre in the Salvator Mundi is a revelation with large implications.

Much criticism has been made of the role of the National Gallery in London in the eventual sale of the Salvator Mundi to the Saudis for the record-breaking price of $450m. The gallery has been vilified for exhibiting the Salvator Mundi when it was “on the market”. Yet there is nothing in the guidelines of the National Gallery, London, or indeed in those of any association of European or international museums, which specifically bans such an activity. Furthermore, the museum’s authentication of the picture was not a magic bullet. It did not persuade Yves Bouvier the art advisor and dealer of the picture’s first buyer, Dimitri Rybolovlev, in 2013. Bouvier told Rybolovlev that the picture was—forgive the repetition—very damaged, greatly restored and had been on the market for a while: “If you do buy it, buy it for decorative purposes.”

But if the role of London has been exaggerated, perhaps the reverse is true of the role of Paris. Both Franses’s account and subsequent developments around the exhibition (as revealed in The Art Newspaper) show that the Louvre—or at least some important people in it—were interested in the picture. The Louvre asked the Saudis if they could have it for their Leonardo exhibition in 2019, and they secured special insurance from the French National Assembly for the picture if it was lent to their exhibition. A year before their exhibition, in 2018, the painting was already in France and was examined by the national restoration institution, the C2RMF. The Louvre put together a short book authenticating the painting which they printed in December 2019 and then suddenly withdrew from circulation, after it became clear the Saudis weren’t going to lend the picture.

Let us add to this the close economic and political relationship between the Elysée and Riyadh. It was Loyrette who, in 2007, organised the $500m deal to set up the Louvre in Abu Dhabi. Loyrette used the money from that to create an endowment for the Louvre, the first French museum to hold such a fund. In April 2018 Mohammed bin Salman came to France on an official state visit: 19 protocols of agreement between French and Saudi companies were signed, with a total value of more than $18bn, which included industrial sectors such as petrochemicals and water treatment, as well as health, agriculture, tourism, and culture. The Louvre restorers and curator examined the painting two months later. The Saudis continue to be important clients of the French state—in December 2021 France signed a $17bn defence contract with them.

The Saudis are not experienced buyers of Old Masters. They would have needed advice and they would have listened to advice. But from whom?

Robert Simon, in his lectures about the Salvator Mundi, frequently refers to it as the male Mona Lisa. That picture is the reason most people visit the Louvre—80% according to the museum’s own poll.

The Saudis are not experienced buyers of Old Masters. They would have needed advice and they would have listened to advice. But from whom? Is it not highly likely in this cultural and economic context, that someone senior from the Louvre (or French Ministry of Culture) suggested to the Saudis, that here was a picture, unfortunately beyond the price range of European museums, which might do wonders for their cultural programme and cement the cultural relationship between their country and France?