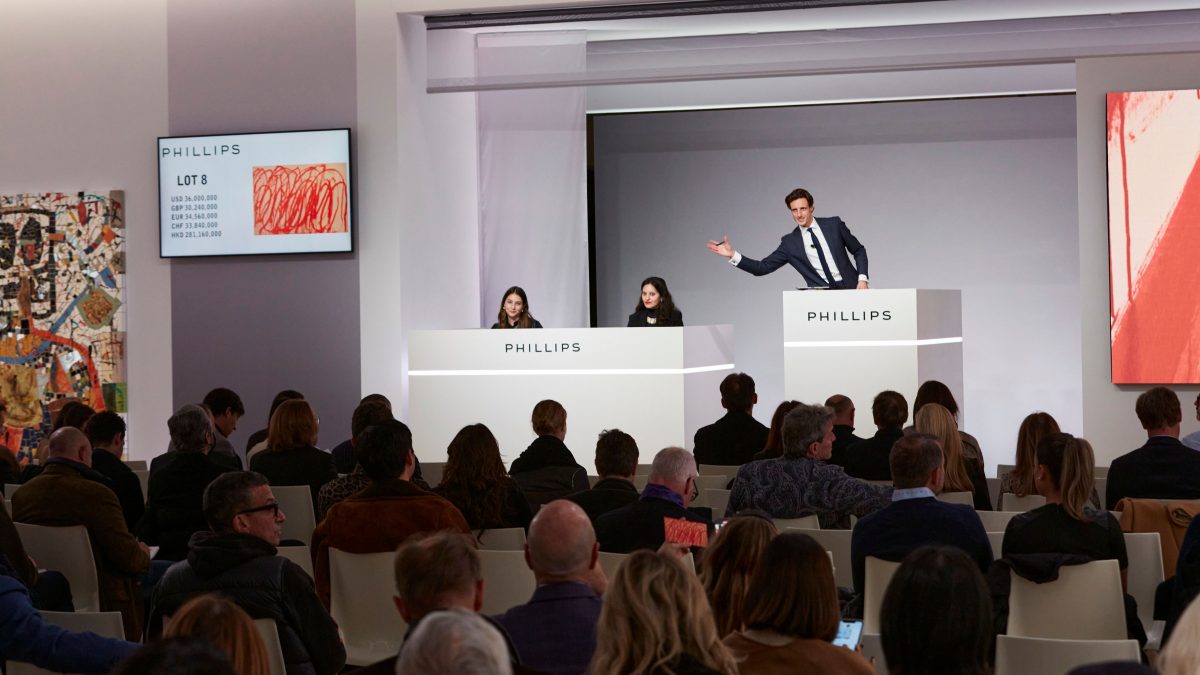 The global art market continued to soldier on with Phillips New York’s evening sale of 20th century and contemporary art taking in a respectable though measured $138.7m (with fees) on Tuesday (15 November). The 44 lots offered carried a pre-sale estimate before fees of $114.8m-$159.5m. The hammer total was $115.7m, a brushstroke over the low estimate.

Only two of the 44 lots offered failed to sale for a petite and impressive buy-in rate by lot of 4.5%. The tally, including fees, nudged past November 2021’s corresponding evening sale, which took in $137.9m for the 44 lots sold. It ranks as the company’s third-highest result for a single auction. One artist record was set.

Eighteen of the entries were backed by third-party guarantees and there was one house guarantee. That bulwark backing of higher-priced lots ensured a successful if not buzzy evening.

The third-party backed parade, a key component of the auction hemisphere, continued with Julie Mehretu’s densely marked and vibrant Tsunemasa (nextto Kaija) (2014, est $4m-$6m) in ink and acrylic on canvas, which realised $3.6m ($4.3m with fees), and the massively scaled Cy Twombly cover and top lot, Untitled (2005), which is dominated by a spiraling array of oversized and blazing blood red loops as if executed in a penmanship class gone mad. It brought a hammer price of $36m ($41.6m with fees), within its estimate range of $35m to $45m. Private dealer Judith Hess was the underbidder.

Perhaps ironically, the Twombly was formerly in the collection of Christie’s owner François Pinault and had never appeared at auction before. A similarly scaled and dated work from Twombly’s revered and late Bacchus series went for $46.4m at Christies’s New York in November 2017.

The cheery mix of Modern and contemporary offerings threaded the sale, as evidenced by René Magritte’s startling and handsome composition Le météore (1964, est $4m-$6m), which brought $3.5m ($4.2m with fees), and Amy Sherald’s exquisitely figured Pilgrimage of the Chameleon (2016, est $1.8m-$2.5m), featuring a gentleman in an open blue overcoat clutching in one hand the strings of festive balloons, which floated to $1.7m ($2m with fees). A second, equally enigmatic and rather petite Magritte entry, Le coup de grâce (1947, est $1.5m-$2m), sold on its own, without the insurance of a guarantee, for $1.6m ($1.9m with fees).

On a more serious, seven-figure track, superstar Mark Bradford’s mural-scaled and multi-layered mixed-media composition, He Barked Just Like a Watchdog (2011), hammered at its low estimate of $4m ($4.8m with fees). Mark Grotjahn’s instantly recognisable abstract composition, Untitled (Circus No. 12 Face 44.30) (2014, est $8m-$12m), executed in oil on cardboard mounted on linen, sold to yet another anonymous telephone bidder for $8.2m ($9.8m with fees).

Other heavyweight contenders (and there were many) ranged from Marlene Dumas’s prostrate and seemingly entombed Snow White in the Wrong Story (1988, est $3.5m-$4.5m), which realised $3.1m million ($3.7m with fees), and Alex Katz’s billboard-sized portrait triptych, The Grey Dress (1982, est $1.2m-$1.8m), bringing $1.8m ($2.2m with fees) with fees. It doesn’t hurt as in Katz’s case to have a freshly opened exhibition, Gathering (until 20 February 2023), at the Solomon R. Guggenheim Museum that was further enlightened by a rave review in The New York Times.

Although it seems like odd company, at least by chronology and subject matter, the early and touching Marc Chagall portrait, Le Père (1911, est $6m-$8m), bearing a reassuring certificate of authenticity from the Comité Marc Chagall, made $6.1m ($7.4m with fees). It turned out to be a restituted work that was recently returned to the heirs of the original owner.

While there was nothing close to a Paul Allen-esque, sky-is-the-limit feeling in the saleroom, glimmers of star power flickered for a moment with Jean-Michel Basquiat’s late, acrylic , oil, oil stick and Xerox collage on wood confection, To Repel Ghosts (1985, est $7m-$10m)—a title later lifted by poet Kevin Young for his double-album homage to the famed artist—made $6.5m ($7.8m with fees). It came to market, luckily it would seem, backed by a third-party guarantee.

The proceedings evoked a kind of solid, meat-and-potatoes tone, as marked by Willem de Kooning’s luscious oil-on-paper abstraction, Untitled (around 1977), which hammered at its low estimate of $4m ($4.8m with fees) and Joan Mitchell’s fabulously all-over hued canvas Cobalt (1981, est $3m-$4m), which hammered at $2.8m ($3.4m with fees).

An earlier De Kooning, Event in a Barn, a collage from 1947 (est $2.5m-$3.5m), sold for $2.5m ($3m with fees). It was and executed the same year as Andy Warhol’s promising student work, Living Room, capturing the look and atmosphere of his Plain Jane but comfy Pittsburgh home, which hammered at its $250,000 low estimate ($315,00 with fees). It was one of two early works consigned by the Warhola family.

One of the few high-flyers of the evening was the exceptional mixed-media collage on canvas by María Berrío, He Loves Me, He Loves Me Not (2015, est $500,000-$700,000), which drew four bidders and eventually hammered at $1.3m ($1.6m with fees), setting a new secondary-market record for the Colombian artist.

In that same super-charged vein, recent evening sale newcomer Ernie Barnes’s elongated and pastoral basketball scene, Slam Before the Storm (1979, est $300,000-$400,000), swished at $480,000 ($604,800 with fees). It had been consigned by actor Richard Roundtree, who famously portrayed the private detective John Shaft in a series of films beginning in 1971 and was at one time Barnes’s neighbour.

“I bought it for a London-based client,” said the unidentified New York art advisor, casually clad in a pullover sweater, as he rushed out of the saleroom after winning the Barnes.

Sultry and studded with rhinestones in a wondrous six-foot-square collage format, Mickalene Thomas’s I Can’t See Me Without You (2007), hammered at its low estimate of $350,00 ($441,000 with fees).

“Phillips did a great job,” Hess, who also underbid the Barnes, said. “But I think there’s a general cautiousness in the market.”

“They read the market well,” said London dealer Harry Blain, “and made sure everything sold.”

Following Phillips’s steady showing on 15 November and Sotheby’s mixed results in its Modern art double-header on 14 November, attention shifts back to Sotheby’s for its contemporary and ultra-contemporary evening sales on 16 November and then to Christie’s back-to-back sales of 20th and 21st century art on 17 November.