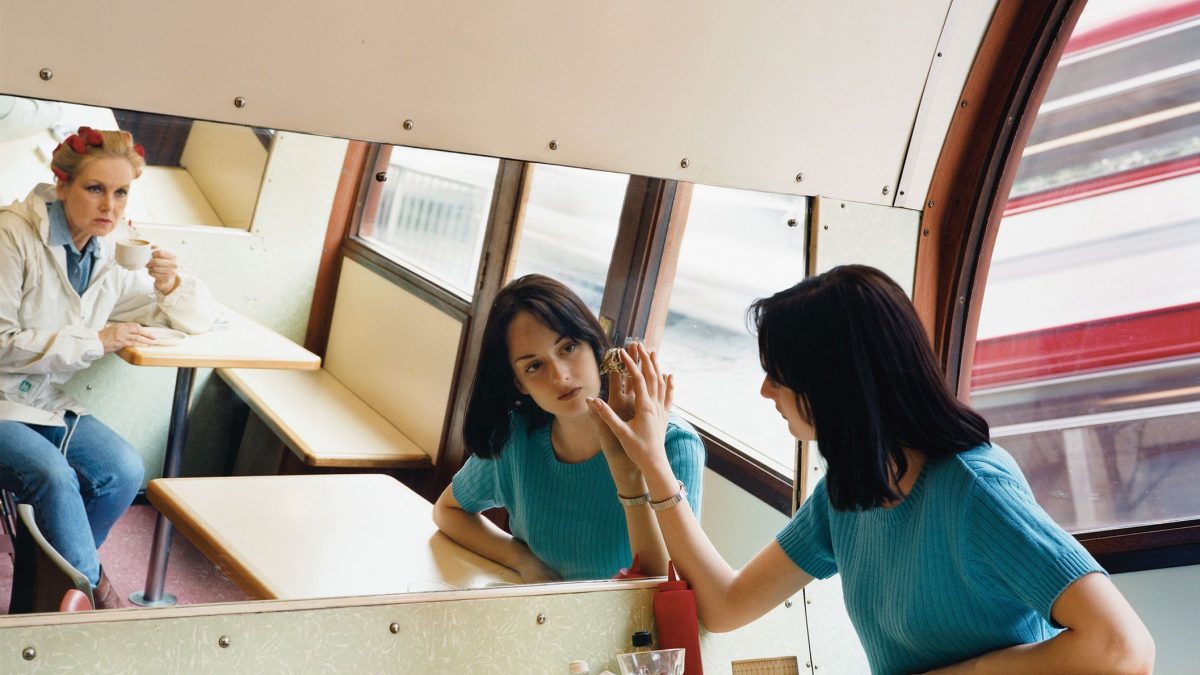 In Hannah Starkey’s photographs, women linger over coffee, they stare, lost in thought, out of windows; they congregate in shops; they carry infants. It is the invisible, everyday life of womankind, not through the male gaze, but Starkey’s observation, which has been directed intensely at women for the past 25 years. Her findings currently hang on the walls of the Hepworth Wakefield in her first major survey.

The choice of the show’s title—In Real Life—is unusual in that Starkey’s images are carefully constructed. But beneath the arresting cinematic quality, there is something very real about the 51-year-old’s photographs. The locations, the facial expressions, the scenarios are so familiar it is as if they happened five minutes ago.

Since her acclaimed graduate exhibition in 1997, Starkey has consistently drawn women into her practice, working in collaboration with her subjects and insisting they are happy with the final image. Alongside the production of In Real Life, Starkey has also supported early career women and non-binary artists living in the north of the country to produce new works for Reframing, Reclaiming at The Art House, Wakefield (until 8 January 2023).

The Art Newspaper: The first major survey of your work has just opened at the Hepworth Wakefield. How did you find the process of putting together a retrospective?

Hannah Starkey: What is interesting is that I have been on message right from the beginning. And it is interesting to see when that message is popular, or when people respond to it and when they don’t. That is living through change and history’s very slow pace. Because I have this weird job, I have been able to look at women for 25 years, and—of course this is very general—I just think women are amazing. I think they are a combination of the underdog that is intelligent, that has a lot to prove, with massive amounts of empathy and compassion.

Can you tell me a bit about how you produce your photographs? Do you begin with a location, a character or an idea?

It has changed over the last 25 years, but I think the common denominator is that it is part autobiographical, which means that it’s what I am thinking about (probably through the lens of being female) expressed in a visual way. I am dyslexic and I had a brain haemorrhage when I was a teenager, so visual language became really crucial to me in terms of how to communicate.

Something will be bugging me and then I will see something that triggers a visual representation. It might be in the street, or it might be an interaction between women. I only really ever look at women because they are my subjects, so I tend to not see men, strangely. I take the magnetic element of whatever made me want to look in the first place and then reconstruct that with my ideas of what might have been played out.

I will find a location and then find the woman to be in the picture—that is either out and about or I cast them via an online agency. It might be as random as the next woman who stops to stroke my whippet in a friendly way. I tell her what the idea is, send her the location and she looks at my work online. Through that process you are asking her to collaborate with you. Together you make a picture that communicates something that you are both happy with, whether it is about motherhood, ageing, race or class. It is using a medium like photography to continue to make those connections.

How does this collaborative approach affect the photograph?

It is important that I have a bond of trust, a conversation and an exchange of creative ideas with the woman or women that are in the picture. We have a really intense hour where it is just me shooting on my own with her and then we part ways, slightly shell-shocked because it is so intense. I definitely have an idea of what I want the picture to communicate before I shoot it, but there is something quite magical about opening space to be creative, especially in front of the lens and with a collaborator. It is an interesting space that tells you a lot more than you were expecting it to tell you, and sometimes it dictates itself. I also try and keep my images quite wide and ambiguous, so you can project onto them. I tend not to tell stories about what the images are about or why they are like this because if you have to ask, then it has failed.

You have produced some new images with students from CAPA College performing arts school in Wakefield. The image of the girl looking out at Kirkgate towers is a very recognisable scene to anyone who knows Wakefield. How did you put this picture together?

My work is all about the quality of light and my favourite lighting condition is when you get dark skies, but the sun is out—especially if it has just been raining because everything is contrasty, bright and reflective. It was a bit like that on that day. And—as the girls are performing arts students—they [are] able to understand creating scenarios. So, although it was very familiar and they had hung out up there, they worked out what the frame was and what might be happening in that frame.

You can see the towers from most parts of the city, and I really liked how relentless they felt in a way, as a metaphor for a young woman growing up—it is all eyes on you, and those windows of the towers felt like eyes somehow. The photo also feels slightly escapist and wistful—it is the way she is leaning up against the wall and has a little wisp of hair that moves. What I love about photography is that a tiny little gesture can give so much away, it is so intriguing to me how sensitive we are to reading these little clues. That wisp of hair is the psychological truth bit: one strand of hair that is not dark moves over to the dark side. It just has a lightness of touch that I can’t predict but if I am lucky, I get it. For me, in that picture, it’s the hair.

Your work often examines women in public space—is this why you started capturing images of women protesting and owning public space in a proactive sense?

I went to the Women’s March in 2017 [in London, the day after Donald Trump’s inauguration] and cried my eyes out all the way through it. It was so shocking, but euphoric and releasing. I think every woman feels the weight of misogyny and quite a few women think that they are alone in that feeling, and there was something about the Women’s March that was so empowering—the idea that you’re not actually alone and through critical mass, things can change.

Is the process of creating these images different? Is it more like documentary photography?

No, my brain thinks: “Right, what is the image that I am trying to get?” If I can get it all in one piece, that is great, but sometimes I have to shoot sections of it—it is like composing on the hoof. Because it is digital photography, you can take different elements, so you might shoot four frames and there is something in one frame that isn’t in the other and you can put them together. Photoshop is like a hybrid of photography and painting, which is what I always wanted in the analogue world. It is just looking for those emblematic images that said what I wanted them to say.

What do you think is your most significant work?

saw. But the one that started off my career I would be the most grateful to—that was the one in the café with the girl in the mirror. It was the first photograph with my own language and signature style.