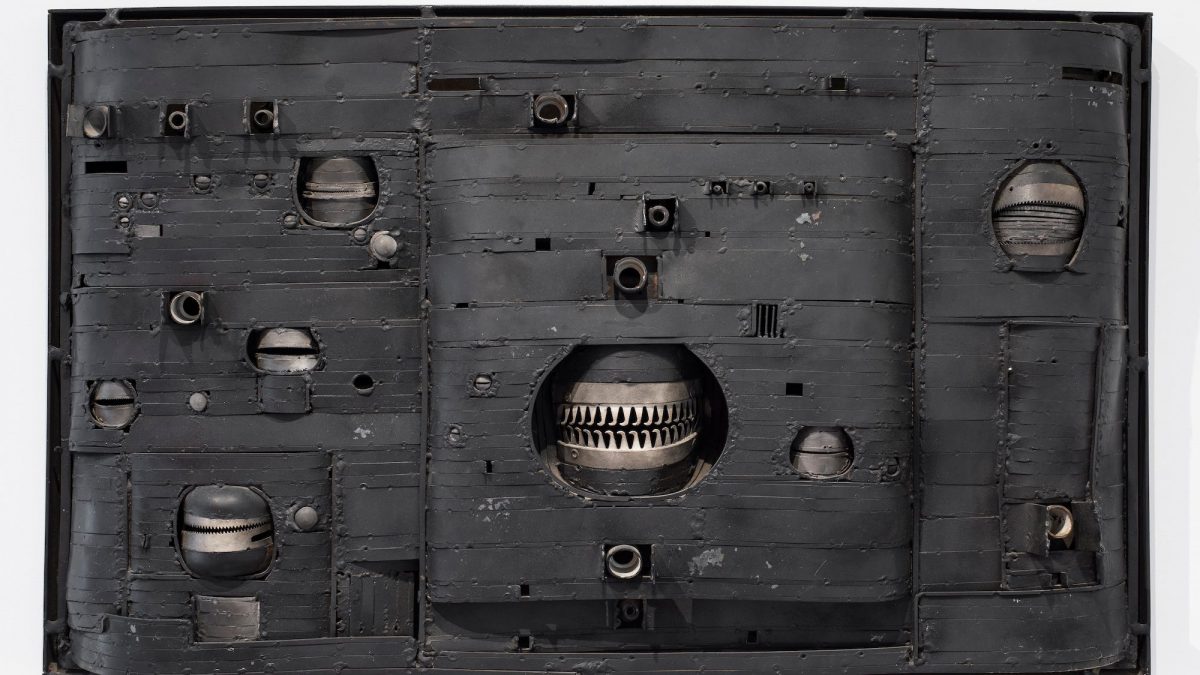 Lee Bontecou, the artist most widely known for her wall-mounted works evocative of science fiction and fabricated from industrial materials including steel, rope, canvas, fabric and more, has died. Bontecou was 91 years old, and passed away in her home in Florida.

Bontecou rose to prominence in the male-dominated New York art world of the 1960s, and her penchant for industrial materials and menacing aesthetics was a far cry from what might have been considered the realm of women’s art at the time. (Some critics, however, still insisted that the open forms in her work were allusions to female anatomy, a claim Bontecou firmly dismissed, asserting that these maws had more to do with the infinite blackness of space than with earthly genitalia.) She was among the first women artists to be represented by the tastemaking gallerist Leo Castelli—putting her alongside Robert Rauschenberg, Andy Warhol, Claus Oldenburg and others—and there was a period in which Bontecou was the only woman on the roster. In the 1970s, she abruptly fled the New York art scene, moving to a farm in rural Pennsylvania, where she continued to make work but ceased exhibiting for many years.

Born in Providence, Rhode Island in 1931, Bontecou’s father was a salesman and her mother worked wiring submarine parts during the Second World War. Her mother’s involvement in the war effort put the potential for modern life’s sublime horror firmly into Bontecou’s consciousness, and summers spent in her mother’s native Nova Scotia allowed her to develop a deep love of nature—particularly marine life. It’s easy to speculate how these appreciations of the industrial sublime and the organic, natural world may have melded to shape Bontecou’s aesthetic, which is as fluid as it is ominous.

In 1953, Bontecou moved to New York to enroll in the Art Students League, where she studied under George Grosz, Robert Brackman, William Zorach and others. In 1954, she spent a summer at the Skowhegan School of Sculpture and Painting in Maine, where she learned to weld, a skill that would become essential in her practice. From 1956 to 1957, she studied in Rome on a Fulbright scholarship, during which time she concocted another method that would prove vital to her practice: she discovered that by turning the oxygen off on her welding torch, the machine would produce a deep black soot with which she could make images. She developed methods to “harness the black”, as she put it, that included applying the soot to paperboard before using a razor blade to scrape off certain areas, creating intricate flat works she referred to as “worldscapes”.

In a 1971 solo show at Leo Castelli Gallery, Bontecou debuted a body of work that stepped away from the industrial wall reliefs and instead focused on organic forms made from translucent plastic and inspired by flora and sea life. The show—which would be her last New York solo show for nearly 30 years—was met with mixed reviews, and soon after Bontecou and her husband, artist Will Giles, relocated to rural Pennsylvania, where she continued to make art but opted not to exhibit it. “Nobody seemed to know where she had gone,” wrote author Calvin Tomkins in a 2003 article for The New Yorker, in which he referred to “the disappearance of Lee Bontecou” as “an art-world mystery”. And though she commuted throughout these decades to teach art at Brooklyn College, she maintained her distance from the art world, even turning down an offer to exhibit in the 1995 Whitney Biennial.

In 2003, Bontecou agreed to a major exhibition of her work. It was jointly organised by the Hammer Museum in Los Angeles and the Museum of Contemporary Art in Chicago, and later traveled to the Museum of Modern Art in New York. The retrospective included work from her time in New York as well as her decades away from the city. In a 2003 conversation with Hammer Museum director Ann Philbin, Bontecou took issue with assertions that she had left the art world, arguing that an artist whose life centres on their practice is as much in “the art world”—if not more so—than one concerned with shows and the market. “I’ve never left the art world,” she said. “I’m in the real art world.”

Since her return to exhibiting, Bontecou has been a part of solo and group shows throughout the world, and today her work is in the permanent collection of institutions including MoMA, the Whitney, the Los Angeles County Museum of Art, the Hirshhorn, the National Gallery in Washington, DC, the MCA Chicago and the Art Institute of Chicago, the Stedelijk in Amsterdam, and many more.