‘I will avenge u’: Lil Nas X weighs in on Van Gogh soup row with cheeky Instagram post 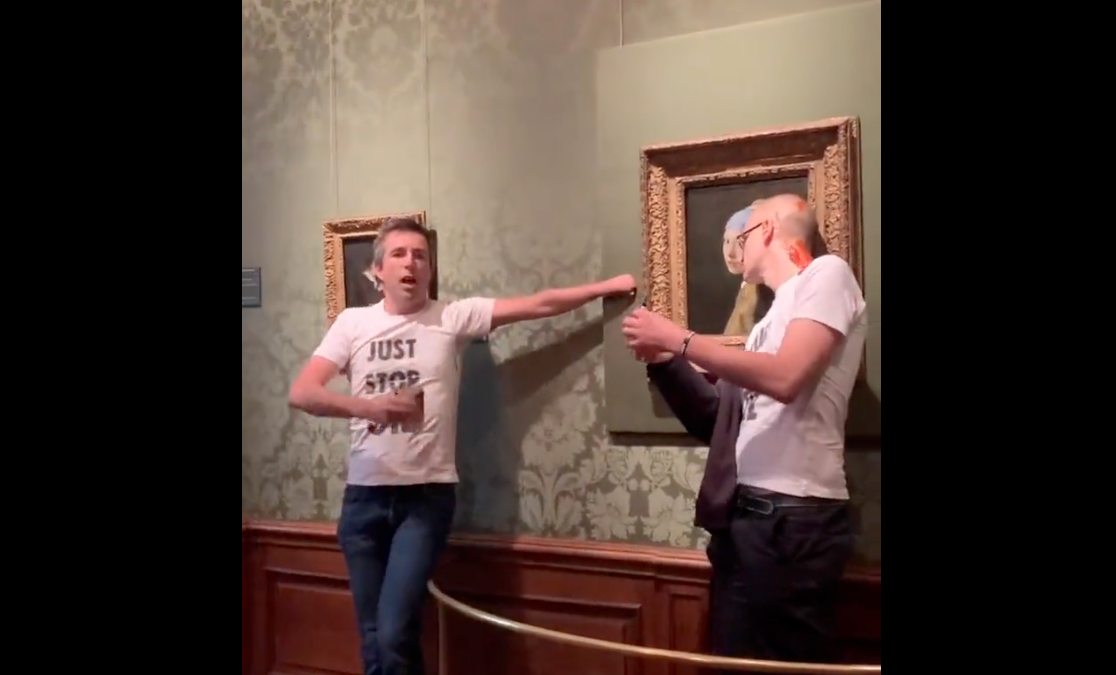 The latest in a line of high-profile, eco-activist stunts has targeted one of art history’s most recognisable works: Vermeer’s Girl with a Pearl Earring (1665). Although the men involved were wearing Just Stop Oil t-shirts, at the time of writing the organisation had not released a statement on its website to claim the action as one of its own. They did not reply to an immediate request for comment.

A video published on social media today shows two men standing in front of the work, which hangs in the Mauritshuis museum in The Hague. One attempts to glue his head to the Dutch Golden Age masterpiece, which is displayed covered in glass. The other pours a can of unidentified red liquid over the gluers head, possibly in reference to a recent action by the group Just Stop Oil in which two demonstrators threw tomato soup on Van Gogh’s Sunflowers. The stunt on 14 October at the National Gallery in London has fuelled many headlines and provoked widespread debate as to whether their means of protest were justified.

Onlookers at the Mauritshuis can be heard in the video voicing their disapproval at the action, with one shouting “shame on you!”. In response, one of the activists asks: “Do you feel outraged? Good. Where is that feeling when you see the planet being destroyed before our very eyes?”

Three people were arrested today at the Mauritshuis for “public violence against goods”, says The Hague police unit on Twitter. The museum confirmed in a statement that the painting is undamaged but adds that it condemns the actions of the demonstrators: “Art is defenceless and the Mauritshuis strongly rejects trying to damage it for whatever purpose.”

But it seems that the museum predicted this stunt and is well-prepared for such incidents. Speaking on behalf of the Mauritshuis, the press officer René Timmermans told the Dutch newspaperAD on Wednesday that internally, there has been lots of consultation about what extra measures [the museum] can take”. He conceded, however, that “you can never 100% prevent protest actions”.

The Just Stop Oil website is regularly updated with details of its recent demonstrations. Today a number of its supporters blocked traffic at a key junction at Mansion House in London to urge the UK government to halt all new oil and gas licences and consents.