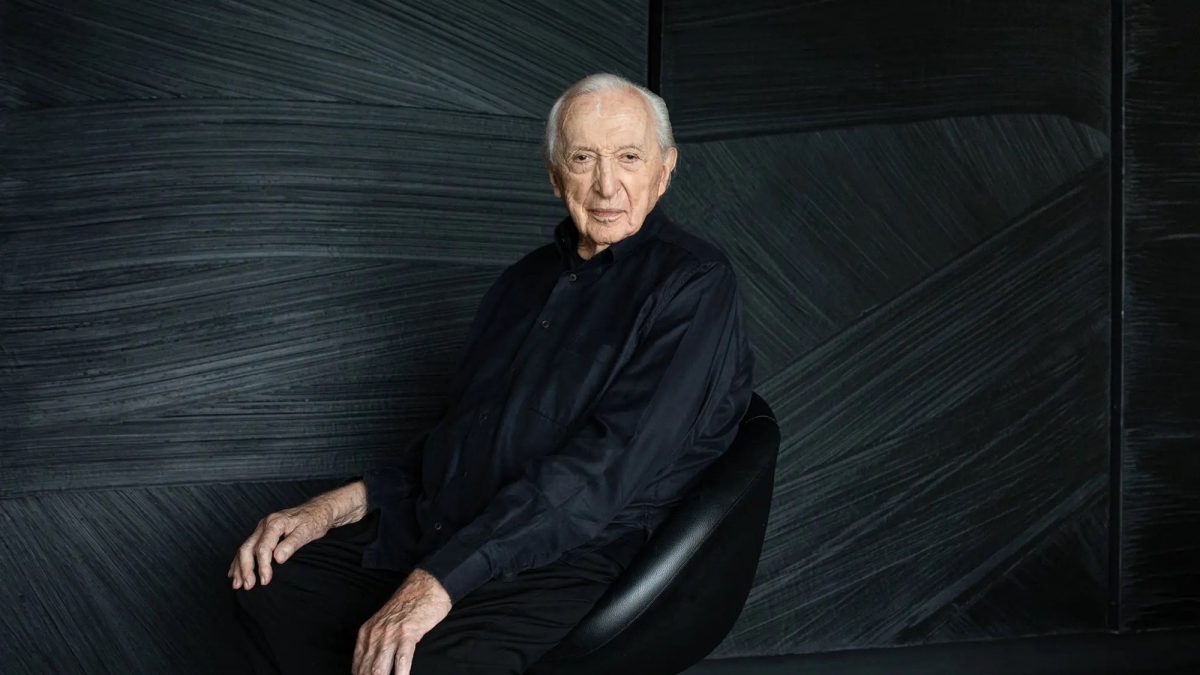 Pierre Soulages, one of the most famous French artists of the post-war era, died Tuesday night (25 October) in Nîmes in the south of France at the age of 102. The news was announced by the city of Rodez in southwestern France, where Soulages was born on Christmas Eve in 1919, and where a museum devoted to his work opened in 2014.

At the time of its opening he was 94 years old. He had asked me to follow the hanging in the new museum, before accompanying he and his wife Colette to New York, where they were awaited by dealers Dominique Lévy and Emmanuel Perrotin for the opening a joint show including 22 of his works. The Manhattan exhibition was a big success, but the artist did not show up. Lévy had chartered a jet, but, at the last minute, Soulages chose not to leave Rodez.

Mounting the first panel in his new museum had taken all day. He never accepted a frame on his works, preferring to hang them in the air, a technique he had first experimented with in an exhibition in Houston decades earlier. Obtaining proper lighting was not easy, as he struggled with poor eyesight. And if the lights were too strong, reverberation was a problem, especially with the most recent works in acrylic. So the painter chose to continue to work on the hanging in Rodez, instead of partying in Manhattan. Soulages did not disdain such honours, he was a proud man, but he did not necessarily appreciate social events and art world gatherings.

Recognition for his work did not come early, though the market for his work has taken off in recent years—a 1961 painting sold for $20.1m at Sotheby’s in New York last November. He had to wait until 2009 for his first retrospective at the Centre Pompidou; the Louvre dedicated a show to his recent works when he was 100. As he was appreciated by French presidents Jacques Chirac and Georges Pompidou (founder of the modern art centre bearing his name), Soulages suffered from a reputation as a so-called “official painter”, but this prejudice has faded as recognition for his extraordinarily original painting practice grew.

“Pierre Soulages was able to reinvent black by revealing the light,” French president Emmanuel Macron wrote on Twitter following news of the artist’s death. “Beyond the dark, his works are vivid metaphors from which each of us draws hope.”

Politically, Soulages was an anti-fascist from the 1930s onward, and later an opponent of the wars in Algeria and Vietnam. On occasion, this former rugby player—measuring 1m90 and weighing more than 100kg—did not hesitate to put up his fists and jump into the fray against extreme right-wingers.

Soulages was sometimes criticised for being too repetitive and having stuck to one formula since the start of his career, when he was a student at the fine arts school of in the southern city of Montpellier, where he met his wife Colette, now 101. They recently celebrated 80 years of marriage in the town of Sète, in a house full of light they built on the Mediterranean coast; in recent years they had divided their time between Sète and a small house near Place Saint-Michel in Paris.

Black was Soulages’s fetish colour. He even dressed every day in black, which did not please his mother. “Are you already wearing clothes for my mourning?” she reportedly teased him. As a child, the artist recalled, he had covered a sheet of paper with ink to represent snow. A friend of his sister had teased him for the unconventional choice, but he was undeterred.

At a time when Cubism still dominated the art scene, it took time for the young artist to embrace complete abstraction and opt for what he called “l’outre noir”, or the ultra-black which, after various experiments especially with walnut oil, became his signature style and subject. In 1979, this deep black would invade all his works. He claimed that black was not the absence of colours and that it keeps changing with the light, “absorbing all colours”—as it happens, physicists agree.

Natural light is the best way to appreciate the contrasts and tonalities of Soulages’s panels. For a period he produced engravings and even created stained glass panels for a church at Sainte-Foy de Conques, near Rodez, after having created around 700 tests with a small factory near Münster in Germany.

“I if I wasn’t a believer, I became a believer after visiting Conques,” Lévy says. “He studied the way that light wouldn’t cross through the stained glass, but would be fractionally fragmented, exploded through the stained glass. So when you are in Conques and you see the light coming through these stained-glass panels, how the light hits the glass and then comes in and the harmonious explosion inside the church, it’s beyond religious. And that’s what he was trying to achieve with his black paintings, to capture whatever you give them, but they’re reflected in a completely independent way. It puts you in front of the void, in front of fullness and emptiness, in front of strength and vulnerability. It has this tension, and that is what it was to know Soulages.”

His labour was physical. Every day, although this naturally changed in latter years, he would go to his studio on the Rue Saint Victor in the Latin Quarter, where his assistant prepared his material. He would drop the paint in big frames on the floor and start to create waves with homemade tools.

“Illusion is not art, presence is art,” he would say, invoking the aura of Mesopotamian statues at the Louvre and the bisons painted with charcoal in prehistoric caves. “My art is not representation, it is a presence.”