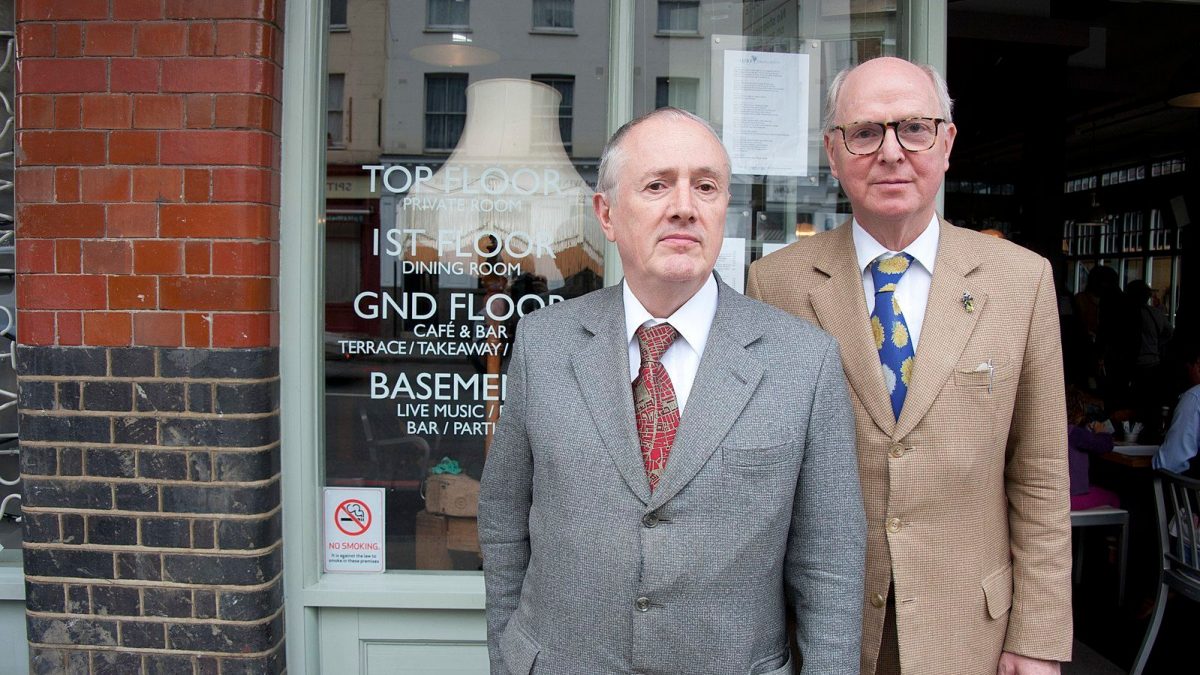 The artist duo Gilbert & George have attracted criticism from leading art world figures over the reasons behind their decision to open a private museum in London dedicated to their work.

The Gilbert & George Centre will be a place “for fans and visitors from across the world to convene and always be able to see a Gilbert & George exhibition”, according to a spokesperson for the institution. The museum, which will be housed in their studios near Brick Lane in East London, is planned to open early next year.

However, previous comments made by the outspoken and reactionary pair have led some to infer reasons behind their decision to open the space. Last year, they told theFinancial Times that “all the museums now are woke” and that museums now favour “all black art, all women art, all this art and that art,” resulting in their work being sidelined. They point to the fact that Tate holds 23 of their works in its collection, which are “never shown”. During the interview, George Passmore reportedly compared the situation to apartheid in South Africa.

“We are sorry to hear that you’ve been suffering a deficit of attention,” writes the Berlin-based South African artist Candice Breitz in a tongue-in-cheek post on Instagram addressed to the duo. “We can only imagine how annoying it is to have had Tate Modern acquire 23 of your works, only to let them languish horribly in storage.” The artist Ghada Amer commented on Breitz’s post: “As a women and African Tate and many other museums still have zero work of me and I do not think Financial Times announced it. Poor Gilbert and George I can feel your pain of being excluded.”

In the letter, signed off by “the Berlin kunstwelt (art world)”, Breitz invites the duo to relocate to the German capital, which remains “a safe haven for white men”. She then continues to criticise a number of aspects of the Berlin art world, such as its “fencing [of] pesky women and people of colour” from its “prestigious art collections”. To substantiate this claim, she points to the fact that 9% of the Neue Nationalgalerie’s collection is made by white women, adding that most prominent women artists in Berlin have never had their works collected by a German museum.

Breitz refers to the long-postponements of Joan Jonas and Adrian Piper exhibitions at the Haus der Kunst in Munich over cost concerns. These were replaced by a 2020 show of work by Markus Lüpertz, one of Germany’s most established Neo-expressionist painters; Jonas’s show eventually opened at the museum earlier this month (until 26 February 2023).

Breitz continues that for non-white artists representation in German museums is even rarer. “Let’s not even waste precious time talking about how many artists of colour there are” in German collections outside of ethnographic institutions.

Meanwhile, the Nigerian artist and academic Chika Okeke-Agulu, who is currently an African studies professor at Princeton University, also took to Instagram to lambast Gilbert & George: “These two white British men are getting themselves their own museum because [B]lack folks and women have taken over the white man’s art institutions.” The South African artist Athi-Patra Ruga commented on the post: “The taste of #whitemantears”.

Gilbert & George, who were contacted via their commercial galleries, White Cube and Thaddaeus Ropac, declined to comment on the subject.