From a solitary male retreat to a hive of collective talent: new book surveys how the artist’s studio has evolved across the ages 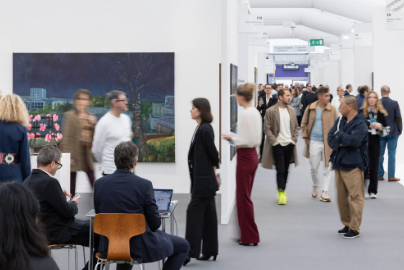 The new international fair in the Art Basel constellation, Paris+ par Art Basel, opened its doors to VIPs in yesterday in a dynamic atmosphere.

The early mood was buoyant and familiar art collectors in the crowd included Maja Hoffmann, Alain Servais, Xavier Niel and Patrizia Sandretto re Rebaudengo with her son and daughter-in-law.

“It’s an incredibly high calibre of collectors, very international, a clear step up from Fiac in terms of attendance,” said Marc Payot, the president and senior partner at Hauser & Wirth. The gallery’s sales were healthy, selling at least nine works including George Condo’s The Dream (2022), for $2.65m, Rashid Johnson’s Bruise Paintings Sanctuary (2022) for $1m and Free Fall (2022) by Avery Singer for $800,000.

The first edition of Paris+ has seen the city bring its A game, tapping into its particular art history, its powerful mega galleries and its burgeoning emerging scene, alongside an array of excellent exhibitions at the city’s leading museums, to create a buzz.

“We haven’t had this in Paris,” said Thaddaeus Ropac founder of Galerie Thaddaeus Ropac. “The concentration of international collectors, curators and players, everybody seems to be in Paris and the build-up to this fair has been amazing with a great atmosphere in the gallery over the last few days.”

He went on to credit the seemingly full return to normality after the Covid pandemic, which means that people those living in Asia and the US can now travel to Europe. “It also has to do with the fact that Paris is having a renaissance and to do with Brexit. On the other hand, we also felt that London was incredibly active last week, so I see London and Paris in a very good balance, a nice competition,” Ropac added.

Before the close of the first day, sales were strong. David Zwirner announced $11m worth of sales on the first day of the fair, stating that this would never have been possible before. The Gallery sold Joan Mitchell’s Border (1989) for $4.5m, Robert Ryman’s Untitled (1963) for $3m and Luc Tuymans’ Bouhouche (2007) for $1.35m.

Dealers in the Emerging Galleries section also spoke of fantastic results and a high calibre of collectors and curators engaging with their presentations and the artists, many of whom were in attendance at the booths. Seventeen Gallery who were presenting a solo booth of work by Patrick Goddard had sold out entirely to a single US collector by 2pm. Parliament, a young French gallery founded in the pandemic, spoke of good sales and the ‘right people’ at the fair, saying they received attention from both younger and established collectors. “It’s important for us as a very young gallery which has taken part in Frieze London and Art Basel, to participate in a fair in Paris,” said co-founder Louis Vassy.