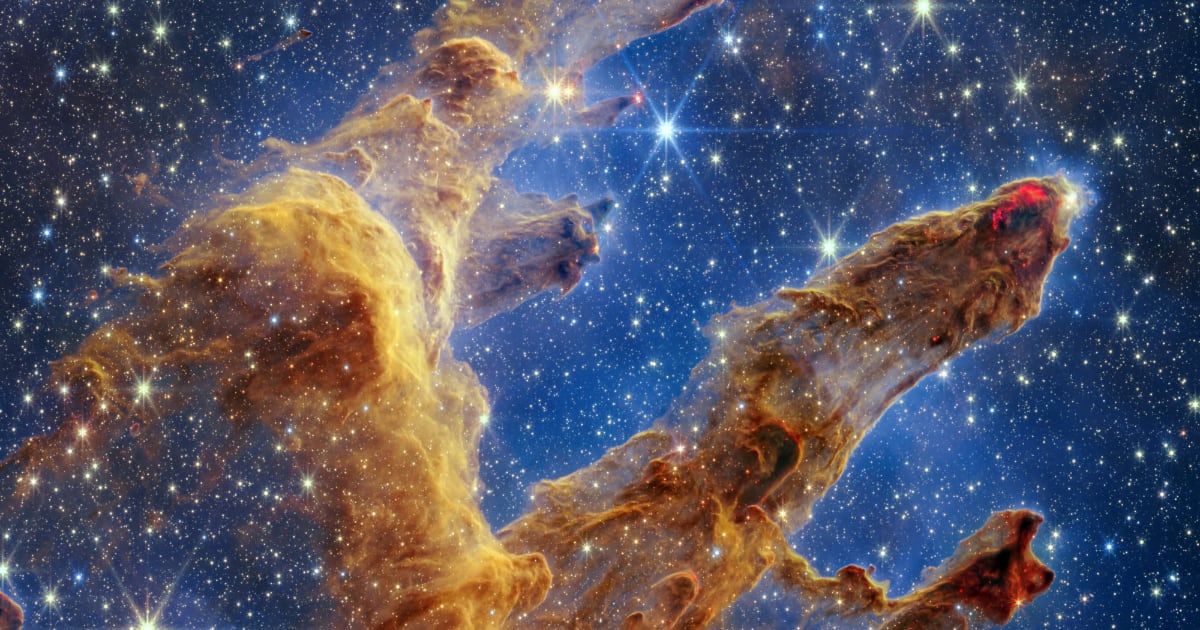 Back in 1995, NASA’s Hubble Space Telescope documented the now iconic Pillars of Creation, a photo of a celestial area known for its staggering number of star formations. That initial image offered an illuminating glimpse of the interstellar stone-like columns made of gas and dust, although a composite recently released from the James Webb Space Telescope uses near-infrared light to highlight the region in even more detail.

This new 122-megapixel photo features a deep-blue expanse studded with light, and the pillars themselves appear less opaque than in the earlier shot. When cropped, the new image shows the Eagle Nebula, located 6,500 light-years away. The bright red fiery orbs apparent from this view are new stars, which are formed “when knots with sufficient mass form within the pillars of gas and dust… begin to collapse under their own gravity (and) slowly heat up.”

Some of the incandescent bodies still in the early stages of life also produce undulating, lava-like ejections, which NASA describes:

Young stars periodically shoot out supersonic jets that collide with clouds of material, like these thick pillars. This sometimes also results in bow shocks, which can form wavy patterns like a boat does as it moves through water. The crimson glow comes from the energetic hydrogen molecules that result from jets and shocks. This is evident in the second and third pillars from the top–the NIRCam image is practically pulsing with their activity. These young stars are estimated to be only a few hundred thousand years old.

Researchers say the new photo will allow more accurate counts of new formations and their development. Related posts on Colossal about astronomyNASAspacestarstelescopes