No to Modernism, yes to arts and crafts: a look at the creative tastes of King Charles III

In ‘A Sense of Scale,’ Roman De Giuli’s Elaborate Topographies Made of Pigments Nod to Hollywood Special Effects 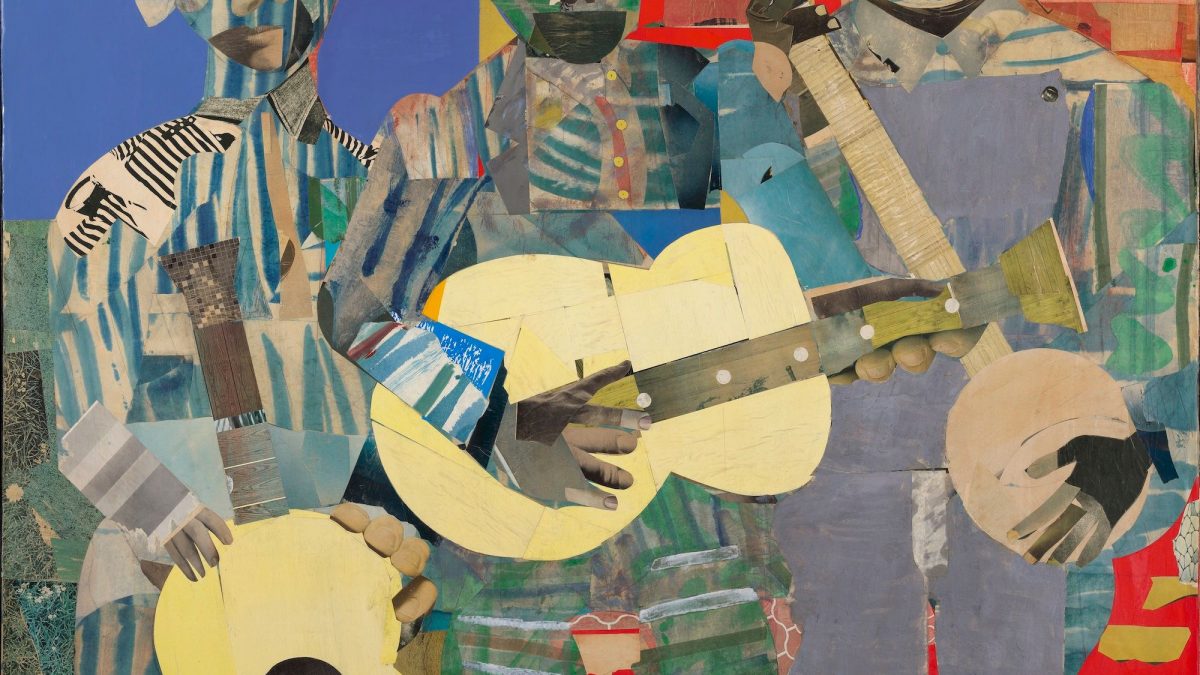 From blues icons and crooning cowboys to protest music, the guitar is a recognisable emblem in American culture. So it is no surprise that it is a recurring image in American art.

“Sometimes a guitar is just a guitar, but very often they are deeply invested with meaning,” says Leo Mazow, the curator of Storied Strings: The Guitar in American Art (until 19 March 2023) at the Virginia Museum of Fine Arts, where he serves as the curator of American art. Through painting, photography, sculpture, works on paper and sound, Storied Strings explores this instrument in American art from the early 19th century to the present.

“There are myriad contexts in which the guitar appears,” Mazow says. “Chronology matters, but I believe themes matter more. The reason one would pose with a guitar now is not that different than the reason one would pose with a guitar 100 years ago.” To help convey the many roles that a guitar can play, from storyteller’s companion to tool for political change, the exhibition is split into nine thematic sections, including “The Guitar in Black Art and Culture”, “Hispanisization”, “Re-Gendered Instruments” and “Personification”. The latter section “looks at the tendency to hold an instrument as if it’s a child, or a bodily appendage—as if it’s an extension of you”, Mazow says.

A centrepiece of the exhibition is a 1957 painting by Thomas Hart Benton of his daughter, titled Jessie With Guitar. “He would paint her on her birthday,” Mazow says, “and I believe this is the only time she is shown playing the guitar. It could not have been shown publicly much, because it came from her collection.”

An important theme in Storied Strings is that the guitar opens the playing field for who has a say. “The guitar has this time-honoured history for people to approach stories that are otherwise untold or under-told,” Mazow says. “It’s an interesting paradox that this instrument that seems fun can be put to very serious use.”

In a section called “Political Guitars”, the exhibition examines what it is that can make a guitar political. “We have a classic picture of Woody Guthrie, on loan from the Library of Congress, with a sticker on his guitar that says: ‘This Machine Kills Fascists,’” Mazow says. There are also photographs by Marion Post Wolcott and Dorothea Lange that document the effects of the Great Depression. “These images may not scream politics like Woody Guthrie’s sticker,” Mazow says, “but they’re made in a profoundly political context. They emphasise the need for further funding, and so the guitar becomes a way to plead a case, to make a point.”

A highlight from the section “The Guitar in Black Art and Culture” is the 1967 Romare Bearden collage Three Folk Musicians, which shows two figures playing guitars and one playing the banjo. “The banjo often figured in demeaning, racist, minstrel entertainment,” Mazow says, name-checking Currier and Ives prints. “But there are artists, like Thomas Eakins, who gave the subject of the Black banjo player more dignity.”

The exhibition features actual guitars, too, from those played by pioneering musicians like Lulu Belle and Eric Clapton, to a Tilton model with mother of pearl inlaid motifs all over the neck, which dates to the 1880s and was made by John C. Haynes and Company. “It’s meant to be seen, put in a parlour or a den,” Mazow says.

Part of the exhibition recreates such parlours, and includes the painting Panel For Music Room (1894) by John White Alexander, which depicts two women on a couch, one playing a guitar. “We have the painting facing a similar couch, and we have guitars on the wall,” Mazow says. “So you can sit on the couch, play a similar guitar, and effectively do a sort of ‘tableau vivant’ of this painting.”

The exhibition also features audio-visual kiosks playing music and filmed performances, and even a recording studio where visitors can watch guitarists recording music that will be released on the VMFA’s website and YouTube channel.

As Mazow emphasises, as serious as the exhibition’s themes are, he also wants the experience to be fun.

“Just as I don’t want art to be something that other people do, I want this exhibition to demystify the guitar,” Mazow says. “If the guitar is democratic, it’s because it’s accessible.”