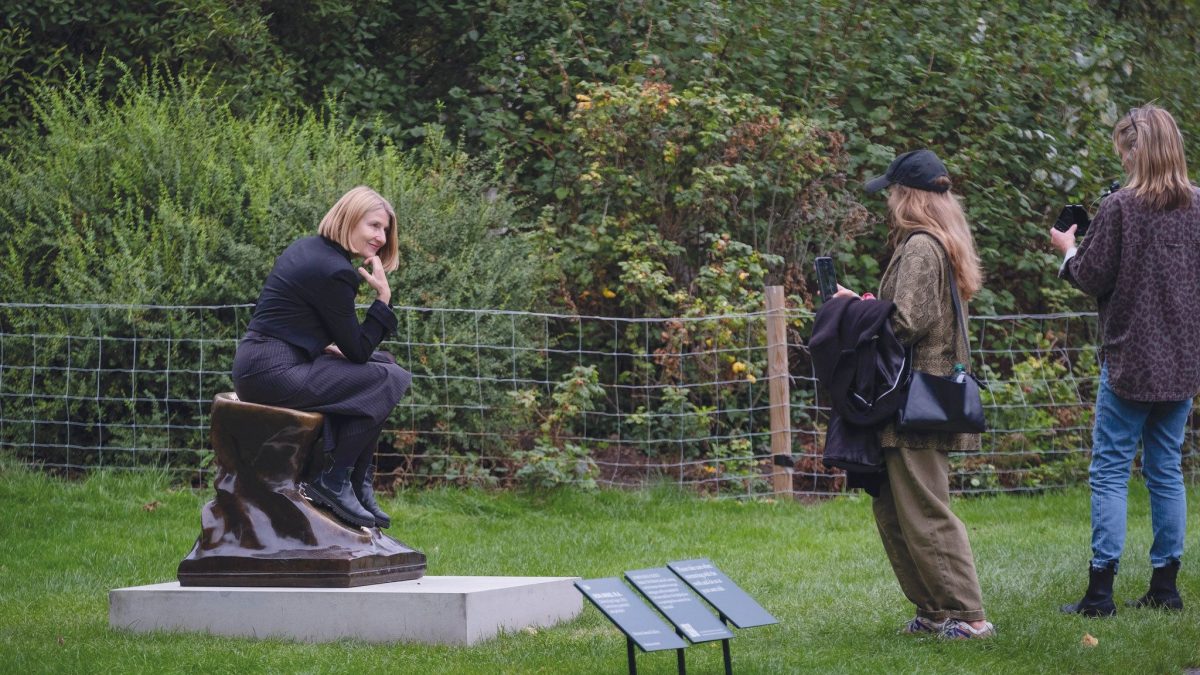 Visitors to Frieze Sculpture in Regent’s Park can park their bottoms on a rather cheeky plinth designed by Ron Arad, whose Dubito Ergo Cogito (2022) piece draws upon Rodin’s The Thinker. People are keen to sit on the work, which, says Arad, “The Thinker has left, leaving us the bronze volume he was sitting on, with an imprint of his bum and feet”. We spotted a pair of enthusiastic fairgoers known as Gabrielle and Christiane from Switzerland recreating the celebrated Thinker pose, explaining that they had just been to Arad’s studio. “He is keen to know what we think!” they said. Ron, they love your work, btw.

People are getting on their knees at Frieze to go back in time. Visitors to the fair are taking a break from browsing and shopping to kneel on a cushion near the Frieze London exit and watch a series of films in an octagonal viewfinder, cranking a handle to watch them unfold. The so-called Bioscope was devised by Kinnari Saraiya as part of her Frieze x Deutsche Bank curatorial fellowship at Baltic in Gateshead. “I’ve recreated the sound of the gramophones stationed in the street by labourers in Mumbai. A lady just said this was the sound of her childhood,” says Saraiya. Talk about moving images…

Eight contemporary artists delivered quick-fire ten-minute talks in front of their favourite National Gallery works for the event Unexpected Views on Thursday night. Among the line-up of art-historical speed daters were Alvaro Barrington, who actually abandoned his own private view at Corvi-Mora to talk about Monet’s Water-Lilies, Setting Sun (around 1907), which he declared “a perfect painting”, and Rachel Maclean, who chose Quintin Massys’s An Old Woman (The Ugly Duchess) (around 1513) as part of her ongoing interest in “the problematic nature of beauty”. Samson Kambalu, whose sculpture, Antelope, currently occupies Trafalgar Square’s Fourth Plinth, described his ambivalent affection for Paul Gauguin’s A Vase of Flowers (1896), while the graphic designer Peter Saville revealed how his purchase of a postcard in the National Gallery’s shop resulted in Ignace-Henri-Théodore Fantin-Latour’s A Basket of Roses (1890), inspiring his design for the now legendary cover for New Order’s 1983 album, Power, Corruption & Lies.

Hauser & Wirth get the Royal nod

Hauser & Wirth always pulls in a good crowd but the gallery excelled itself at Wednesday’s opening of its latest foray into hospitality when none other than King Charles III and Camilla, the Queen Consort, turned up at its new Mayfair pub and restaurant. Apart from confirming their presence, H&W are tight-lipped as to exactly which part of the new gastronomic emporium received Royal approval—but it was likely the art-bedecked first-floor Mount Street Restaurant, showing works by Lucian Freud, Frank Auerbach, Andy Warhol and Keith Tyson.