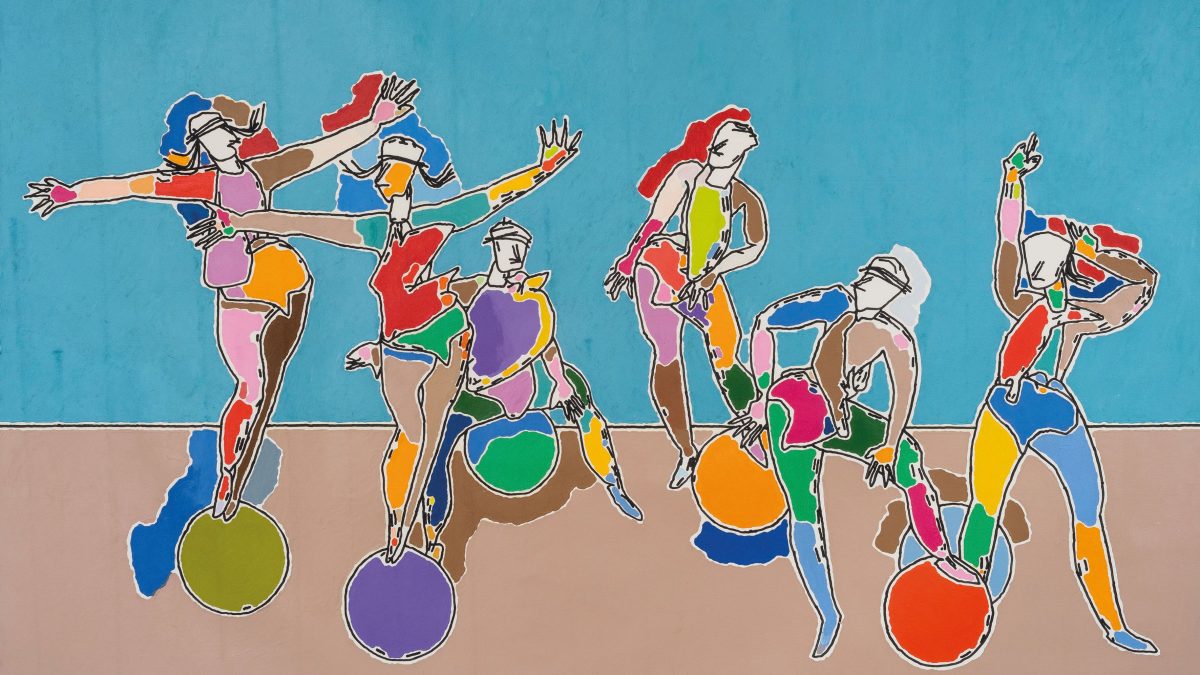 When Harold Cohen moved to the US in 1968 as a visiting professor at the University of California San Diego (UCSD), he had already flown high in the London art world; had a one-man show at the Whitechapel Gallery in 1965 during its glory days under the maverick Bryan Robertson; featured in Private View, Robertson and Tony Snowdon’s photo pantheon of the Swinging Sixties; and represented Britain at the Venice Biennale in 1966.

A planned one-year stint in San Diego turned into a lifetime on the West Coast in which Cohen became one of the most compelling and courageous pioneers in computer art. In San Diego and at Stanford University, where he was a guest scholar in artificial intelligence in the early 1970s, he found the tech culture, and the people—the generation who went on to shape Apple and other Silicon Valley giants—to foster his four-decade relationship with his drawing and painting program, AARON.

Part of the attraction of Harold Cohen: The AARON Retrospective, at London’s Gazelli Art House—which represents the Cohen estate globally—is how tightly it demonstrates the evolution of Cohen’s relationship with his program and with the machines that he made to plot or print AARON’s ever more sophisticated images on paper. The hand-drawn look he programmed—allowing randomness while setting limits on the size, proportions and relationship of codeable shapes—has a tremulous charm based on the multitude of short, straight lines that AARON used to produce circles, curves and, ultimately, the features of a human body.

With AARON’s early productions Cohen might photograph the line drawing off a screen—years before the first full-colour displays—and project it on to paper or canvas at his chosen dimensions. With one series of drawings on show at Gazelli, London at the Tate (1983)—created live in front of gallery visitors by AARON and a drawing machine built by Cohen—the program has started to fill in biomorphic forms with botanically derived detail. The biggest challenge that Cohen faced in programming art was in the use of colour. At first, Cohen or an assistant would hand colour the drawings. By the early 1990s, Cohen and AARON had mastered both the human figure and colour. Two of the standout pieces in the show are editions from Suite for Discovery Channel Online (1995), in which AARON drew and painted figurative elements live—including a man and a woman standing in front of a Cohen-esque painting—using Cohen’s robot arm, which both mixed from a choice of 17 dyes and selected the paint brushes it used.

Cohen had first been attracted to coding as an intellectual exercise—preparing punch cards to be run by the UCSD mainframe and getting the solution the next morning—but soon realised that defining drawing in code helped him to address the challenge he saw for artists who are permanently in search of new forms (reinforced for him by viewing the art on show at Venice in 1966). Cohen always programmed as an artist first, and wanted AARON to be autonomous. But the closer that moment came, the more he missed the connection with his “other half”. Not long before his death in 2016, he had added fingerpainting to their repertoire, using a touchscreen to edit colour in AARON’s drawings. “Now,” he said, “I am working almost entirely in the program’s space”. Forty-five years on, the relationship between Cohen and AARON was closer than it had ever been before.