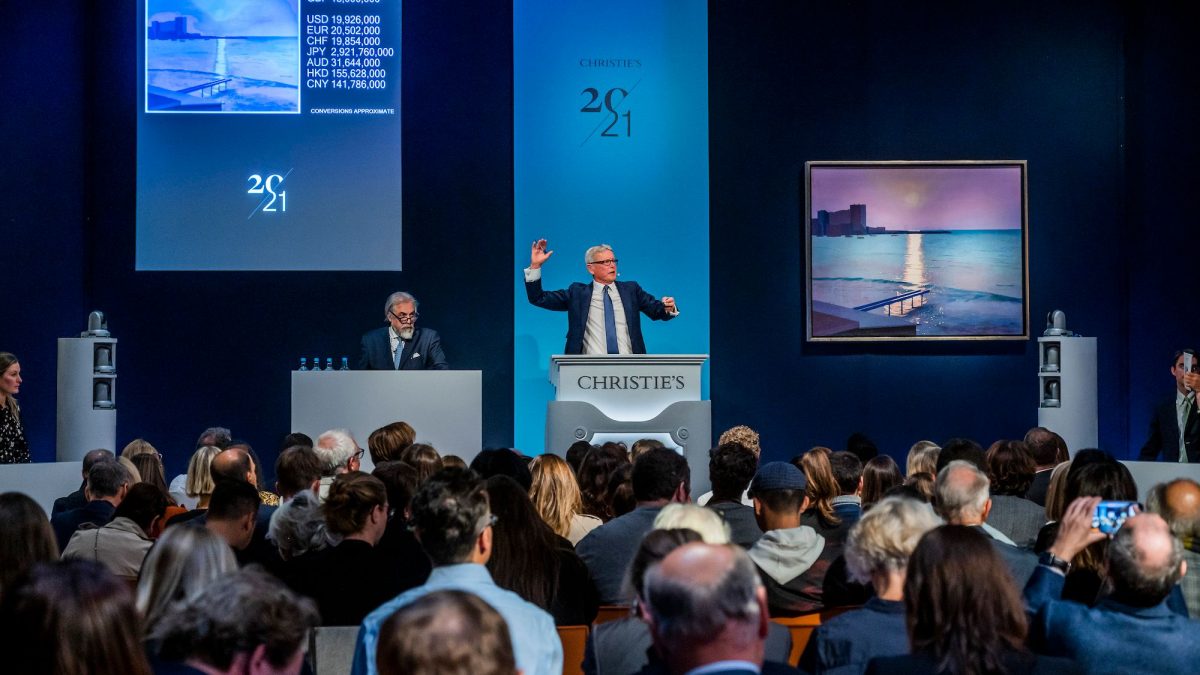 There was almost palpable relief in the room at Christie’s Thursday (13 October) afternoon, when its “evening” sale of 20th and 21st art was a 100% sell out, with works frequently performing above presale estimates and impressive moments provided by leading lots.

“This sale gives you an indication of how important this week is for London and the energy we have here,” said auctioneer Jussi Pylkkänen, at one stage of the 47-lot sale, which fetched a total £72.5m (against a presale estimate of £40.5m to £55.8m, all estimates are calculated without fees).

This is only the third year of the auction house’s new format but there was a confident energy in the room and headlining the sale certainly did no harm to David Hockney’s Early Morning Saint-Maxime (1968-69), which hammered in at £18m (£20.8m with fees), well above its £7m to £10m pre-sale estimate (three works were also withdrawn).

Lively bidding was clear for Yoshitomo Nara’s Girl with a Knife (1999) and Scott Kahn’s Croquet (1992), the latter of which managed to attract £630,000 (£793,800 with fees) more than five times over its lower estimate, prompting auctioneer Pylkkänen to call out: “Don’t hesitate, or you’ll lose it.”

The recurring question of the week is whether the weakness of the British pound is contributing to stronger sales. Certainly, the presence of multiple American bidders was mentioned, but post-sale results suggest that 62% of bidders were from Europe, the Middle East and Africa.

The second sale of the afternoon, “A Place with No Name: Works from Sina Jina Collection”, presented 73 works from the Robert Devereux collection but was largely unable to keep up the energy of the earlier event.

Despite Veronica Scarparti having to work hard in a sales room which felt less predictable and led to a couple of lots failing to sell, the overall results were stable, bringing in a total £2.9m with fees (comfortably near its £2.7m upper estimate, without fees), with 20% proceeds from the sale headed to the African Arts Trust. Demonstrating the youth of some of the market, eight artist records were also set including by hybrids, aliens and ghosts (2013) by ruby onyinyechi amanze, which sold for £17,000 (£21,420 with fees).

Nevertheless, art from Africa and the African diaspora has been a strong discussion point in London this week, no doubt buoyed by the positive reception for the 1-54 Contemporary African Art Fair at Somerset House, the current exhibition of William Kentridge’s work at the Royal Academy and a collage by the latter safely hammered in at £70,000 (£88,000 with fees). Lynette Yiadom-Boakye’s Highpower (2008) hammered in £1.15m (£1.4m with fees), attracting applause in the room.