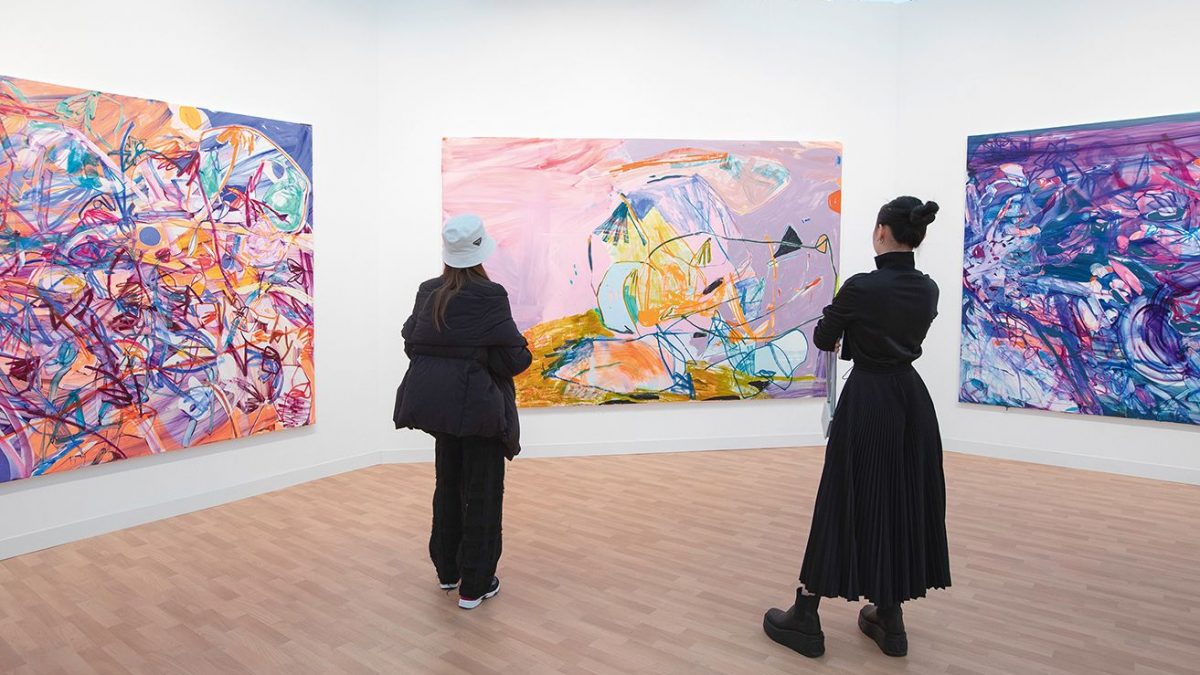 There were few signs of an impending global recession during the VIP opening of Frieze London yesterday as major galleries reported a spurt of six-figure sales to a throng of international collectors, bolstering the impression that the market for the newest art—“wet painting”, as it is known—is thriving.

On Gagosian’s stand, a suite of seven monumental paintings created this year by the 29-year-old British abstract painter Jadé Fadojutimi was already sold out by the time the fair opened. The gallery declined to comment, but sources say the works are priced at around £500,000 each. At last year’s fair, Pippy Houldsworth gallery (which represented Fadojutimi until July) sold a large painting by the artist for between £100,000 and £130,000.

Another young painter topping the auction charts, 31-year-old Flora Yukhnovich, was in hot demand at Victoria Miro yesterday. Her canvas, Fantasia (2019), flew off the wall for around $2m, having been sold back to the gallery by its previous owner. Primary market prices are a lot lower, says the gallery’s partner and director, Glenn Scott-Wright—“but if it’s secondary, it has to be in that ball park”. Yukhnovich’s auction record currently stands at $3.6m.

The boom has nothing to do with art history, criticality or aesthetic value

Tiwani Contemporary, meanwhile, sold out its stand within the first hour. The London gallery is showing new paintings by two rising stars: Umar Rashid (prices range from $45,000-$75,000) and Joy Labinjo (£50,000 each).

The sales follow a report published by Artprice last week focusing on auction results for works by artists under 40, which reveals the ultra-contemporary art market is booming, generating $420m between July 2021 and June 2022—a 28% increase on the previous year. The average price of the top five works has leapt from $618,000 to $4.9m.

Though still a small share of the overall art market (2.7%), one of the most compelling aspects of the ultra-contemporary segment is that, contrary to the traditional model, it is being led by women and Black artists.

According to Artprice, half of the $200.9m hammered for ultra-contemporary art in the first half of 2022 came from ten artists, seven of them women: Ayako Rokkaku, Flora Yukhnovich, Avery Singer, María Berrío, Anna Weyant, Christina Quarles and Loie Hollowell. Amoako Boafo, from Ghana, and the American Ivorian artist Aboudia Diarrassouba also feature in the top ten. All of the new stars are painters, most of them straddling the line between figuration and abstraction.

While some say art history is being rewritten, others believe galleries, auction houses and investors are cynically cashing in. “This boom has nothing to do with art history, criticality or aesthetic value,” the New York-based art adviser Lisa Schiff says. “It is information arbitrage and is purely about money. It is too soon for any art history to be written.”

More “disturbing” than the frenzy itself, Schiff says, is the way galleries are raising primary market prices in response to artists’ auction prices “prematurely and at unprecedented speed and heights”. She adds: “It seems to me this is a suicidal move for a young artist. There is nowhere to go but down. What are the galleries thinking? I don’t know a single collector who is buying this shit.”

But buying they are—if the press releases are to be believed. Whether via Instagram, from galleries or—if they can’t get on those lists—at auction, collectors (many of them new to the market themselves) appear to have a deep thirst for fresh talent.

So much so that auction houses are now dedicating entire sales to the “new” or the “now”—and, in the case of Sotheby’s Artist’s Choice channel, selling works directly from artists’ studios (even if the profit margins on such sales are not significant). As one anonymous dealer puts it: “Today, you can’t divorce the market from the studio. The auction house is inextricably linked to the gallery, which is inextricably linked to the studio. And that’s all linked to the public. It’s this one great big biomass that feeds off each other.”

The crucial question is whether the current feeding frenzy can be sustained. After all, early commercial success carries with it enormous pressure—and a runaway secondary market can cause resentment. Earlier this week, the artist Issy Wood took to Instagram to denounce the “scumbags” auctioning her works.

“I don’t think the current frenzy is sustainable,” says one prominent dealer. “The fireworks will dwindle for those artists who aren’t picked out by the collectors who have the power to cement reputations.”

Giles Huxley-Parlour, of the eponymous gallery, says the current trend “will not hold steady in the long term”. He adds: “For every flash in the pan, there is still a very solid market for historically important artists whose prices are consistent and have been going up for decades.”

Noting how discretionary spending has been down over the past six months, even among very wealthy collectors, Huxley-Parlour thinks the “buzz” around ultra-contemporary artists is hiding a “deeper malaise in the broader art market”. He adds: “A lot of people are biding their time and watching what will happen in the next six months.”

In hard times, blue-chip art is often considered a hedge against inflation—so, can the same be said for ultra-contemporary works? “No,” Schiff says. “I would not recommend

. I don’t consider ultra-contemporary as blue-chip yet.”

Marc Glimcher, the president and chief executive of Pace Gallery, agrees, particularly when the prices for young artists are bloated by auction results. “Things that are hyper-inflated are not a good hedge against inflation,” he says. “But that’s not to say there’s not real consensus around some of these artists’ work; when Picasso was in his 40s, there was real consensus around his work.”

Consensus there may be, but, addressing the way the art market usually

lags behind broader economic realities, Glimcher warns, “if our governments continue to act with unbridled stupidity, then we have got a problem. It’s going to start really melting wealth—and the art market is going to feel it like everybody else”.