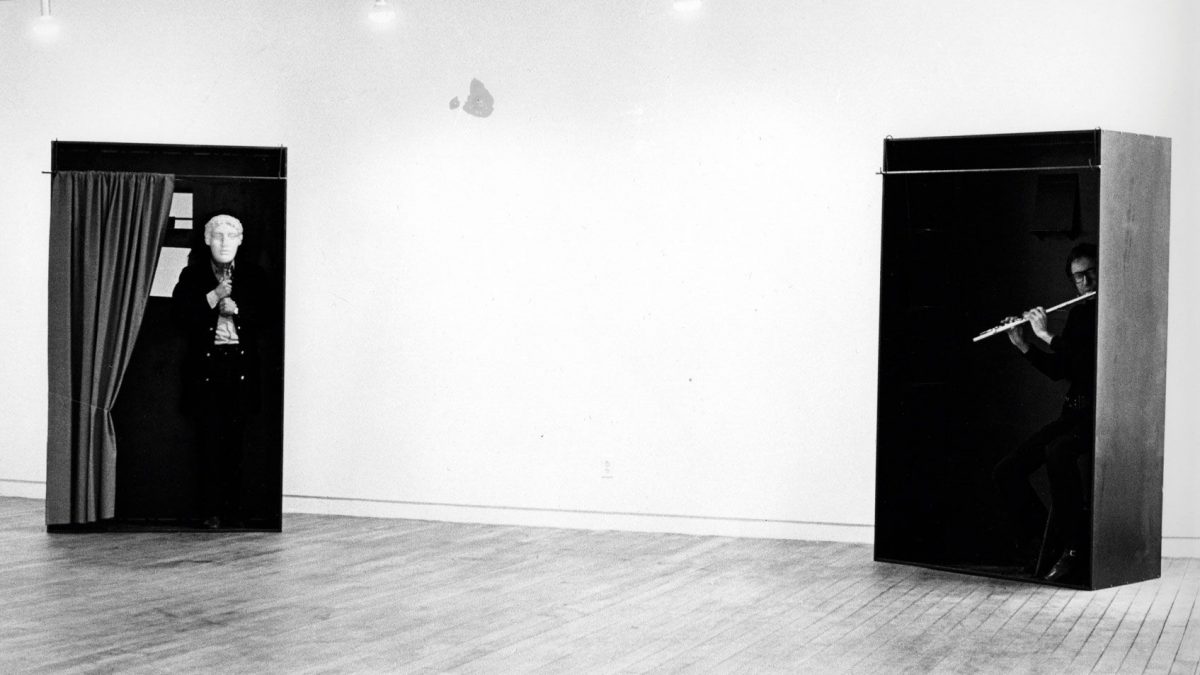 For his first exhibition in the US, at Sonnabend Gallery in 1972, the Greek-Italian artist Jannis Kounellis (1936-2017) presented several performances. One of them, in which the artist stood in a large metal box wearing a mask of Apollo, the mythological god of light and music, while a flautist played fragments of Mozart in another box, was long thought lost, the materials and instructions for the performance unseen for 50 years. But the untitled work was recently rediscovered, hidden in the archives of the Sonnabend Collection in New York, and will be presented again at the Walker Art Center today at the opening of the first major exhibition of the artist’s work in three decades, Jannis Kounellis in Six Acts.

“Kounellis remembered that this work was sold to Ileana Sonnabend,” says Vincenzo de Bellis, co-curater of the show, and started planning it while the artist was still alive. “But nobody could really trace it. There were no invoices whatsoever. This work never showed up in any other show and basically was considered lost.”

As the Walker exhibition came together, shifting from a performance-focused show to a survey of the major themes in Kounellis’s work, De Bellis knew he wanted to track down the missing piece. “I’m stubborn and I don’t like ‘no’ as an answer,” De Bellis says. “I desperately wanted a performative aspect in the show to give credit to what we had initially thought of at the beginning.”

The curator asked the directors of the Sonnabend Collection, Antonio Homem and Queenie Wong, if they could find any trace of the work in their archives. “Then one day they emailed us saying that they had found the metal boxes and after that they said, ‘We have all the elements’.” So De Bellis decided to restage the performance for one night only, for the Walker show’s opening preview. “That performance was done 7 October 1972. Our show opens 14 October 2022. So, 50 years and one week later.”

The Apollo mask was a recurring element in Kounellis’s work, sometimes worn by the artist in other performances (including one filmed by Bill Viola, which will be in the show), sometimes broken into plaster fragments that were placed in his wall-like installations.

Two other performances will be staged during the opening, both also involving music, one of the show’s other recurring themes. While such works are more ephemeral than his more weighty installations and canvases, Kounellis would consider them just another extension of his experimentation into what forms painting could take. “He would never call them performance,” De Bellis says. “He always described himself as a painter, so his thinking was always about how painting can be re-envisioned or reconsidered.”

The exhibition will include more than 50 works from throughout Kounellis’s career with galleries divided into six thematic “acts” rather than presenting work chronologically. “[Kounellis] never believed in a chronological development of the work,” De Bellis says. “In his words, he always considered the work to be contemporary and to speak the language of the time.”

The decision to focus on recurring subjects in Kounellis’s work—language, journeying, fragmentation, nature and musicality—follows the artist’s own “circular thinking”, De Bellis says. “He believed that art—like life—is made out of cycles and bands and waves; it’s never a trajectory that brings you from A to B to C to D.”

A catalogue published in connection with the show includes Kounellis’s own writing and interviews about his work selected by his estate, some of which have never been published. “There are many important things in the book for me—one of them is the format,” De Bellis says, explaining that the catalogue is the same size as the first edition of James Joyce’s Ulysses and shares features of its typographic layout. “Kounellis described himself as a Ulysses without an Ithaca [the legendary Greek king’s island home], all the time. It’s a homage to this.”