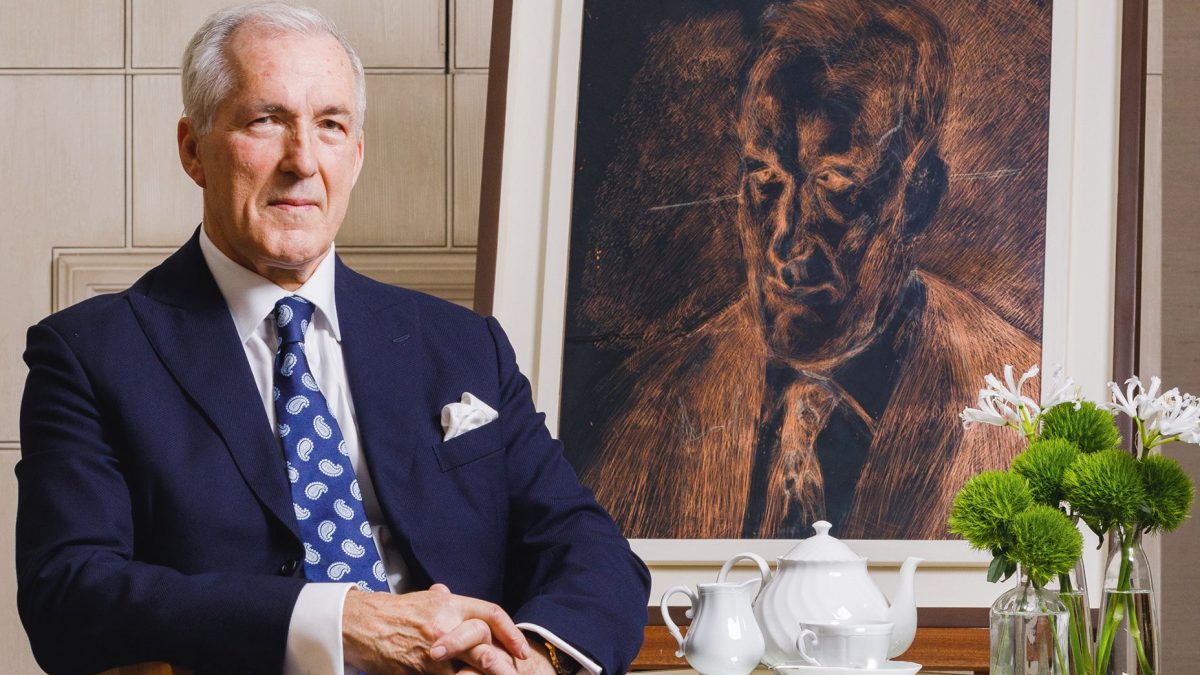 Before his death in 2011, the revered British painter Lucian Freud dined nearly every night in the sumptuous surroundings of the Wolseley on Piccadilly. He would often be joined by his friend Jeremy King, the restaurant’s then co-owner.

They got to know each other in the 1980s, when King and his business partner Chris Corbin ran Le Caprice, then one of the most fashionable restaurants in London, with a starry clientele including Princess Diana, Mick Jagger and Elizabeth Taylor. King and Corbin’s empire also included the Ivy, the Delaunay and Brasserie Zédel, among others. However, an acrimonious battle with an investor saw King ousted from his remaining establishments earlier this year.

King started collecting art in the 1980s and his collection now includes pieces by the Boyle Family, Fiona Rae, Richard Hamilton, Andy Warhol and Damien Hirst, among others. He sat for Freud many times and was the subject of one of his final works—an etching on copper, which was never printed. The original copper plate, replete with Freud’s scratches and chalk marks, is being offered at auction at Sotheby’s during Frieze week.

Jeremy King: Ever? Gosh, not sure I can remember but I did particularly enjoy the results of taking a chance on buying a self-portrait by Richard Hamilton executed in make-up. It was from a charity auction in 1982 sponsored by [defunct cosmetics brand] Charles of the Ritz, hence the make-up, which everyone said would fade even worse than acrylic, but

A portrait of Marilyn Monroe by Eve Arnold.

Probably a 1980s portrait of me by Tom Phillips—it has so much history and memories within.

Although not normally my style of painting, it would be Poussin’s A Dance to the Music of Time (1634-36)—for reasons all tied up with Anthony Powell.

I am still deeply regretting not listening to [art dealer] Hester van Royen’s advice about buying a Thomas Struth from Waddington [Custot]’s, which has haunted me ever since and I haven’t seen again.

I was also foolish in 1994 when I had built a new glass house designed by Future Systems and had run out of money. It was about to be photographed for Vogue, and the Michael Craig-Martin murals hadn’t been painted yet, so I turned to the most exciting new gallerist, Jay Jopling, and asked for a loan. He obliged with a very early large Damien Hirst spot painting which was ideal. Having kept it far too long, Jay then asked if I wanted to buy it. I did, but was too strapped for cash and said the £7,000 was too much. Stupid of me!

I won’t take the credit for it but I was proud to be a trustee of Artangel and privileged to be part of the extraordinary site-specific works that Michael Morris and James Lingwood created in a myriad of unimaginable locations.

I don’t have a large enough dining table and the choice would be invidious anyway.

“If you love it, don’t give a fuck what anyone else thinks.”

The closest I have got is to watch films on at the National Film Theatre.