‘If you love it, don’t give a fuck what anyone else thinks’: restauranteur Jeremy King on what he collects and why

Abbas Zahedi: Meet the former doctor and MC who is this year’s Frieze Artist Award winner 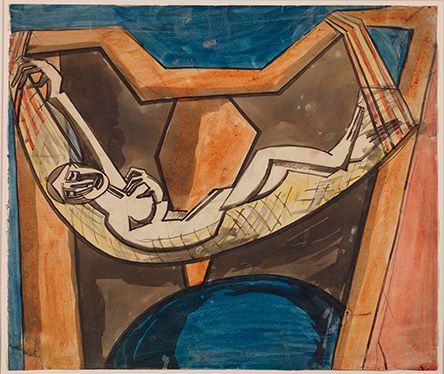 The angular figure in Vorticist composition (Black and Khaki) (around 1915) by Helen Saunders bursts out of the barrel of a gun. Unlike some of the pre-war examples of Vorticism—a short-lived but explosive British take on Cubism and Futurism—it seems to evoke the human cost of mechanised warfare rather than glorifying it.

Saunders was one of only two women in the Vorticist group alongside a dozen male artists, including its founder Wyndham Lewis, Jacob Epstein and Henri Gaudier-Brzeska. The movement’s main output was two group shows, one in London, one in New York, and two issues of the magazine, Blast. Saunders was included in both shows and had her work and writing featured in the second edition of the magazine, which she distributed from her home in London’s Chelsea. (Her surname appeared as “Sanders” in an apparent bid to spare her family any social embarrassment.)

Vorticism fizzled out as the carnage of the First World War became a reality, the romance of mechanisation receded and many of its members were recruited to the war effort, including Saunders, in an office role, and notably Gaudier-Brzeska, who wrote a piece from the trenches for the second edition of Blast shortly before being killed.

Born in 1885, into a well-to-do family in Ealing, Saunders studied art at the Slade and the Central School of Arts and Crafts, and exhibited alongside artists from the Bloomsbury Group, including Roger Fry, Duncan Grant and Vanessa Bell.

Although Saunders continued to make work after the war, she took a step back from the art world in a kind of “self-imposed isolation”, according to her descendant, Brigid Peppin, “rejecting professional groupings”. She continued to make work, but in a style harking back to the Post-Impressionists that she admired, in particular Paul Cézanne. The French artist painted several landscapes around L’Estaque, in the south of France, and four watercolours from the 1920s made when Saunders visited the village are in the show, including a geometric painting of Cézanne’s house.

The 18 works in this small show remained in Saunders’s family after her death in 1963 before being donated to the Courtauld in 2016 by Peppin. There have been few exhibitions of the artist’s work since the end of the First World War, a notable exception being a survey at Oxford’s Ashmolean Museum in 1996. “The disappearance of much of Saunders’s early work and the dearth of biographical information has hampered research and obstructed arguments for the artist’s centrality to the Vorticist project,” writes the art historian Jo Cottrell in the catalogue. But recently there has been renewed interest, with her work being included in two group shows: Radical Women at Chichester’s Pallant House Gallery (alongside her fellow female Vorticist, Jessica Dismorr) in 2019; and last year’s Women in Abstraction at the Centre Pompidou in Paris.

Three gouaches from the 1917 New York Vorticist show were rediscovered in Chicago in 2009, while the four oil paintings she had shown in London were all thought to have been lost until a recent discovery of one of them beneath a painting by Wyndham Lewis.

Lewis was well known for falling out with many of the Vorticists, including Saunders. A possible result of this estrangement might be the reason why Lewis painted over Saunders’s Atlantic City (around 1915), which she had exhibited in the first Vorticist show. The lost work was found and identified after Lewis’s Praxitella (around 1921) was brought into the Courtauld conservation unit in 2019, when two students made the connection between the x-rayed image underneath and an image of Saunders’s work reproduced in Blast. The painting and technical analysis will form a small display accompanying the exhibition, helping to place an artist who was literally painted out of art history right back in the centre of the vortex.