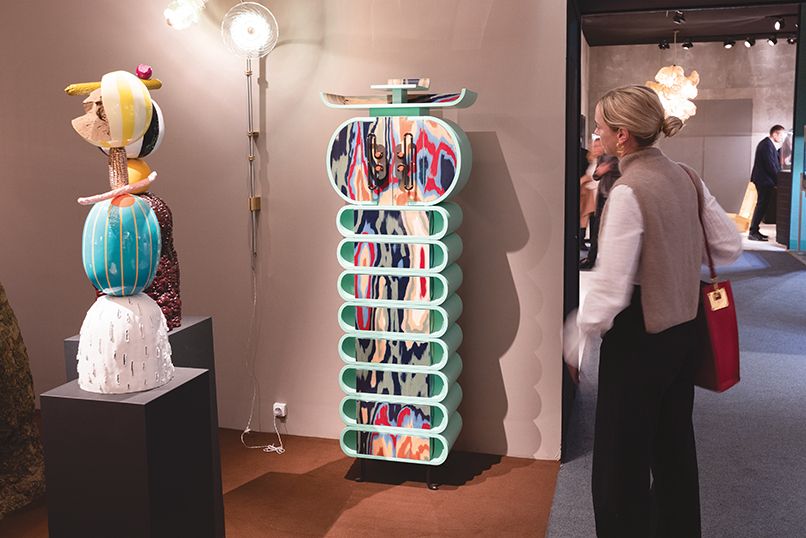 While the seemingly infinite tents of Frieze London and Frieze Masters sprawl over acres and acres of Regent’s Park, the concurrent design and art fair, PAD London (until 16 October), is a more bijou affair. It returns to its usual home in the middle of Mayfair’s Berkeley Square this month after two years of online-only activity. Like its sister fair in Paris, PAD London focuses on the intersection between art and design, and has a strong showing of one-off pieces of contemporary design, as well as classic Modernist furniture, art and jewellery. Patrick Perrin, the fair’s founder and CEO, says it has “a commitment to break down barriers between the disciplines of art, design and jewellery in order to foster creativity”. Here, we pick out some of the most colourful and quirky works on offer.

Disney’s Alice in Wonderland was on “hard rotation” in the childhood home of the London-based multidisciplinary artist Bethan Laura Wood. Like the inquisitorial, hookah-smoking caterpillar in that film, this cabinet draws itself up on spindly feet, the folds creating space for drawers and the head a small cupboard with hidden shelves. The piece is based around the multi-coloured veneer on its front. The designer worked with the Italian manufacturer ALPI; the varied patterns rejected as part of their development process were perfect for Wood’s one-off pieces. “I love playing around within more large-scale industries and finding these moments within the production that create unique patination or colouration,” she says.

Paris-based ceramics artist Saraï Delfendahl makes strange, dreamlike animals. Her works are full of tiny details rendered in an almost naïve style, brought to life by colourful glazes. She acknowledges several artists as inspirations: “Currently, I think most of the time of Dubuffet—his pictorial materials, all the footprints and traces he made in his paintings,” she told website The Art of Tomorrow. “Gauguin was also an influential master, with his knowledge of colours. And, of course, Chagall and his world of imagination and beauty.”

This wall-mounted textile sculpture is enticing to touch, but it is strictly forbidden. It is made from untreated Icelandic wool brushed into super-soft, three-dimensional forms using a special technique developed by the Danish artist Signe Emdal. Even the lightest touch would leave a trace on its delicate surface. This work is named after the Hindu goddess Tara, who has 21 forms.

All the pieces in PAD are created by skilled craftspeople, but none are made with such dedicated expertise as this set of sculptural lights. The cloudlike forms that encase the LED lights are woven by silkworms placed onto a mould then left to do their stuff. The resulting material looks ethereal but is actually quite robust. The cocoon lamps are mounted on wooden branches found on the forest floor by the Paris-based designer Diane de Kergal, who says she was inspired by Isamu Noguchi’s paper lamps. The three lamps pictured here were envisaged as an ensemble: two trees and the moon.

The colour of this chandelier, by the Italian designer Achille Salvagni, can be created bespoke for each client, allowing purchasers to harmonise it with the rest of their space—or their art collection. This example has been colour-matched with the Fernand Léger painting hanging behind it. Despite the name, the “spider” chandelier has six arms. The body is made from painted bronze, its solid industrial appearance contrasting with the luxurious gilded lampheads, the lights from hand-carved translucent onyx, sourced near Salvagni’s studio in Rome.

The fabrics wrapping the higgledy-piggledy cushions on this whimsical swinging chair mash together centuries of design influences, from 19th-century French decorative art through to a bold tartan and a nautical blue stripe. This unique piece was made in 2000 by the French design team Elizabeth Garouste and Mattia Bonetti; it is in pristine condition as the previous owner covered the seats in plastic. The white gold-leaf on the iron frame is delicate but the dealer from Paris-based Galerie Kreo assures us that it is sturdy enough for some Fragonard-inspired swinging.