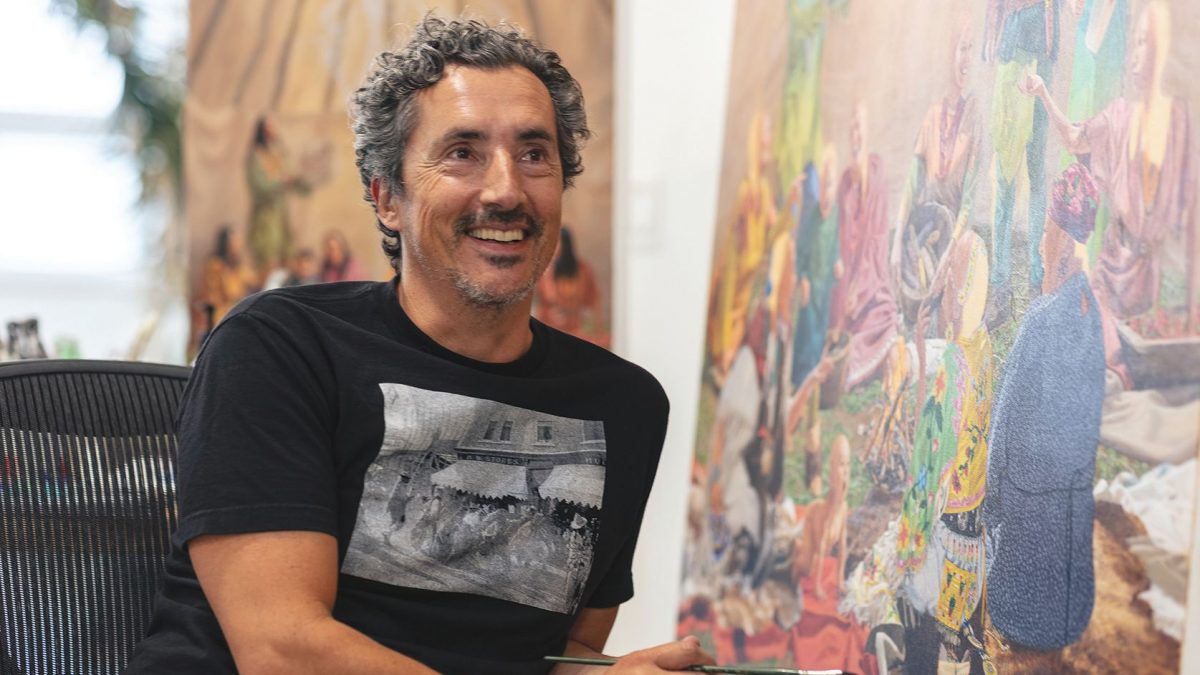 Although he has worked across various mediums, the Cree and Canadian artist Kent Monkman is now best known for his large-scale figurative canvases. They harness the grandest traditions of Western history painting to challenge the colonial bias of art history and institutional collections. His interventions in public art museums often explore themes of colonisation, sexuality, loss and resilience.

In 2019, in his most significant show to date, Monkman exhibited a pair of monumental canvases in the Metropolitan Museum of Art’s Great Hall, which responded to some of the New York institution’s masterpieces while also provocatively reimagining the traditional narratives of white settlers through the eyes of Indigenous peoples. Featured here, as in so many of Monkman’s works, was Miss Chief Eagle Testickle, his flamboyant, feisty, gender-fluid alter ego, who appears not as a downtrodden victim of settler subjugation but a glamorous supernatural being. She is also a prominent protagonist in Being Legendary, Monkman’s new show of more than 30 paintings as well as objects and texts, which opens at the Royal Ontario Museum (ROM) this month (8 October-19 March 2023).

The Art Newspaper:You have predominantly made work in response to museums with art collections. But for Being Legendary you have engaged with objects from ROM’s geological, palaeontological and anthropological collections. What was your starting point?

Kent Monkman: It began with a conversation I had in 2017 with the director of the ROM, Josh Basseches, who told me the museum didn’t have any material—objects or art—that speaks to the legacy of residential schools [controversial boarding schools for Indigenous children]. In Canada, residential schools had a devastating impact on Indigenous peoples. It was a policy designed to erase us, to erase our languages, and to remove children from their cultural heritage and their families. They put children into work camps and thousands never came home.

The ROM is one of the most important museums in the country [but it] has no way of bridging this lack of information that multiple generations of Canadians have experienced—because it wasn’t taught in schools. It’s Canada’s dark secret, and to understand Indigenous people, where we came from and where we are now, that is part of the story.

In the ROM show there are paintings and texts that make coruscating references to the brutal policy that the Canadian government enforced for over a century, but the story you trace also goes back millennia earlier.

One of the big attractions at ROM are the dinosaur fossils. Tens of thousands of schoolchildren and adults who go every year are fascinated by those things, and I love them too. It got me thinking, what have Indigenous children been taught about these ancient giant creatures? What do we know about these fossils that were extracted from our land? I wanted to talk about the interruption of the knowledge that Indigenous children were taught by their ancestors, which began in the colonial period. As the project evolved, I realised that our stories—so often dismissed by settler cultures as cute, quaint or folkloric—hold science, they hold knowledge. We have stories that talk about one of the mass extinctions, we have stories and words in our Cree language that speak about the receding of the glaciers. There’s science in these stories, and Indigenous science is a very vast field. We have star knowledge, we have botanical knowledge, we know about our land. And this knowledge is embedded in our Cree language and culture. We’ve been here much longer than the settlers want to believe or want us to believe about ourselves.

You tell this story through the voice and image of your alter ego Miss Chief Eagle Testickle. This time-travelling, shapeshifting being has featured in your work for some years now. Where does she come from?

Miss Chief was created to inhabit a more empowered understanding of Indigenous gender identities and sexuality. When the settlers came, they encountered people who lived in the opposite gender. We had a place for these individuals, whether they were assigned male at birth and lived in a female role, or vice versa. In old Cree there were no words to distinguish gender because it just didn’t matter. A person’s gender or their sexuality was irrelevant and there were no words for it. There was a more fluid understanding and acceptance of sexuality.

One of the first paintings I made of the Miss Chief character was of her painting a portrait of a cowboy, and it just grew from there. She was born out of this desire to reverse the gaze and say, “Hey, as much as you’re looking at us, we’re looking at you.” She represents a very empowered understanding of Indigenous sexuality and gender. And she’s a badass.

Being Legendary may not pull its punches in addressing cultural atrocities but humour is always present too.

Humour is integral to my work. It’s part of our cultural way of looking at the world, and also my way of transcending my own family’s history and my own identity. I’m Cree and our Creator is a trickster character, and so we have an inherent sense of humour in our way of looking at the world, which I think is also key to being able to deal with some of these dark episodes.

As the ROM project evolved, I realised that the colonial period is really just a little blip in this long timeline of our existence here. And it got smaller and smaller, but it was still a necessary thing that had to be dealt with in the telling of this story of interruption of knowledge. I also wanted people to realise that there was a long [period] before, and now we’re going into our after period, and that we do not want to be defined by the colonial era. This period was devastating for us, but we are so much more: we were here, and it’s such a rich existence.

Your giant figurative canvases channel the grandest of history painting traditions. Why did you choose to work this way?

When I first started painting, I was an abstract painter, inheriting the painting traditions of the Abstract Expressionists. I was on this quest to find my unique way of making a mark, whether it was a drip or a splash or a stripe. But the language I evolved was so personal I wasn’t able to communicate the themes that were urgent to me—about my community, my own family and the impact of colonisation.

Then after making abstract paintings for many years, I just did this 180-degree turn and returned to a representational image making and disappeared my hand. For me that was a maturing moment as an artist.

It’s interesting that you choose to work on such a scale and with so many quotes from the old masters of European art history, whether Peter Paul Rubens or Eugène Delacroix, or traditional grand-style Americans such as Winslow Homer.

I’m a huge fan of the power of history painting because there’s such an impact when you stand in front of a history painting. There’s an authority that comes through the scale, the compositions and the gestures. I wanted to authorise our experiences into this canon, because it is such a powerful medium.

There’s no faking here: this is about constructing paintings from the ground up and understanding how they’re made, to explore what’s possible in terms of human emotion and expression. It’s cool to watch when people engage with the work because at first they think they’re seeing one thing but then it’s the opposite. I’m using a similar medium to the painters of Western art history but communicating a worldview that is radically different to the original that I’m drawing inspiration from. I’ve reversed the gaze and now I’m saying, okay, now this is us looking at you.