Within Ann and Gordon Getty’s $180m collection, bound for Christie’s, a musical theme makes itself both seen and heard 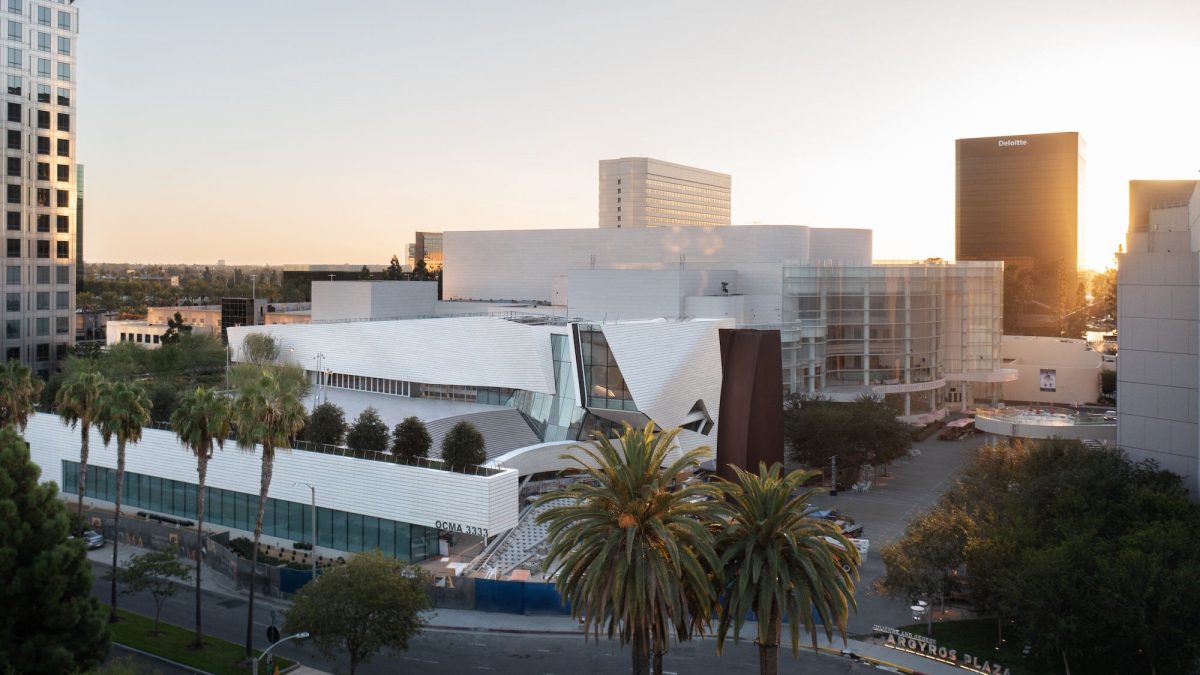 Architect Thom Mayne of the Los Angeles firm Morphosis says in his line of work, “everyone has one”: a building project that threatens to never end. In his case, it is the Orange County Museum of Art (OCMA), which he began designing 14 years ago and which is only now coming to completion with a 24-hour-long opening celebration starting on 8 October.

The 53,000 sq. ft, $94m building is meant to be the last major addition to the Segerstrom Center for the Arts, a cluster of performing arts venues in the ritzy suburban shopping destination of Costa Mesa, south of Los Angeles. And it is by far the most dynamic of the bunch: an edgy and curvy building clad in white terracotta tiles, with a soaring, angled atrium that provides startling glimpses of sky, into galleries and of visitors walking on glass footbridges above. The geometry of the atrium evokes Marcel Duchamp’s painting Nude Descending a Staircase, No. 2 (1912), which famously made an early critic think of an explosion in a shingle factory.

Another major feature is a set of wide outdoor stairs leading to the rooftop terrace, meant to create a place where people can meet up, have coffee or just relax. “We were really interested in creating a social space like the New York Public Library steps or the Met [museum] steps,” says Mayne, 78, who made an expansive indoor staircase a popular feature of his Cooper Union building in New York. “We wanted to create something very urban for this suburban environment.”

The museum’s director, Heidi Zuckerman, compares the new grand staircase to Roman architecture such as the Colosseum because of its curved form. She joined OCMA in January 2021 but has been able to put her stamp on the galleries, first by scrapping plans for industrial lighting fixtures against a dark ceiling in favour of diffused white light in a louvred,

fabric-covered ceiling system and secondly by ensuring the light switches and outlets in the galleries, which are painted a clean white, remained hidden. She also secured free admission for the next ten years with a $2.5m grant from Lugano Diamonds.

Leadership changes—three regimes in the past decade—played a major role in the project delays. While Mayne is diplomatic about it, he concedes that there were “competing visions” for the museum building, including a jettisoned proposal to create residential apartment towers.

“There were definitely various levels of ambition and desire, with someone saying ‘let’s build something three times bigger’ and someone else saying, ‘No, let’s build something we can afford’,” he says. The museum had previously owned a space in neighbouring Newport Beach, but it was too small to show off the permanent collection.

In many ways the new OCMA relates to the Perot Museum of Nature and Science in Dallas, where in 2012 Morphosis created a dazzling atrium and plenty of multi-function public space.

Zuckerman, who previously led the Aspen Art Museum and its Shigeru Ban construction, describes the Orange County museum as “a post-Covid building”. “You come into a space that is gracious, warm, light-filled. It isn’t stuffy. You don’t feel trapped and you have access to the outside,” she says. “You can feel the temperature and you can see the light.”

She is also working to make the museum a place of rest and refuge, recognising that anxiety has been a major byproduct of the pandemic. “Addressing the creature comforts [was] important. There are tons of benches and bathrooms and there are places to eat,” she says. “Our idea of a post-pandemic museum is not just about the architecture, it’s about the visitor experience. On a hot day, we will give you cold towels. On a cold day, we will give you hot towels.”

The inaugural exhibitions include a survey of Light and Space artist Fred Eversley, a reprisal of the California Biennial (which has been on hiatus since former OCMA curator, Dan Cameron, bizarrely refashioned it into the California-Pacific Triennial in 2013) and 13 Women, a show curated by Zuckerman that nods to the museum’s female founders. Sanford Biggers was enlisted to made a monumental new sculpture for the rooftop terrace.

Even though Mayne is often grouped with architects known for their relationships to visual art and artists, this is his first art museum. Is Mayne concerned that his museum will compete with the works of art inside? “Not at all,” he says. “The atrium is the most dynamic space. But we separated the atrium and foyer from the galleries. When you get to the galleries, it’s absolutely the opposite, completely neutral, so you can focus on the artworks instead. Your memory of your museum visit will clearly be the artwork in the gallery.”