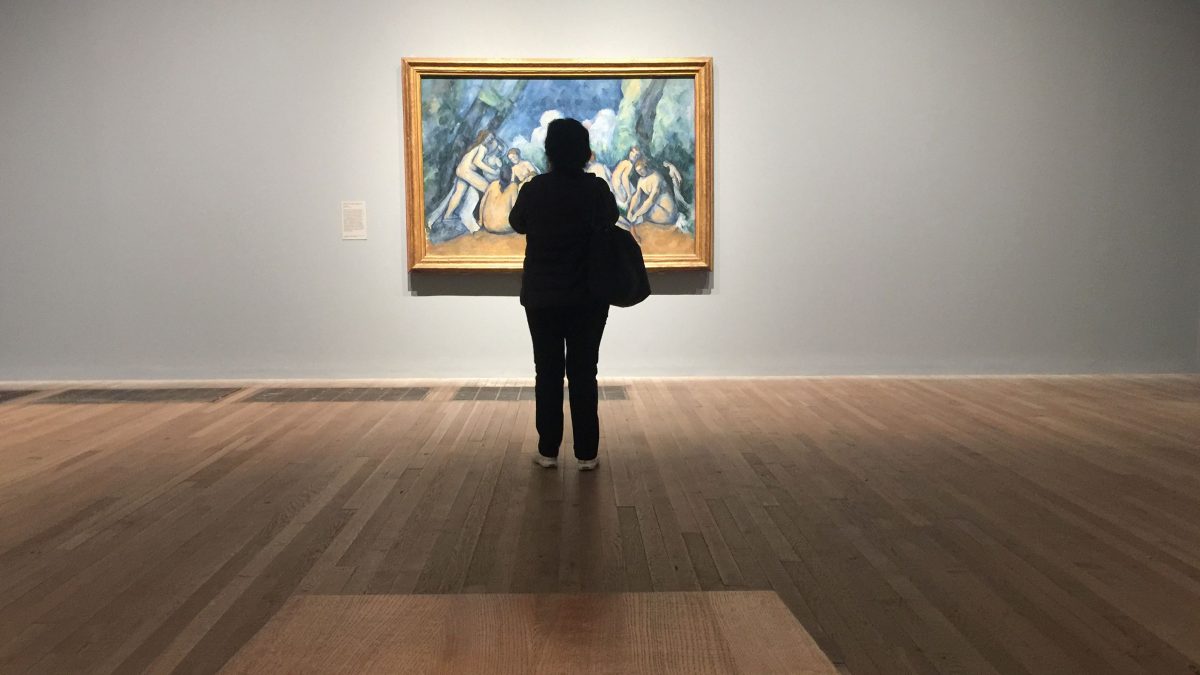 The star of Tate Modern’s Cézanne show (5 October-12 March 2023) will be a painting that initially had to be protected in a high-security frame because of fears that it would be vandalised.

Philip Hendy, the director of the National Gallery in 1964, had warned his board that “for security reasons… the Cézanne should be displayed behind a perspex shield” during the first few months of public exhibition.

There were other “extraordinary security precautions”. Rather than being integrated into the displays, The Bathers was hung in the boardroom, which was opened up to visitors. During the day there were guards on each side of the picture, with a dog patrol at night.

The National Gallery’s The Bathers is among the largest paintings of one of Cézanne’s favourite subjects, dating from late in his career. Arguably the greatest, the two other major versions are now at museums in Philadelphia in the US—the Barnes Foundation and the Philadelphia Museum of Art.

The Art Newspaper has tracked down the astonishing story of the acquisition of London’s The Bathers, using declassified gallery records.

In 1907, a year after Cézanne’s death, the picture was bought by the artist’s greatest collector, Auguste Pellerin, and in 1964 it was put up for sale by his granddaughter, Madame de Chaisemartin. The National Gallery, which had come late to acquiring Post-Impressionism, was desperate to acquire it.

Raising £475,000 represented a challenge, but behind the scenes the gallery managed to win support from the property developer Max Rayne, who agreed to put up £225,000. This was then the largest cash donation ever to the National Gallery.

But just over half the price still had to be found. Eventually the gallery convinced the Treasury to offer a special £125,000 acquisition grant and early access to the following year’s £100,000 grant. This meant that the gallery only needed to find £25,000 from its own funds.

Winning Treasury support was particularly complicated because of a change of government while private discussions were under way. Harold Wilson, the Labour leader, had won the general election on 15 October 1964, with the new chief secretary of the Treasury giving his final approval for the Cézanne grant on 2 November.

At a meeting on 6 November 1964, the National Gallery board under its chairman Lord Robbins approved the purchase. The sculptor Henry Moore, a trustee, told his colleagues that The Bathers represented “the monumental phase of Cézanne’s art”, which could be compared with the work of the Old Masters.

The ‘magic of a name’

The sale was sealed on 15 November and announced five days later in Parliament. Had it not gone ahead, The Bathers would almost certainly have been sold to an American museum.

But the acquisition proved highly controversial. The National Art Collections Fund (now the Art Fund) was inundated with complaints from members, who threatened to cancel their membership if a grant was offered. The fund ended up not supporting the acquisition.

Publicity produced a storm of protests. The Sun newspaper ran an article under the headline: “We paid a fortune for a picture hardly worth a place in a second-rate gallery.”

Douglas Cooper, the distinguished (but controversial) art historian specialising in Cubism, wrote a letter to the Sunday Times: “I can only laugh at the gullibility of those who are so blinded by shame and the magic of a name that they cannot recognise a most undesirable failure.”

Alan Bowness, then director of the Tate

In a private letter to Hendy, Alan Bowness, then director of the Tate, took a very different line: “I can’t think of any picture in private hands I would rather have seen enter the National Gallery. It may never become tremendously popular but it is the kind of picture one keeps on returning to and I’m sure it will always be an inspiration for painters.”

Surprisingly, the Treasury’s generous grant had apparently only received lukewarm support from Labour’s incoming arts minister, Jennie Lee. After Lee’s visit to the National Gallery on 2 January 1965, six days before The Bathers was unveiled, Hendy admitted that she “had not appeared to appreciate the Cézanne”.

This was not the first time that Cézanne’s work had provoked strong emotions. In 1934, when the National Gallery accepted the loan of Samuel Courtauld’s Montagne Sainte-Victoire with Large Pine (around 1887), the then director Kenneth Clark recommended that the painting should be glazed: “It is especially necessary with the Cézanne as it is just possible that some enraged die-hard might assault it.”

Not only will The Bathers be a key painting in Tate’s Cézanne show, but it will also be the main attraction in the After Impressionism exhibition at the National Gallery in London (25 March-13 August 2023). The Bathers will never be sold, but its value today would be well over £100m.

Bringing the story up to date, the director of the National Portrait Gallery, Nicholas Cullinan, is now exploring the possibility of applying for a special Treasury grant to help buy Joshua Reynolds’s Portrait of Omai(around 1776), which has been export-deferred until next March with a £50m price tag.

No Treasury grants have been given for any museum acquisitions since the 1970s, and in the current circumstances the chance of winning government support might appear slim. But in very different ways, Portrait of Omai is just as important as The Bathers.