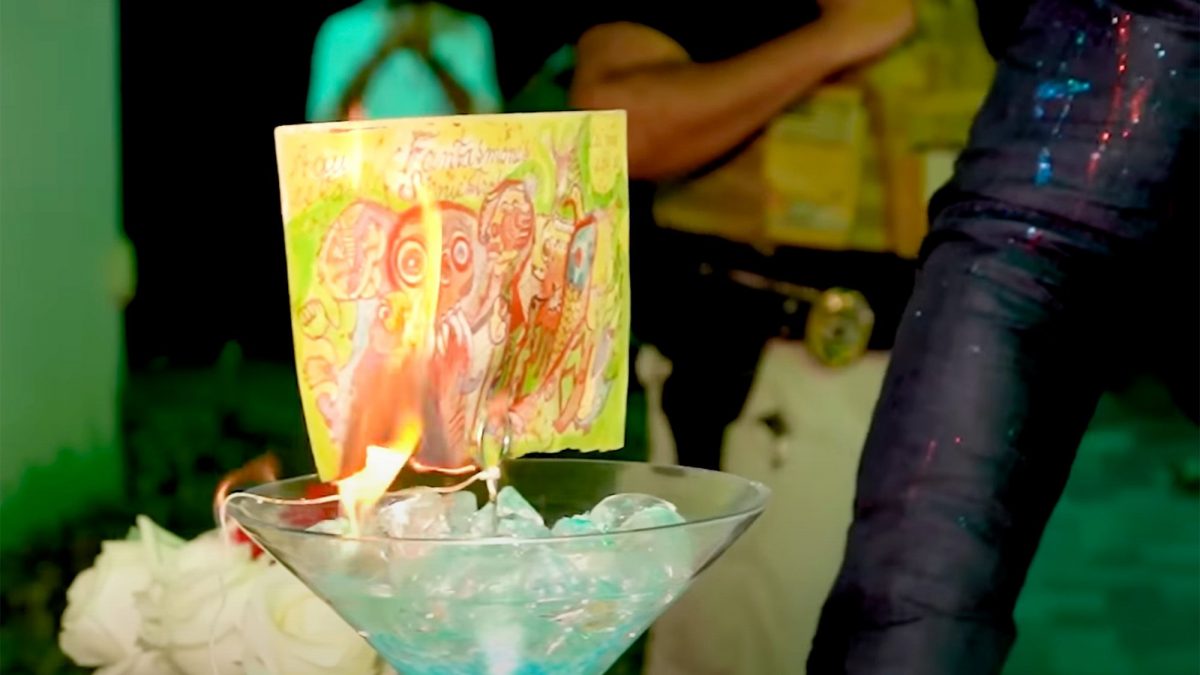 A Florida man who set aflame what appears to be a $10m Frida Kahlo drawing as part of an NFT (non-fungible token) launch is under investigation for federal crimes in Mexico.

Martin Mobarak, a Mexican technology entrepreneur and creator of the cryptocurrency AGCoin, filmed his incendiary stunt on 30 July during a private event at his Miami mansion, Mexico Daily Postreported. Guests were invited to the launch of an “exclusive NFT collection” produced by Mobarak’s project Frida.NFT, which is minting 10,000 digital versions of Fantasmones Siniestros, a drawing by Kahlo. Footage on YouTube, posted by Frida.NFT, shows Mobarak unveiling a work on paper that appears to be Fantasmones Siniestros (1944), unscrewing it from its frame, and setting it on a martini glass of dry ice and fuel. He lights it on fire as the crowd—described on his website as “a curated list of attendees”—cheers and a mariachi band breaks into song.

As documentation of the event circulated, it also caught the attention of Mexico’s National Institute of Fine Arts and Literature, the country’s leading cultural authority. The institute announced Monday that it is investigating the destruction on the grounds that Kahlo’s works are national treasures. “In Mexico, the deliberate destruction of an artistic monument constitutes a crime in terms of the federal law on archaeological, artistic and historical monuments and zones,” it said in a statement.

Mobarak has claimed that a portion of the sales from the NFTs, which are priced at 3 Ethereum (approximately $4,000 today), will benefit charities including the Museo Frida Kahlo and Palacio de Bellas Artes, both in Mexico City, and the Children’s Craniofacial Association. Frida.NFT describes itself as “a pioneering innovative blockchain technology reforming the charity industry to increase transparency, donation frequency and donor incentive”. NFT holders will receive a high-resolution image of the drawing and “access to luxurious amenities, unique experiences and exclusive events around the globe”, among other perks, the website states.

Fantasmones Siniestros (or “Sinister Ghosts”) was originally a double-sided drawing Kahlo made in her diary, and it depicts a throng of creatures in ink and watercolour. The artist presented it as a gift to the Venezuelan art critic Juan Röhl, and it eventually came into the position of New York-based gallery Mary-Anne Martin Fine Art. Martin sold the drawing in 2004 to the Vergel Foundation and then in 2013 to a private collector, according to Vice. (The work has been exhibited at least twice, in the 2010 Kahlo retrospective at the Gropius Bau and as part of the 2012–13 travelling exhibition Frida & Diego: Passion, Politics & Painting, co-organized by the Art Gallery of Ontario, the High Museum of Art and the Museo Dolores Olmedo in Mexico.)

Mobarak has said on his website that he purchased the work in 2015 from Martin. But the New York dealer told Vice that she did not sell him the drawing and has never heard of him before last week. “The whole thing is creepy,” she told the publication.

The National Institute of Fine Arts and Literature says it is currently gathering information to confirm whether the work destroyed was the original. Frida.NFT’s website asserts that it was, noting that the work was certified for authenticity by Mexican art dealer Andrés Siegel on the day of its burning, after which it was placed in the custody of security and guarded until the event. “The painting was permanently transitioned into the Metaverse on July 30th, 2022,” reads the website.In an interview with Exeleon Magazine, Mobarak, who grew up in Mexico City, said he has a lifelong appreciation for Kahlo, whose museum he visited several times as a student. He also hinted that this was the first of several NFT collections to come based on artworks from his own collection. “As the current owner of the paintings, I have a vision of creating perpetual donations to multiple organisations for the needy with royalties from the NFT sale and collection,” he says.

Mobarak isn’t the only wealthy person investigating the combustible intersection of physical art, NFTs and fire. Damien Hirst plans to burn a number of his works next month in London as part of a project in which collectors had to choose between retaining ownership of physical objects or receiving NFTs instead.