A brush with… William Kentridge 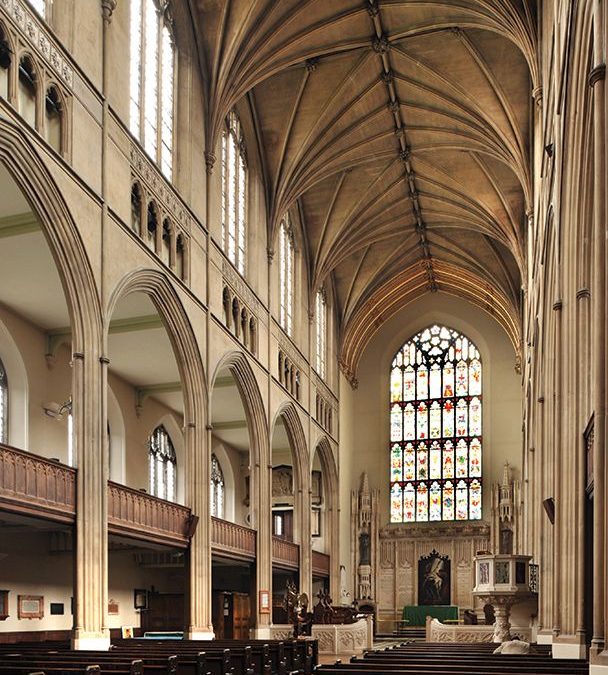 Early to mid-Georgian churches by the likes of James Gibbs and Nicholas Hawksmoor have long been admired, and over recent decades Victorian ones have also come into their own. In contrast the late Georgian buildings covered by this important book have not had a good press since they were dismissed by the Ecclesiologists—the Cambridge Camden Society was founded in 1839 and its journal The Ecclesiologist published from 1841—as mere “preaching boxes”, designed by architects with an inadequate understanding of the proper arrangement and style required for a “real” church.

In 1818 the Church Building Commission was set up, and the many churches erected with the aid of its grants have been dealt with in a fine book by M. H. Port (Six Hundred New Churches, 2006). However Christopher Webster, a research associate at the University of York, shows that both before and after this date a remarkable number of new churches were built, usually without grant aid. Webster aims to reclaim these churches by careful and knowledgeable analysis of their origins and meaning. He uses an immense quantity of information, and a remarkably generous number of illustrations, including a considerable selection of photographs by the late Geoff Brandwood.

His lack of sympathy for the Ecclesiologists, and for Augustus Welby Northmore Pugin, who are generally regarded as the apostles of “correct” Gothic, suggests an Evangelical point of view, which is hostile to Roman Catholicism and which puts auditory worship above sacramental worship. This is a perfectly respectable perspective, though one which is hardly fashionable. Webster is, however, full of praise for Robert Chantrell’s Leeds Parish Church (1837-41), which has a chancel equal in length to the nave, with a well-raised altar and choir stalls in front of it. He rightly describes it as a “precursor of Ecclesiology”.

Webster shows that church building in his period was in response to the frequently emphasised lack of church space relative to the enormous population increases in England, mainly of course in towns. The problem was exacerbated by the lack of free seating in churches—pew rents were considered a vital source of income.

The choice of style was a crucial issue. Some argued that Gothic was cheaper than classical, though others disagreed. Certainly some of the classical churches were astonishingly expensive—for example, the privately funded St Pancras Church (William and Henry William Inwood, 1819-22) and St Marylebone Church (Thomas Hardwick, 1813-17) in London each cost around £80,000. The Gothic examples were too often clumsy and ignorant, though Webster makes a strenuous defence of the better ones, such as St Luke, Chelsea (James Savage, 1820-24) and St Thomas, Dudley (William Brooks, 1814-18), and shows a charitable sympathy towards the less good, such as the Lincolnshire Fen churches of Jeptha Pacey.

He devotes a generous proportion of his coverage to the north of England. For example, one case study deals with south-east Lancashire, where an energetic group of clergy worked to deal with the conspicuous lack of church room, often with commendable architectural results, such as St Peter, Ashton-under-Lyne (Francis Goodwin, 1821-24) and Holy Trinity, Bolton (Philip Hardwick, 1823-26). Throughout, Webster pays particular attention to the planning of churches, with a surprising number of unexpected and even eccentric plans illustrated. These include the oval St Martin Outwich, London (Samuel Pepys Cockerell, 1796-98) and the octagonal St James, Teignmouth (W. E. Rolfe, 1817-21).

Anyone with an interest in church architecture will find much that is unfamiliar and fascinating here, presented in readable prose and shown in excellent illustrations. It is to be hoped that the book will lead to a deeper appreciation of these buildings at a time when so many are under threat from insensitive reordering, or even closure, conversion or demolition.

• Peter Howell was chairman of the Victorian Society from 1987 to 1993. His latest book is The Triumphal Arch (Unicorn Publishing, 2021)