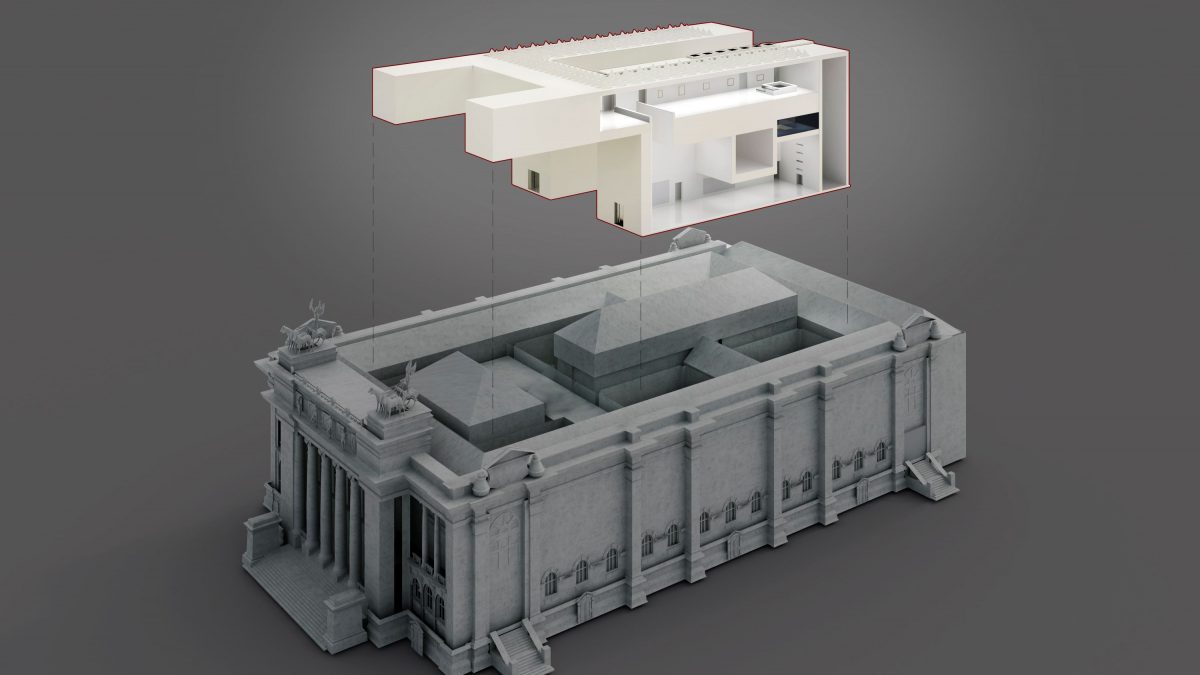 The Royal Museum of Fine Arts Antwerp (KMSKA) has opened its doors for the first time in 11 years following a transformative restoration costing more than €100m.

The original building was conceived by its 19th-century architects Jean-Jacques Winders and Frans Van Dyck as a “daylight museum”, where “visitors would enjoy a promenade surrounded by stunning artworks as well as the external landscape, witnessed through its multiple lookouts over the city and the inner patios”, according to the website of Netherlands-based architects KAAN Architecten, which was chosen for the redesign. Today, it appears unchanged from the outside. But an entirely new building has been inserted within the existing footprint. Twenty-first century white cube galleries have been incorporated into the original structure, increasing the exhibition space by 40%.

The project began in 2003, when the museum’s Neoclassical architecture was in such disrepair that demolition was an option. The Flemish government’s Department of Culture, Youth and Media issued a call for tenders. “The building really needed a total makeover,” said Carmen Willems, the director of KMSKA. “There were two important things to address. Firstly, there was not enough space to show the collections in a good way. Secondly, it has always been a tough job to maintain good climate conditions in the museum.”

From its holdings of 8,400 objects, more than 600 are now on display, with the increased wall space allowing greater visibility for previously under-represented parts of the collection, notably the world’s largest collection of paintings and works on paper by the Belgian Expressionist painter James Ensor.

KMSKA is best known for its Old Master paintings, and works by Peter Paul Rubens, Jan van Eyck, Hans Memling and Jean Fouquet are now housed in the restored galleries. Works dating from after 1880 occupy the new building, but design features such as a pivoting dividing wall and doors concealed in walls allow curators a renewed flexibility.

Daylight remains crucial to the design, says Dikkie Scipio, a co-founder of KAAN Architecten. Admitted and diffused via four lightwells, light is used to unify the old and new parts of the museum. She envisages the new building will act as an inspiration for its in-house curators: “Even during the hang, they started to adapt it and embrace it and feel at home in the building,” she says.

During its closure, KMSKA carried out extensive conservation work and loaned art to other institutions in Antwerp and beyond. But, in marked contrast to many other similarly high-profile collections, the museum only launched its collection online last year.

Carmen Willems says that, since her appointment as director in 2017, the building has been updated to keep with modern times. A second, more accessible entrance has been added in a bid to reduce queues. Office space has been turned into a new café and workshop space for children. “When you buy a new car, it’s old as soon as you’ve driven your first kilometre,” Willems says. “It’s the same with a building, because society evolves and the needs of the public change.”

But perhaps the most important concession is the retention of the museum itself. A debate was had over whether a new building should be created from entirely scratch. But the demands of sustainability meant keeping and adapting the original building. “I’m very in favour of making architecture that is strong, and adaptable, that people want to keep and hold on to for many years,” Scipio says. “People should really love the building—that’s my aim.”

But doubt was cast on the museum’s future role during the restoration process: earlier this summer, the Flemish government’s Department of Culture, Youth and Media announced that it wished to explore the possibility of a merger between KMSKA, the Museum of Contemporary Art Antwerp (MUHKA), and Mu.Zee, the institution in the coastal Belgium city of Ostend dedicated to Modern and contemporary art.

An open letter expressing concern about the plan was sent to Minister-President Jan Jambon earlier this month, with signatories including Belgian artist Luc Tuymans and gallerists including Adriaan Raemdonck, the president of BUP, which is the Belgian association of galleries for modern and contemporary art. Raemdonck said: “The sector is afraid. The situation is good in Belgium at the moment—we have a lot of very good artists, collectors and galleries. But we want to warn the minister to please take care. Let’s talk together. But don’t risk breaking things. It’s very dangerous and not good for the future.”

Plans for a new building for MUKHA are on hold, but any suggestion that the government has already spent its budget on KMSKA have been rebuffed. In its press statement, KMSKA said: “In the international context, €100m is a very modest budget. The renovation of the Rijksmuseum cost €375m.”