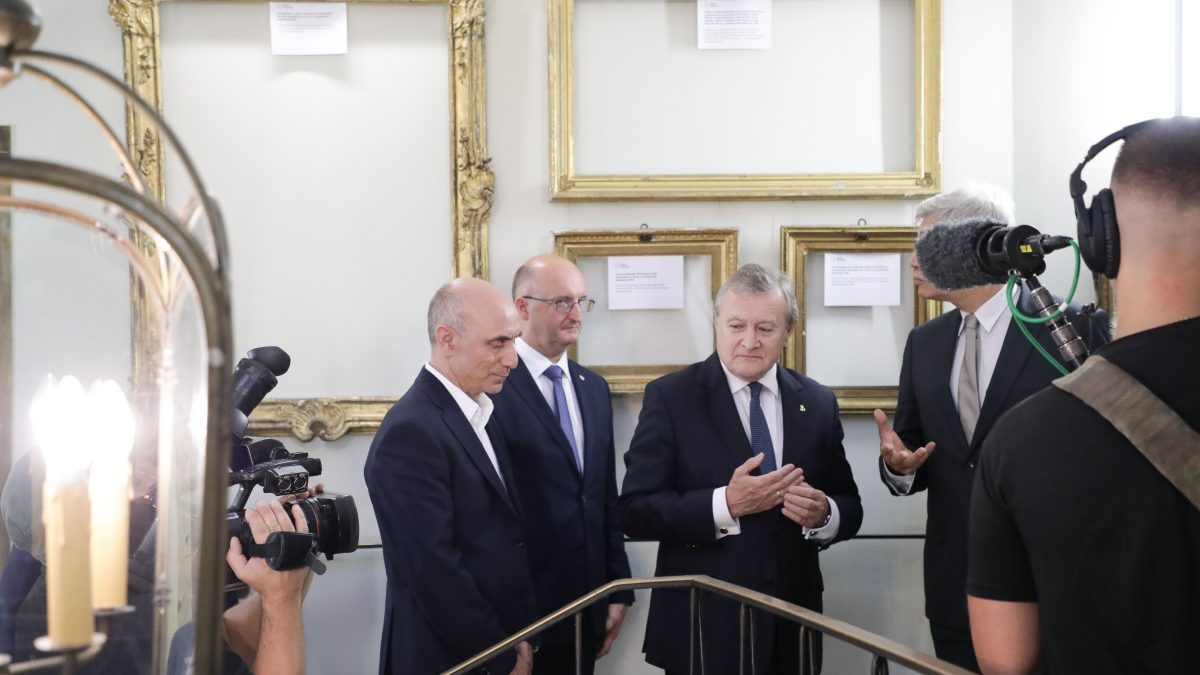 Poland is demanding that Russia return seven paintings that it says were seized from its museums and palaces during the Second World War by Soviet forces and can now be traced to the Pushkin State Museum of Fine Arts in Moscow.

Piotr Glinski, Poland’s Minister Culture and National Heritage, announced last week that the state had submitted a formal restitution request to Russian officials. He was speaking at a conference launching a project called “Empty Frames” where, as the name suggests, the state and 12 partnering Polish museums are presenting empty picture frames of lost works alongside labels describing them. These “remind us of works of art and historic buildings looted during the Second World War—both by the Germans and by the Soviets,” according to the ministry’s website.

The works listed by Poland’s Ministry of Culture and National Heritage include Adoration of the Child by Lorenzo di Credi (1510-20), “lost from the pre-war collection of the Poznań Society of Friends of Sciences”; and Portrait of the Painter from the circle of Valentin de Boulogne (around 1750-1800), “lost from the pre-war collection of the Silesian Museum of Fine Arts in Wrocław”. The ministry has detailed online database of Poland’s “lost works”.

It has been estimated that over 516,000 works of art from Poland were stolen or damaged during the war, not least due to systematic looting by the Nazis and Soviet Red Army “trophy brigades”. This month marks the anniversary of the Soviet Union’s attack on Poland and Nazi Germany’s invasion in September 1939.

Anna Turowska, a spokesperson for the ministry, told The Art Newspaper in an email that the paintings had been tracked down by the ministry’s Department for Restitution of Cultural Goods. “All seven paintings were recognised in the catalogue Italian Paintings of the 14th–18th Centuries by Victoria Markova, from the Pushkin museum,” said Turowska. “Browsing through both the catalogues and the digitised collections of museums all over the world is an essential task” of the department, she adds. Markova is the Pushkin museum’s chief specialist on Italian art; the museum did not respond to a request for comment by the time of publication.

Putin’s international cultural envoy, Mikhail Shvydkoy, says that there are no legal grounds for Russia to consider Poland’s request. “In the current conditions of unprecedented sanctions against the Russian Federation, the ‘cancellation’ of Russian culture in Europe, I consider the presentation of such claims by European states to be immoral,” he told the official Tass news agency.

A Russian culture ministry spokesperson said that the “kinds of valuables” claimed by Poland belong “to a special category, as they were transported to the territory of the Soviet Union as restitution to compensate for the actions of Nazi Germany and its allies during the Great Patriotic War,” the Interfax news agency reported.

Glinski says that since 2004 Poland has submitted 20 restitution claims to Russia for thousands of objects, including works by Pieter Bruegel the Elder and Lucas Cranach the Elder, with no result. Many works first seized by German forces were subsequently taken by the Soviet Union, but can be difficult to trace due to “lack of access to Russian museum resources and archival sources, including export lists”, Glinski said at the press conference. The Soviet Union returned over 27,000 objects, books and archives to Poland when it was under Soviet control in 1956, but only one painting after the collapse of the USSR.

Poland will keep pursuing restitution, Glinski says. “Cases of the plunder of cultural goods do not expire—not only in the ethical and moral dimension, but also in the sphere of international law.”