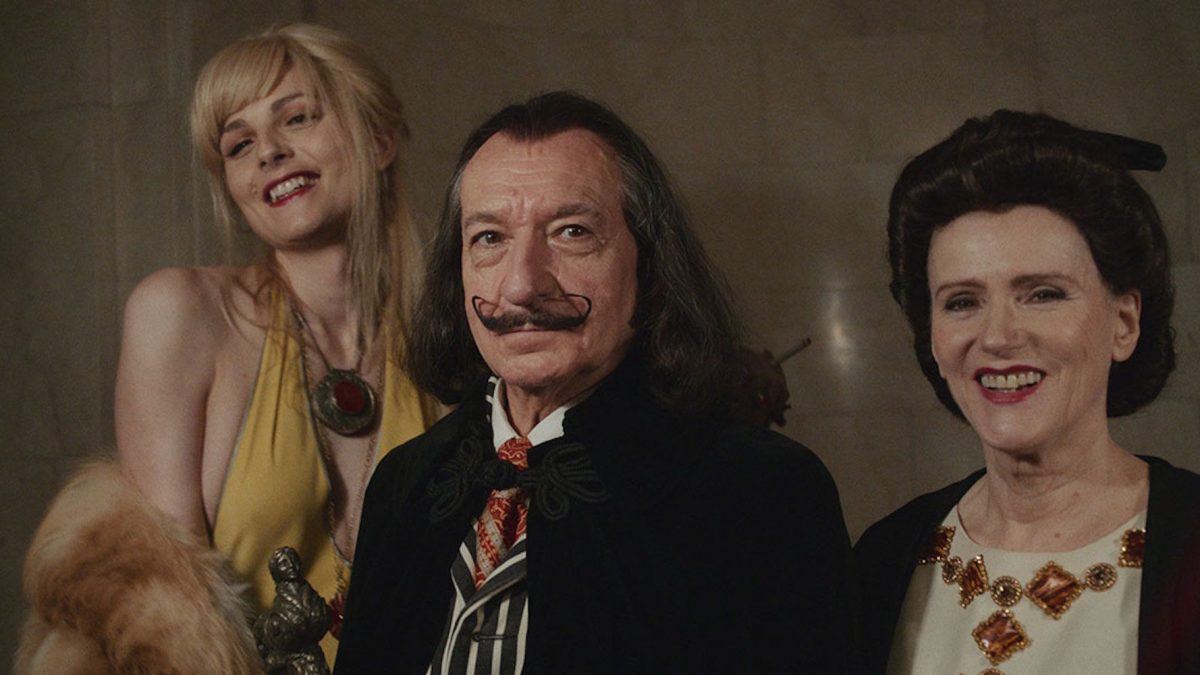 The young Salvador Dalí sits alone at his kitchen table, awaiting inspiration. It is night. All is silence, and the great man is still. The air is warm. Casting his eyes to a half-eaten wheel of brie, he observes that the cheese, already soft, has begun to melt. The ticking of the clock is the only sound. Eureka! Later in the evening, he invites his wife Gala to behold his breakthrough. She sits before his easel and begins to weep in wonder. We experience the revelation of The Persistence of Memory (1931) vicariously through her, for she faces the camera, and the painting faces away from it, as the makers of the film Dalíland were unable to afford to license any of Dalí’s art.

The benighted Dalíland, which, except for a few flashbacks such as the foregoing, stars Sir Ben Kinglsey as Dalí during his Studio 54 years, is not without pedigree or on-paper interest. The director, Mary Harron, has form for evoking the creative chaos, bohemian decadence and palace intrigue surrounding a notorious and egomaniacal artistic genius, having made her feature debut with the 1996 film I Shot Andy Warhol. But this film—which was made in a month with Liverpool and North Wales standing in for New York City and Spain—is under-resourced, and fatally compromised by that most tired of historical fiction tropes: the audience-surrogate protagonist, who enters wide-eyed into an artist’s inner circle, and listens attentively as someone whispers thumbnail bios into his ear whenever an important character enters a scene for the first time.

In the case of Dalíland, this is the fictional James, played by Christopher Briney, who works for Dalí’s New York gallerist and is sent to the artist’s rooms at the St. Regis to keep an eye on him in advance of his next show. A dull, pretty cipher, James is instantly nicknamed “Saint Sebastian” by Dalí, and welcomed into a wild world of single lines of cocaine and threesomes.

Dalí covers extravagant restaurant bills by doodling on the check, an increasingly necessary hustle as critical esteem for his art, beyond the thrall of his celebrity, wanes along with his physical vitality. Kingsley, playing a real-life ham prone to regency-dandy outfits and heavily accented third-person pronouncements, sometimes calls to mind David Suchet as Hercule Poirot, but generally his actorly exertions, alternately fey and guttural, harmonise with Dalí’s own vanity.

The director and her husband and screenwriter, John C. Walsh, are clearly curious about Dalí and Gala’s artistic marriage, and Gala’s ostentatious self-effacement into the role of muse, manager, nursemaid and taskmaster. Gala is played by Barbara Sukowa with a Russian accent and air of deluded aristocratic severity, capturing Gala’s terror of death and poverty.

Like Warhol, Dalí at this stage of his career is an art factory, signing blank papers for lithographs to be printed on later. Rupert Graves is Dalí’s agent Captain Peter Moore, who encouraged this dilution of the brand as well as the mass production of prints falsely marketed as lithographs. James, though, sees authenticity in Dalí’s ceaseless self-fashioning, and sheds the inhibitions of his conventional upbringing thanks to the artist’s Promethean dispatches from the deepest subconscious. Dalí “takes me inside his dreams”, James says rapturously—because the filmmakers can’t show the art that sparked this epiphany, the line comes off as unintentionally comic as well as completely generic.

Having James be nicknamed “Saint Sebastian—the patron saint of homoerotic art” is one way Harron and Walsh emphasise the queerness of Dalí’s milieu. His and Gala’s intense romance, non-monogamous and largely sexless but still marked by volatile need and jealousy, as well as his own predilection towards candaulism, suggest Surrealism’s anarchic rejection of normative hierarchies, sexual and otherwise.

Significant among Dalí and Gala’s retinue in Dalíland are the model Amanda Lear, Dalí’s disco muse, played by the transgender woman Andreja Pejic. Rumours and innuendo about Lear’s gender identity, and Dalí’s role in her purported transition, were the source of her mystique; in the press notes, Harron matter-of-factly describes the still-living Lear as trans, a status she has never publicly confirmed. The glam-adjacent rocker Alice Cooper, once you get past the makeup, seems like a difficult celebrity to imitate distinctively and entertainingly. The casting of the non-binary Ezra Miller as the young Dalí in a few brief flashbacks fits this theme, as well, though the choice has backfired for reasons outside of Harron’s control.

In any case, this feels like window dressing on a by-the-numbers biopic no one needed or will long remember; Dalíland’s use of multiple songs from the Velvet Goldmine soundtrack only serves to remind viewers of what a truly radical artist’s-life film feels like.