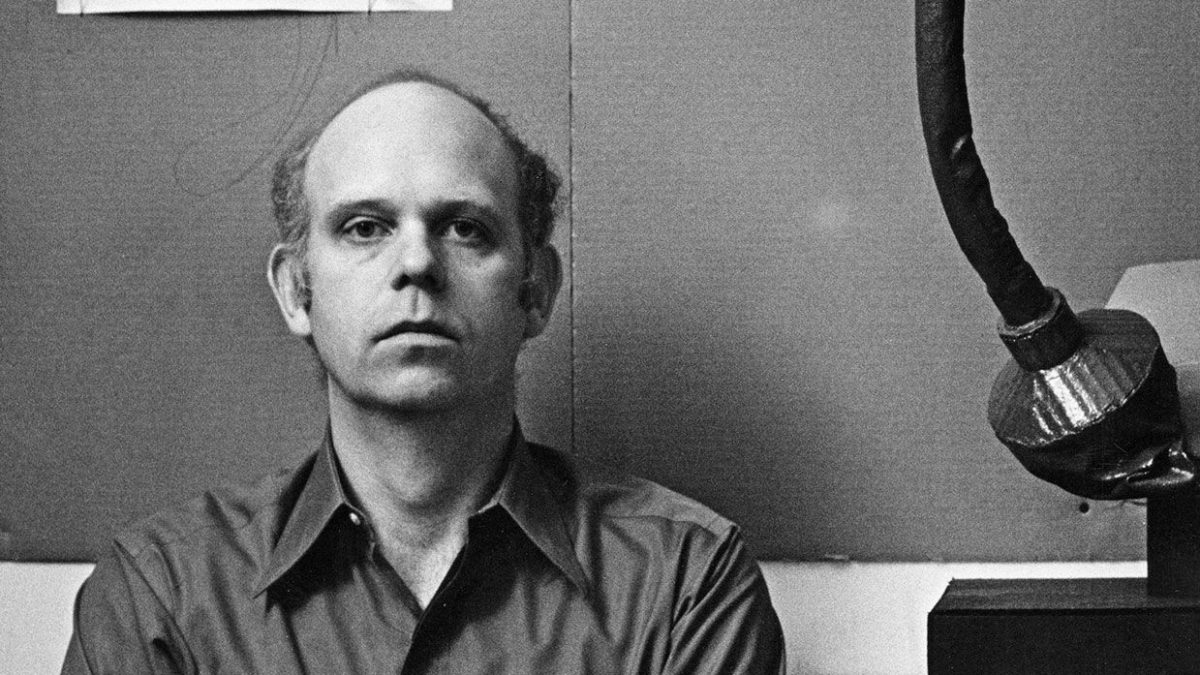 Claes Oldenburg defied the rules of Abstract Expressionism, making sculptures and sewn creations from materials found on the streets of New York. Eventually, he crafted ordinary objects on a grand public scale in the US and Europe but chafed when his colossal sculptures were called Pop Art as debates raged over whether they were monuments, municipal marketing or just monstrous.

Oldenburg died at 93 from complications after a fall, 13 years after the passing of Coosje van Bruggen, his wife and collaborator since 1977, who shared credit on their work together. Those sculptures conquered public spaces, but his early work was in the trenches, on the streets and in the shopfronts of Manhattan in the early 1960s, when artists clawed their way beyond abstraction. One project, from 1967, was an oblong hole that seemed to await a corpse in Central Park behind the Metropolitan Museum. Before then, he had opened The Store (1961-62) on the Lower East Side, which for a month sold versions of ordinary objects in plaster and paint that mocked an art market which ignored what he made. “Nothing is irrelevant,” Oldenburg wrote in a notebook entry. “Everything can be used.”

His goal at The Store “was to put colour into space, to make colour feel tangible,” he recalled. “It was intended to be a work of art, and not really a store.” Still, Alfred Barr, the director of MoMA, acquired 1962’s Two Cheeseburgers, with Everything (Dual Hamburgers) in plaster and paint.

Art “happenings”, which Oldenburg organised with Allan Kaprow, Red Grooms, Lucas Samaras and others, were free-form gatherings (not yet called performance art) where participants wore the art, usually sewn by Oldenburg’s first wife, Patty Mucha. His soft sculptures, which she created out of fabric, questioned the durability of art. A soft bathroom in vinyl, with its Soft Toilet (1966), seemed designed to shock or cause disgust, or both.

But it wasn’t Pop Art, Oldenburg stressed. “The thinking around it and the emotions go beyond that. It wasn’t an attempt to make comments on consumerism or capitalism or whatever. It was an attempt to make art, to make form, out of the materials around us,” he said. Laconic, terse and trenchant, Oldenburg told the critic David Sylvester in 1965, in a wide-ranging interview, that “if you’re interested in form rather than in sculpture as some narrow idea of what sculpture can be, why shouldn’t there be soft form as well as hard?”

I think of sculpture in general as form and space or mass and space, and that allows me to include anything as sculpture—chairs as sculpture or bottles or bathtubs or anything

“There is another notion that’s not allowed in sculpture, that sculpture can be perishable or made of perishable materials,” he said. “I don’t know, this probably goes back to some religious concept of sculpture: it should last, it should endure and so on. But I think of sculpture in general as form and space or mass and space, and that allows me to include anything as sculpture—chairs as sculpture or bottles or bathtubs or anything.”

Objections to his soft sculpture, he told Sylvester, “must be some sort of sexual thing. Perhaps sculpture is involved with erections and so on. Sculpture has always had a kind of a masculine quality and painting has always been regarded as a softer art… all my pieces have been somewhere in between.”

Oldenburg often said that he became an artist because he could draw. Born in Stockholm in 1929, the son of a diplomat who became the Swedish consul in Chicago, Oldenburg saw himself as an American of Swedish origin. He had said that he was conceived in the US but his mother returned to Sweden for his birth. He attended Yale and the Art Institute of Chicago school, then lasted six months as a reporter in Chicago. “I could not see myself spending a lifetime writing meaningless reports about meaningless events,” he told MoMA in 1969.

After opening (and closing) The Store, Oldenburg worked on drawings that he called Proposed Colossal Monuments. His sketches of imagined grand sculptures were as ominous as they were whimsical—a giant ice cream bar to replace the Pan Am building, a massive teddy bear in Central Park that demarcated class boundaries and, in what he called “everyday crap” in three dimensions, a phallic-shaped deflated red drainpipe in Toronto.

A turning point was Lipstick (Ascending) on Caterpillar Tracks (1969), a giant tube of make-up on a tank-like chassis. Students who knew Oldenburg’s “colossal monument” drawings asked the philosopher Herbert Marcuse, visiting Yale, what might happen if structures like it—mocking and feminising a military vehicle during the Vietnam War—were actually built. As Oldenburg recalled, Marcuse said that might mean the end of capitalist society.

Eager for that outcome, the students commissioned a real version of Lipstick and sneaked the finished work into the campus, setting it up on Beinecke Plaza. Oldenburg, who built it for free, said that Yale officials, fearing something worse, allowed Lipstick to stay, although it was later removed, remade with more durable materials and relocated to another site at Yale, where it still stands today.

A parade of gargantuan works followed—from an ice cream, Dropped Cone, in Cologne to the 45-foot black steel Clothespin in Philadelphia, two adjoined sticklike shapes that Oldenburg said echoed Constantin Brancusi’s The Kiss. Sculptures of black mice that he made in Los Angeles in the 1960s led to Disney comparisons—yet Oldenburg’s scale and light-hearted juxta­positions of elements suggest the imagination of a surrealist Dr Seuss.

If Oldenburg sought a broader public with that massive scale, it didn’t work overnight. In Cleveland, Ohio, a colossal rubber stamp, Free Stamp (1985), first commissioned by the Amoco petroleum company, was rejected by British Petroleum, which acquired Amoco while Oldenburg was building the work. Eventually, local government put it in a park. In Miami, a massive fruit bowl split into multiple parts, Dropped Bowl with Scattered Slices and Peels, was condemned in 1990 as a hazard. And in Kansas City, where Oldenburg and van Bruggen produced giant shuttlecocks on a lawn at the Nelson-Atkins Museum in 1994, a columnist in the Kansas City Star called them inappropriate, even though the newspaper’s own art critic admired them.

The tradition in public sculpture is to create something hierarchical which is up on a pedestal. People are surprised when that tradition is turned on its head

“The tradition in public sculpture is to create something hierarchical which is up on a pedestal,” said Oldenburg in a 1992 NPR interview. “People are surprised when that tradition is turned on its head and instead you get a simple object that most people probably don’t feel belongs on a pedestal. But in modern times, such an object is more appropriate than, say, an equestrian statue.”

“Very often a public sculpture is used by people to promote their own causes. Politicians will use it to make a case which would call attention to themselves,” the artist noted.

“Coosje and I feel that somehow it wouldn’t be right to put up something that everybody would agree on, that we have a responsibility as artists to create something that has a bit of an edge, that lies a bit ahead of the general consciousness, so when that’s transferred into public art, it does make people surprised sometimes, though they do get used to it,” Oldenburg told NPR.

There were a number of critics who dismissed these works as edge-less marketing gambits for the cities that acquired them. Oldenburg had gone Pop and down-market, and bought a château in France, they said. In 1961, he had written, “I am for art that is put on and taken off like pants, which develops holes like socks, which is eaten like a piece of pie, or abandoned with great contempt like a piece of shit.” Some asked if this was the same artist.

Several years after van Bruggen’s death, Oldenburg returned to small-scale sculptures. His 2017 series Shelf Life was a set of 15 ensembles whose elements suggest his earlier work and are counterposed with 17th-century Dutch paintings. The entire valedictory show at Pace Gallery, New York, was acquired by the Museum of Fine Arts (MFA) Boston. The MFA’s director, Matthew Teitelbaum, said “I started to think about the notion of an older artist, late in life, thinking about achievement—reconciling, celebrating, raging against it. It made me think of Matisse’s cut-outs or Rembrandt’s last great self-portraits.”

Asked in 2017 which artists he admired, Oldenburg cited René Magritte for his 1929 painting The Treachery of Images (Ceci n’est pas une pipe), a frank differentiation between an object and the depiction of an object. “The art is made as art – we’re making form, we’re making ideas, we’re making feelings. The art may refer to many other things, but the art is in itself the creation,” Oldenburg stressed. “Even though we call it a hamburger, it’s not a hamburger.”