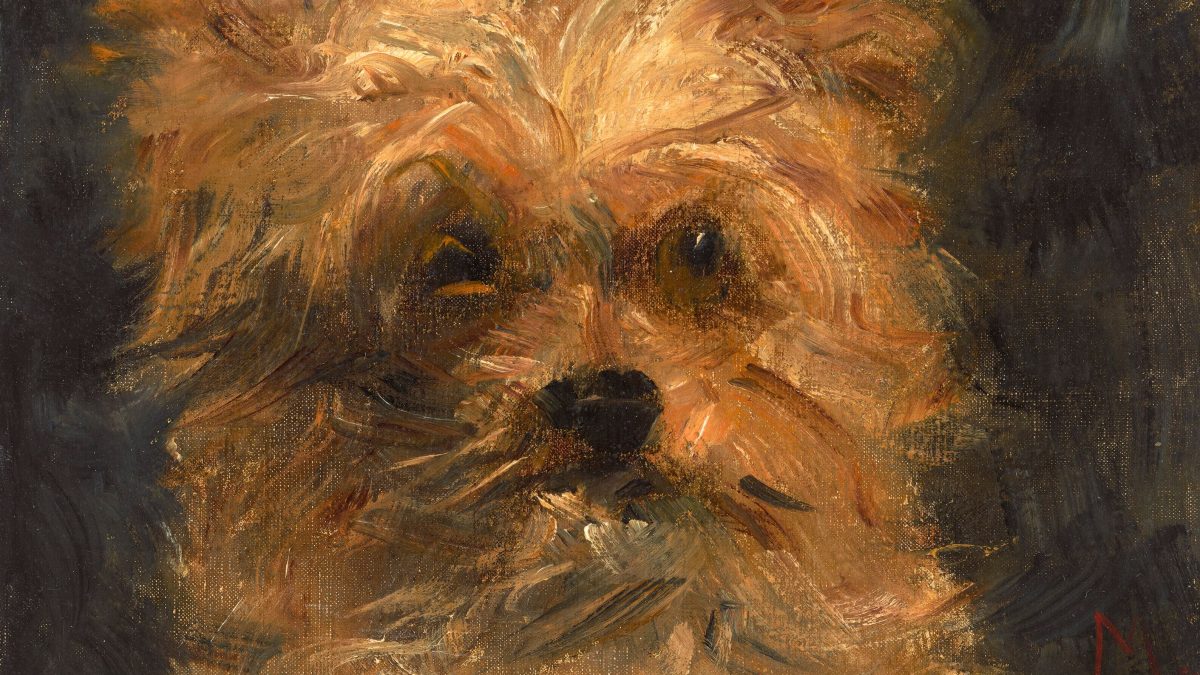 In October, the first movement of the Ann and Gordon Getty collection auctions at Christie’s in New York will start with a bang. Or rather, a bark.

Édouard Manet’s most famous pictures, including Olympia (1863), The Luncheon on the Grass (1863) and A Bar at the Folies-Bergère (1882), act as a window into Impressionistic views of life in and around Paris. His subjects often stare back at viewers, inviting them to join the scene or hinting that they may already be a part of it.

Tête du chien “Bob” (est $400,000-$600,000) has a similar power, though in this case, instead of joining the revelry of a naughty picnic or rowdy café, the viewer is inclined to reach down and give Bob the terrier a scratch behind the ears. Painted around 1876, the portrait of Bob the dog was commissioned by the opera singer and art collector Jean-Baptiste Faure. Faure owned an impressive 67 works by Manet (as well as works by his Impressionist comrades including Degas, Pissarro and Monet) and was arguably his most important patron.

Manet would, on occasion, make portraits of his friends, Faure included, and this picture is one of the few examples of that courtesy being extended to their pets. The brushstrokes attest to the swashbuckling Impressionist’s style of application, and Bob almost seems to be wagging his tail in expectation of a game of tug or a treat on the way. His name is painted in quick red brushstrokes on the top right of the small canvass, and towards the right is the artist’s signature, a red “M”.

These pet portraits are rare. There are only eight listed in the artist’s catalogue raisonné, two of which are in the upcoming Getty sale, Tête du chien “Bob” and Le chien “Donki” (1876, est $300,000-$500,000), which was owned by the printmaker Michel Manzi.

“Bob” has had a fraught path back to the market. The painting was once owned by Estella Katzenellenbogen, who shared an exceptional collection of Impressionist and Post-Impressionist works with her husband Ludwid Katzenellenbogen in Berlin before the Second World War. The two divorced in 1928 with Estella keeping a great deal of the collection, including “Bob”. However, the growing storm in 1930s Germany prompted Estella to flee the country, first to Switzerland in 1938 and two years later to the United States. (Around 1942 she was in California, running Karl Nierendorf’s International Art gallery in Hollywood, which she took over entirely in 1945.)

As was often the case during that era, many who fled Europe were either forced or coerced into parting ways with their art to pay for travel and more easily cross borders. According to the provenance for “Bob”, Katzenellenbogen owned the picture until around March 1945, after which it passed from gallery to owner to sale until, in 1982, it was purchased by the Gettys. The work is now up for sale following a settlement agreement between the Gettys and Katzenellenbogen’s heirs.

“Restitution is a complex, evolving field,” says Christie’s president Marc Porter, “and this painting is a wonderful example of that evolution and the nuances involved in the process.”

Restituting a work of art can often be a drawn-out, litigious procedure. For years only art that was physically confiscated or looted by government agents were eligible for restitution. Collectors who chose or were forced to sell their works to find safe haven did not have a claim on what was once theirs. That changed in 1998, when a conference hosted by the US Department of State led to the Washington Principles, which encouraged pre-war owners of art that was confiscated by Nazis or sold under duress to come forward and current owners to work with the heirs of those collectors to find a just, mutually agreed-upon way to return the work to its rightful owners without complicated lawsuits.

“The Gettys are part of the vanguard as far as settlements with families who were forced to sell works of art to live during the horror of the 1930s and 40s,” Porter says. “It’s a new kind of justice for those who lived during the Holocaust era. The painting has a wonderful karmic energy, and to be honest, it’s just utterly charming. You just want to bend down and give him a biscuit.”

The first sale of works from the collection of Ann and Gordon Getty takes place at Christie’s in New York on 20 October.