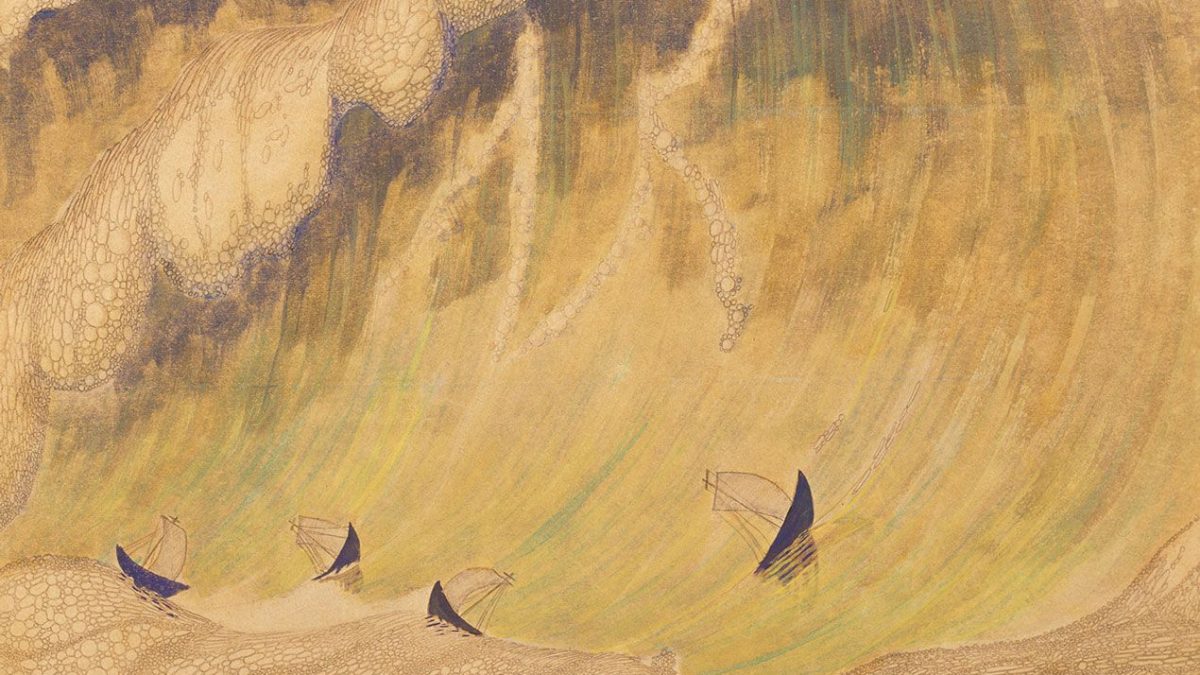 New discoveries are all part of the excitement in the build-up to a new exhibition. But in the case of Dulwich Picture Gallery’s new show, M.K. Čiurlionis: Between Worlds, the entire exhibition should be a revelation to audiences in the UK.

The composer and painter Mikalojus Konstantinas Čiurlionis (1875-1911) is a national hero in Lithuania, where almost his entire output of more than 300 paintings, drawings and sketches is housed in the M.K. Čiurlionis National Museum of Art in Kaunas. More than 100 of these works have been loaned to Dulwich Picture Gallery.

“These are works known to a very few people outside Lithuania,” says the curator, Kathleen Soriano, who also organised Harald Sohlberg: Painting Norway at the gallery in 2019. The Dulwich Picture Gallery is starting to gain a reputation for championing northern European artists, some of which may be unfamiliar to British audiences, with previous shows dedicated to the Norwegian painter Nikolai Astrup and the Finnish illustrator Tove Jansson.

Though steeped in Lithuanian folklore and mythology, Čiurlionis’s visionary paintings in pastels and tempera engage with the resurgence of spirituality and the quest for a new creative language that was prevalent in fin-de-siècle Europe.

Shock of the new

His association with Symbolism and the influence of Japanese prints in his work have underpinned previous exhibitions in Paris and Tokyo, but Soriano says that it is time Čiurlionis was looked at on his own terms. “He’s an artist who really does deserve attention,” she says. “Čiurlionis was witness to a dramatically changing world, at a time when artists were struggling with the loss of religion, Darwinism, the arrival of electricity and radio, the shift from rural to urban life.”

Čiurlionis was a musical prodigy and began his creative career as a composer. His paintings, which were made in six intensely creative years between 1903 and 1909, evoke music in their titles, their lyrical intensity, and in aspects of their composition. His seven sonata cycles, including Sonata No. 5 (Sonata of the Sea), each follow the pattern of the musical form, while in Rustle of the Forest (1904) the fingers of a breeze strum trees like a harp. Čiurlionis “tried to use music systems in paintings, he tried to create rhythm as it is in music,” explains Daina Kamarauskienė, the director of the M.K. Čiurlionis National Museum.

His studies in Warsaw and Leipzig, and a period in St Petersburg, brought Čiurlionis within the orbit of the major intellectual and artistic circles of the time. Like many of his contemporaries, such as his fellow synaesthetic composer Alexander Scriabin, Čiurlionis was interested in the esoteric religion of theosophy, and the blurring of boundaries between painting and music.

Shyness and his commitment to Lithuania’s cultural revival set him apart, confining him to the fringes of these circles. Although he achieved only limited success in his short life he was influential nevertheless, feted by Igor Stravinsky and Kazimir Malevich, and later by the French avant-garde composer Olivier Messiaen.

In Winter (1907), one of several painting cycles featured in the exhibition, Čiurlionis retains a sense of narrative, even while figuration dissolves into abstraction. Wassily Kandinsky was certainly aware of Čiurlionis’s work, though claims that Čiurlionis had “beaten” Kandinsky to abstraction were later vigorously refuted by Kandinsky’s wife Nina.

For an artist who imagined “the whole world as a great symphony”, the representation of Čiurlionis’s music presents a key challenge to curators. It is one met in this exhibition by an audio guide and a programme of recitals in the gallery’s mausoleum. “Čiurlionis is a household name in Lithuania,” says the gallery’s director Jennifer Scott, and “this exhibition will reveal why.”