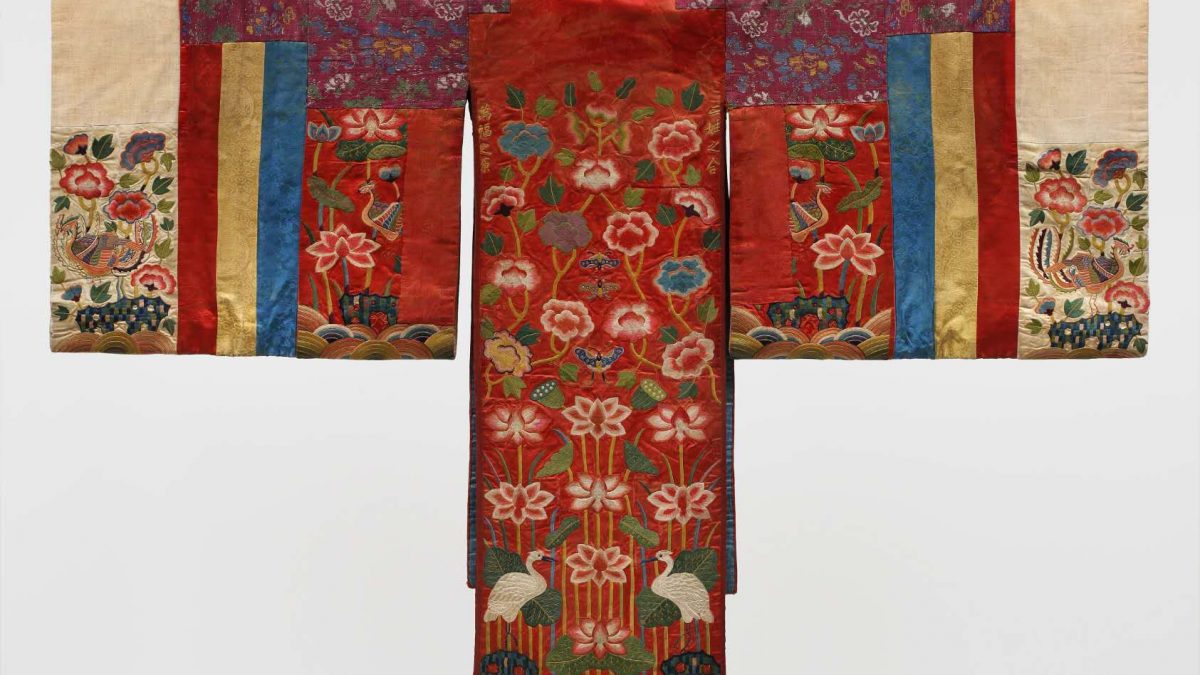 The Korean pop star and art patron RM has revealed that his 100m Korean won ($71,530) donation to the Overseas Korean Cultural Heritage Foundation (OKCHF), issued in September 2021, will be used to restore a royal hwarot robe from the Joseon Dynasty-era (1392-1910), which is held by the Los Angeles County Museum of Art (LACMA).

The bridal gown will return to South Korea this month for restoration under the guidance of the country’s Cultural Heritage Administration (CHA), which announced the plan today along with the musician’s plans for another 100m Korean won donation to OKCHF to support producing a catalogue of Korean painting masterpieces owned by overseas museums.

“For South Korea and the US, as the country of origin and the country of ownership, respectively, preserving and conserving our cultural heritage together is the core of this project,” a spokesperson for the CHA tells The Art Newspaper. “A team of our experts will preserve the original beauty of the hwarot by restoring it according to traditional methods. The project will also help raise awareness of this cultural heritage both at home and abroad.”

An agreement will be finalised upon the hwarot’s arrival in Korea and full inspection of its condition by CHA specialists, according to a press release. The restoration process is expected to take about five months, after which the robe will be put on public display at Korea’s National Palace Museum next year before being exhibited at LACMA in 2024. LACMA this week opened The Space Between: The Modern in Korean Art (until 19 February 2023), one of the first major overviews of modern Korean art in a Western institution. According to the musician’s Instagram, RM contributed commentary on his favourite works to the exhibition’s audio guide.

The Californian museum obtained the silk hwarot in 1939 through a donation by the collector of Eastern textiles Bella Mabury. The primarily red robe is embroidered with auspicious and longevity symbols like peonies, butterflies, and phrases such as: “Fortune is like the rivers and seas.” It is one of 40 such wedding garments of Korean princesses believed to exist; of those, ten are owned by institutions outside of Korea. Following the Joseon era, the hwarot style become widely adapted into vernacular wedding garments, and hwarots are the antecedent of the hanboks now used in Korean nuptials.

RM, an avid art collector whose legal name is Kim Nam-jun, has for several years been celebrating his 12 September birthday by making donations to support Korean arts infrastructure. In 2020 he donated 100m Korean won to the government-owned Museum of Modern and Contemporary Art (MMCA) for the reprinting of sold-out and out-of-print old catalogues and their distribution to public and school libraries. In 2019 he issued the same amount to fund music education at Seoul’s Samsung Deaf School.

This year’s donation will support a catalogue intended to be distributed internationally with the aim of promoting broad appreciation of Korean painting. The OKCHF will assign a team of experts to identify works to be included, and compile the catalogue in cooperation with the institutions that hold them. Since 2013, the OKCHF has conducted preservation work on 104 items of Korean origin owned by 20 institutions in eight countries prior to their public display.

“The foundation expects to prioritise paintings from the Goryeo-Joseon period (918-1910), as selected by Korean experts,” says a CHA spokesperson. Most of the relevant works have already been identified during prior research, and OKCHF will proceed with input from domestic Korean painting experts. The publication is set to be released in 2025, “but if discussions with foreign institutions can proceed faster, the timeframe will be accelerated”.