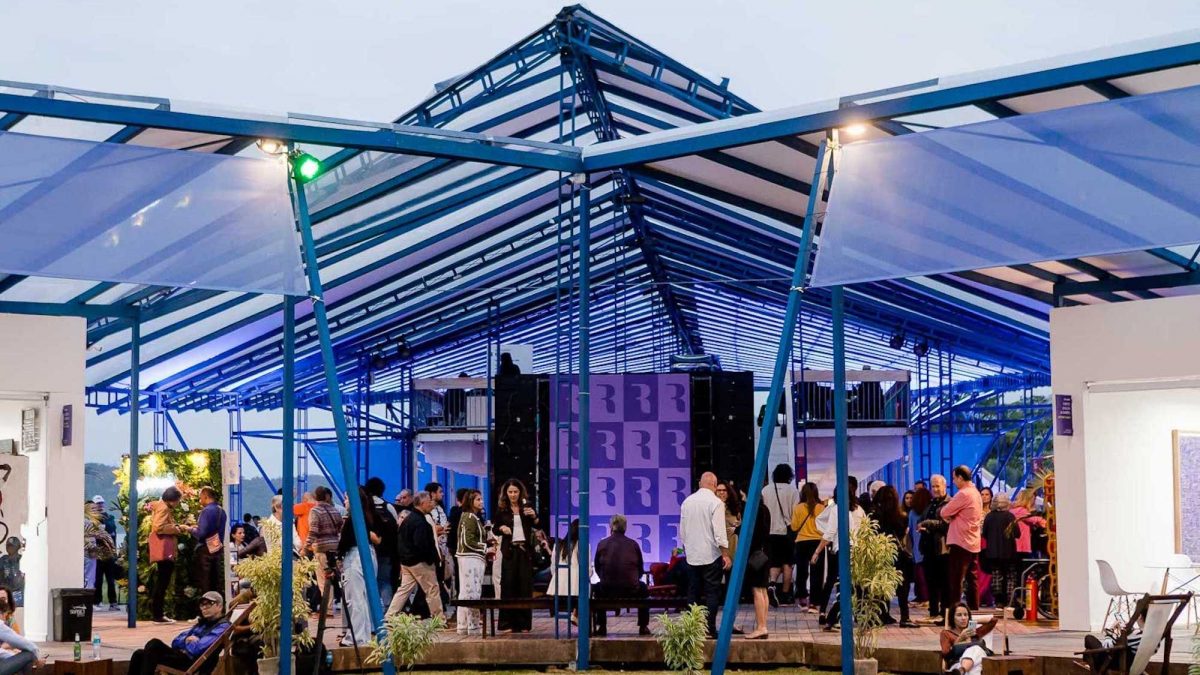 After two years relying on a hybrid model, Brazil’s ArtRio fair welcomed the public back for its 12th edition in Rio de Janeiro, which opened with a preview on Wednesday (14 September) and continues until 18 September. “After two years of pandemic, being able to do it in person and return to the normal world is excellent,” Brenda Valansi, ArtRio’s co-founder and president, tells TheArtNewspaper. “With the return of travel, we have the presence of many Brazilian collectors and also a group of more than 40 collectors from other countries,”

According to organisers, the number of galleries in this year’s edition is 20% higher than in 2021’s hybrid edition, with 62 galleries taking over indoor and outdoor areas at the city’s main marina for this week’s fair. Participating galleries are divided into two pavilions: Terra (Portuguese for “earth”), for more established galleries in the contemporary and Modern art market; and Mar (or “sea”), dedicated to newer galleries and solo stands.

“The Terra pavilion was set aside for the more established, ‘grounded’ galleries, like the earth itself, while the Mar pavilion, just like the sea, exhibits more mutable, younger and freer works,” explains Valansi.

São Paulo gallery Almeida & Dale is one of the outfits with a stand in the Terra pavilion, where it is showcasing 23 works by the Brazilian painter Antônio Bandeira (1922-1967). “Bandeira would have been 100 years old this year,” gallery partner and director Carlos Dale says. “To celebrate, we had a solo exhibition of his works in São Paulo and also wanted to exhibit his work here in Rio.”

Dale notes that Rio de Janeiro is a city with a tradition of collecting works of art from the 1950s, 60s and 70s, and Bandeira, whose work is priced between 1.5m-5m reais ($286,000-$956,000), is very well liked among the local collector base. “People here are used to following an artist like Bandeira and we are having a wonderful reception,” Dale says, adding, “I feel like we’re going to sell many of his paintings.”

One of the highlights of this year’s fair is the Solo Project, curated by collector Ademar Britto and shown in the Mar pavilion. Britto selected works by young artists from nine different galleries. The artists, each with their own stand, address issues ranging from social justice and racial inequality to the reality of life for marginalised groups living on the peripheries of Brazilian society.

Elian Almeida, represented by Nara Roesler gallery, is one of these young artists. “I feel a lot of responsibility sharing the space with other artists I admire from the same generation,” says Almeida, who showed his work at The Armory Show in New York last week. In Rio this week, he is showing works from the series O que nao se registra, o tempo leva,titled after a quotation by Mother Stella de Oxóssi,a priestess in the Brazilian Candomblé religion, that translates roughly to: “What isn’t registered, fades away with time.”

Almeida hopes this exhibition will help visitors fill in some of the gaps in Afro-Brazilian history. He adds, “In the past, Black people in Brazil had no right for self-representation and our identity and our history was erased.”

Almeida’s work seemed to be resonating with visitors to the fair’s preview. According to Nara Roesler, all of his paintings at ArtRio, priced between $13,000 and $17,000, were sold within the first few hours of the fair.

Periscópio, a gallery based in Belo Horizonte, is also taking part in the fair’s Solo Project sector, showcasing works by Brazilian multi-disciplinary artist Luana Vitra. “In addition to being an event with a commercial objective, it is also a way of introducing young artists to the market,” says Altivo Duarte, partner at Periscópio.

Vitra’s work is currently being exhibited in England and South Africa, but the gallery wanted her to be better known in her home country as well, says Duarte. “The pandemic created a void in the market, not only for events like this but for sales, and now I’m sensing that sales to private and institutional collectors are coming back with greater demand,” he says.

Since its first edition, in 2011, “ArtRio has remained faithful to its purpose of valuing Brazilian art and the production of the country’s artists”, says Valansi. “Brazil manages to be a country that has an artistic production that is so rich and so sophisticated that one can have an art fair just about Brazilian art.”

This summer, ArtRio was joined by another major fair focused on the national scene, when the country’s biggest fair, SP-Arte, launched Rotas Brasileiras last month. But, judging by the activity in the opening hours of ArtRio, the current collector demand seems capable of sustaining both.