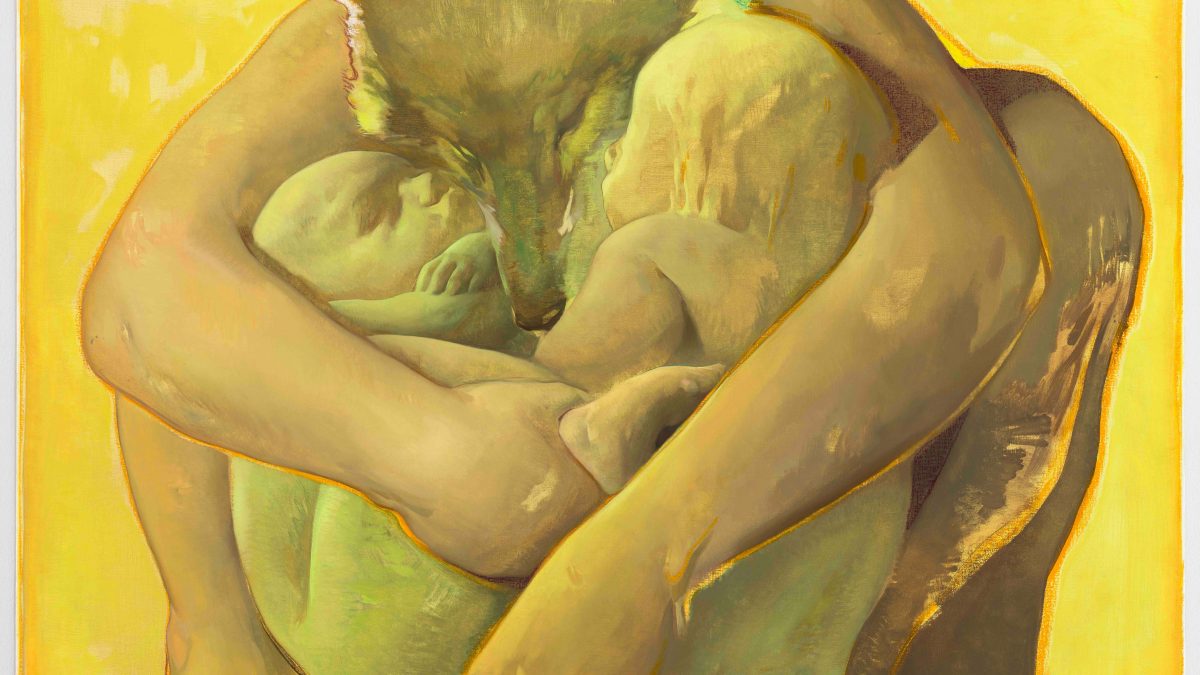 The 2022 edition of the curator-led Spring Break Art Show (until 12 September) features around 110 exhibitors who delve into themes loosely related to the “Neo-Renaissance”. The title Naked Lunch aims to “allude to works based on the body—works that are pursuing a rejection of the kinds of repression that propelled the artworks of the Renaissance, as people were coming out of the plague in the Medieval era”, the fair’s co-founder, Andrew Gori, told The Art Newspaper in a previous interview.

There are bookish, sociopolitical and art historical references throughout the fair, which returns to the former Ralph Lauren offices at 625 Madison Avenue for its tenth anniversary edition this year. Here we highlight some of most striking interpretations of the theme:

The American painter Colleen Barry is exhibiting a series of nine works that “engage with protection, motherhood and courage”, the artist says. There are three maternal paintings, two of which include the she-wolf, known as the “lupa” in Roman mythology. “The day I started painting Lupa (2022) the school shooting in Uvalde, Texas, happened,” she says. “These works took on a new meaning and significance to me about what it means to be a protector of the innocent and what that means politically in America. My maternal feelings and instincts are interwoven in both these canine representations.”

Additionally, the large-scale work Win Win (2022) depicts three life-sized female nudes clustered together in an abstracted landscape, alluding to the three graces or symbols of “feminine courage”, according to Barry. “Ideas surrounding the vestal virgins tending to Rome’s sacred fire came to mind while I painted these figures.”

The large-scale apothecary installation “acts as a platform for the discussion around the historical stigma and invisibility of women and non-binary people who experience menopause”, according to the curators. The space will be activated by a variety of artists, performers and community members throughout the run of the fair, creating an “inclusive and diverse space for people to share their own experiences and speak out on a variety of women’s health-related issues”. Inside the installation, visitors can explore a variety of fantastical paintings.

“The topic of menopause is so deeply important to talk about because it is something that affects everyone,” the curators say. “Yet it remains one of the least discussed and most stigmatised areas of healthcare and life transition. Healthcare that is gendered becomes healthcare that is impacted by discrimination and withholding of resources. In sharing experiences from the podium in the installation, in person and on social media, the project aims to aid in breaking down the isolation people feel, and hopefully getting medical professionals and legislators to step up to the plate and support people at this time in their lives.”

The Vermont-based Kishka Gallery presents a two-part show of works by Megan Bogonovich and Rebecca Morgan. The exhibition is “populated with ecstatic visual expression used to explore the world of intricacies constructed by the filter of human consciousness”, according to the gallerists Ben Finer and Bevan Dunbar. “It is a world comic and tragic, observant and interior, and one equally romantic and dystopian.”

Bogonovich’s botanical sculptures borrow from influences as varied as Roman frescoes and Dutch still-life paintings, operating like “a flood in reverse—first all at once, then slowly branching off into tributaries and trickles where their meaning is found”, according to Finer and Dunbar. Her sculptures find companions in the “humour and psychology” in Morgan’s work, which “exploits the lurid syrup of nostalgia to critique absurdity in contemporary culture”, the curators add. “Rather than rendering idealised beauty, Morgan mines what a culture says it wants and produces monsters of those desires. Delicate craftsmanship seduces a viewer while exploring the abject nature of seduction itself.”

According to Andrew Gori, Noah Kloster’s series of 100 Big Boy replicas “pulls from the exchange of sculpture and painting indigenous to the Renaissance, and updated for the Googie craze pregnant in post-war Americana, harkening to the idea of the ‘bodying’ of consumption that occurs with fast food mascots”.

Kloster adds: “Big Boy restaurants are dying off like an endangered species, so let’s bask in his glory one last time. Much Like Dorian Gray, Big Boy will never age. He will be a heavy satisfied young boy for the rest of his life. A piece of American culture frozen in time. He represents what America was and currently is. He is like the Statue of Liberty—instead of holding a torch, he is holding a burger. A burger that represents much more in today’s society.”

According to the curator, the presentation examines the “complex reality of human relationships with our own bodies, nakedness, visual representation and the ideas of acceptance, freedom and liberation from whatever is considered the norm in society at any given time and era”. It brings together work by four artists, including Petrovskaya, who explore human forms and nudity in both painting and sculpture.

Cydney Camp’s figurative pieces investigate the complexities of the contemporary Black psyche and experience in America; Luke Silva’s playful depictions of sculptures and ancient homoerotic artefacts cut through time and space; Horacio Quieroz brings complex portraits that emerge from organic shapes and blocks made of elaborately painted marble or porcelain-like skin; and Petrovskaya’s own sculptures reference the female figure and sexuality, influenced both by Antiquity and by contemporary pop culture with its bright neon colours.