A homecoming for Abstract Expressionist Grace Hartigan at The Armory Show 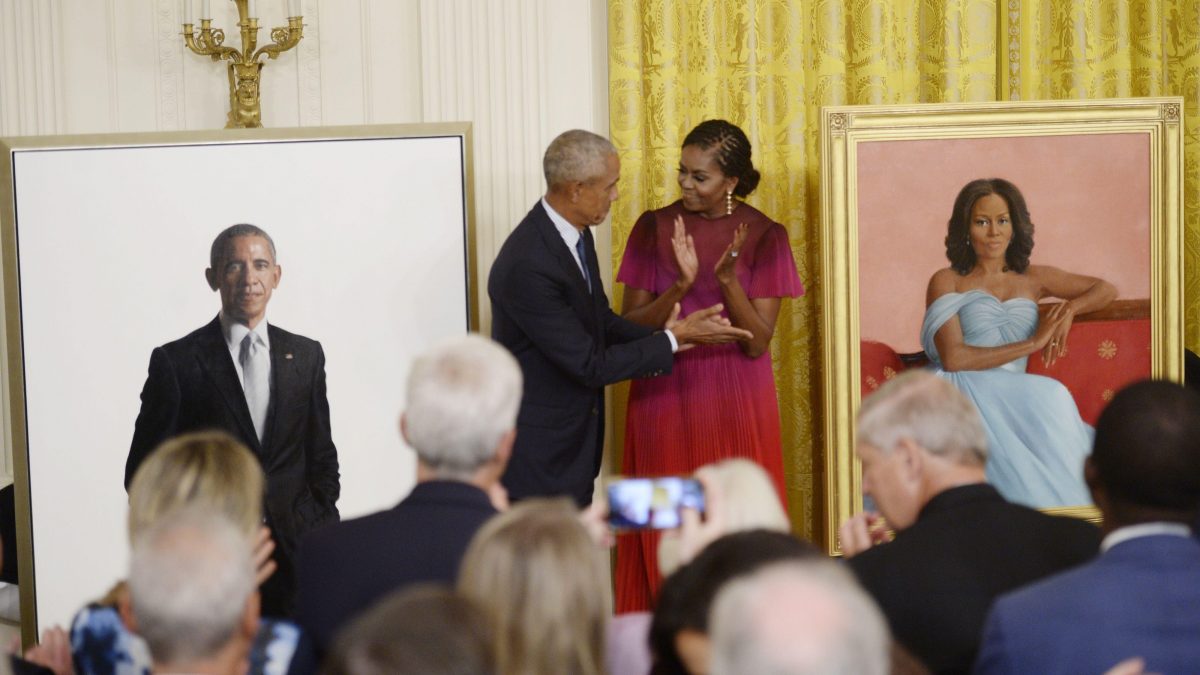 Nearly six years after they ceased to live at the White House, former president and first lady Barack and Michelle Obama were back at 1600 Pennsylvania Avenue today (7 September) for the unveiling of their White House portraits. Ordinarily the paintings would have debuted during the tenure of Obama’s successor, Donald Trump, but that did not occur. Instead, the works—and the identities of the artists—were kept secret for years and only made public today in an East Room ceremony presided over by the current president and first lady, Joseph and Jill Biden.

Barack Obama’s White House portrait, which depicts him standing against a stark white backdrop with strong lighting from one side casting a shadow over part of his face, was executed by Pennsylvania-born portrait painter Robert McCurdy. Michelle Obama’s portrait, in which she appears in seated on a red sofa against a backdrop of muted pink, was created by Brooklyn-based painter Sharon Sprung.

While McCurdy and Sprung’s portraits of the Obamas will remain on long-term display at the White House, the National Portrait Gallery’s (NPG) portraits of the pair—by Kehinde Wiley and Amy Sherald—are currently on a national tour and have just gone on view at the Museum of Fine Arts, Boston (until 30 October). While those paintings were paid for through private donations to the tune of $750,000—including from celebrity supporters like John Legend and Chrissy Teigen—funds for the White House portraits are provided privately by the White House Historical Association, which negotiates contracts and confidentiality agreements with the artists after the president and first lady select them.

“I want to thank Sharon Sprung for capturing everything I love about Michelle: her grace, her intelligence and the fact that she’s fine,” former president Obama said at the unveiling, according to The New York Times. “And I want to thank Robert McCurdy for taking on a much more difficult subject.”

Neither artist is a stranger to Washington, DC. Sprung was commissioned to paint a portrait of women’s rights activist and congresswoman Jeannette Rankin for the US House of Representatives in 2004, and earlier this year her portrait of the first woman of colour elected to the US Congress, Patsy Takemoto Mink, was unveiled by Nancy Pelosi, the speaker of the US House of Representatives. McCurdy, meanwhile, is well represented in the collection of the NPG, which includes his similarly stark and dramatically lit paintings of novelist Toni Morrison, boxer Muhammad Ali and astronaut Neil Armstrong.

Per White House tradition, the previous president’s portrait is unveiled during his successor’s first term, but it is unclear if the Bidens will host an unveiling ceremony for the Trumps’ White House portraits. That said, work has seemingly begun on Donald and Melania Trump’s NPG portraits: the former president’s Save America political action committee recently contributed $650,000 to the Smithsonian Institution, covering nearly the entire cost of commissioning the works.