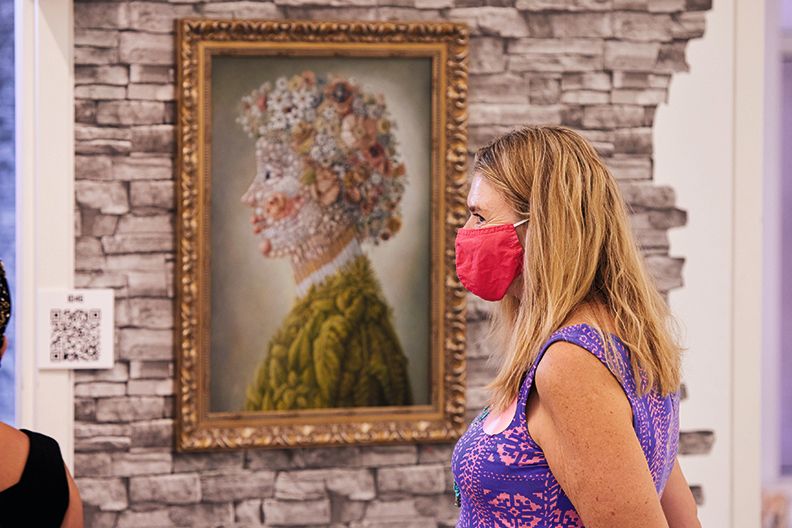 The 2022 edition of the Spring Break Art Show (7-12 September) marks the 11th anniversary of the curator-led fair. The event returns to the former Ralph Lauren offices at 625 Madison Avenue with the Burroughsian title Naked Lunch prompting bookish, sociopolitical and art historical references throughout the presentations from around 110 exhibitors.

“The title alludes to works based on the body—works that are pursuing a rejection of the kinds of repression that propelled the artworks of the Renaissance, as people were coming out of the plague in the Medieval era,” says the film-maker Andrew Gori, who founded the fair with his partner, the painter Ambre Kelly.

He adds, “There are many different starting points, from Michalengelo’s self-portraits to Manet’s controversial Le Déjeuner sur l’herbe (1863) to William Burroughs and the Beat Generation. And, of course, the impact of world-crippling plagues and humankind’s emergence from the Dark Ages is also relevant.”

The film-maker Sara Driver will present a series of around 100 sculptures by fellow director Noah Kloster that depict Big Boy, the face of the once-ubiquitous American burger chain of the same name. The project is a critique of “consumption”, Gori says, that fits the exhibition theme due to “the figuration of consumption represented by the character”.

The show also features a series of paintings by the artist Colleen Barry, curated by the actor Joanne Tucker. Barry’s paintings pay homage to Renaissance portraiture with some twists, such as bright splashes of neon underpainting. “She has an incredible technique that nods to the Old Masters and very explicitly aligns with the theme,” Gori says.

The presentation follows an exhibition devoted to Barry and her partner Will St. John in New York in March, which Tucker organised with her husband, the actor Adam Driver (no relation to Sara Driver). Tucker and Driver are also the co-founders of Arts in the Armed Forces, a nonprofit that aims to benefit veterans and communities interested in the arts.

Before Spring Break’s debut in 2012, Gori and Kelly launched its conceptual forebear in 2009 as a one-night show in a Lower Manhattan gymnasium. It existed in various formats in the following years before being formalised as Spring Break.

“We have no idea who came during those years because that was before we started keeping metrics and didn’t think it was something that we could necessarily sustain,” Gori says. “But we do know there were lines around the block, so at least people were receptive to it, and now here we are.”

Gori adds, “The idea for these events came to us around the 2008 recession, when we saw that artists were being pushed out of the system. Budgets were being slashed and everyone’s prosperity was being put into question. Reflecting on those times now, it’s like we’ve come full circle.”

Over the last three editions, the fair has welcomed on average around 20,000 visitors. After several successful editions in New York, Spring Break expanded to Los Angeles in 2019, where there have been three editions held concurrently with Frieze Los Angeles.