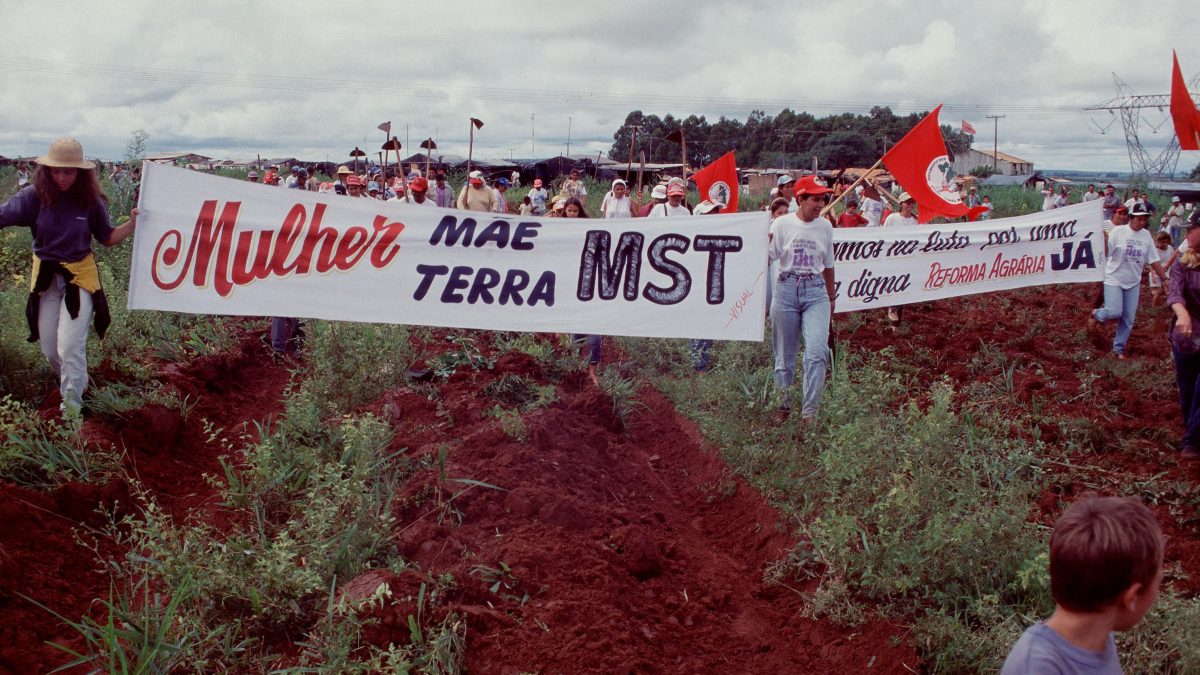 The Museu de Arte de São Paulo Assis Chateaubriand’s annual flagship exhibition centres on Brazilian art production over the last 200 years, featuring nearly 400 works that are organised into thematic groups exploring social and political facets of Brazilian life. But the exhibition roused controversy earlier this year when the museum was accused of censoring several photographs depicting a Marxist social movement known as the Movimento dos Trabalhadores Rurais Sem Terra (Landless Workers Movement, or MST)—a land reform group advocating for marginalised rural communities. The curators Sandra Benites and Clarissa Diniz withdrew from the project in the wake of the accusations, claiming that the photographs by the artists João Zinclar, André Vilaron and Edgar Kanaykõ were unjustly removed. The museum, which later reinstated the works and released several statements regarding the issue, denied the claims, stating that the photographs had been submitted after a deadline.

The Brazilian artist Maria Klabin presents a series of ethereal paintings in her first solo exhibition in New York. From Courbetian still lifes with fruits to the large-scale works Liquid Air (2020/2022) and Untitled (2021/2022—showing a sleeping figure in a hammock seemingly immersed by frenetic dreams and a moonlit embrace, respectively—Klabin’s work captures serene moments imbued with vibrating psychedelia, reminiscent of the molten watercolours made by Charles Burchfield that blur the ordinary with the otherwordly. In her own words, Klabin develops her work “as if writing a story, or a diary, but a diary of things that don’t really happen; it’s a narrative that could only be told through painting, but that touches themes that seem closer to writers than to painters”.

After a two-year hiatus, the biennial exhibition Panorama da Arte Brasileira, held by the Museu de Arte Moderna de São Paulo since 1969, returns with the title theme Sob as cinzas, brasa (Under the Ashes, Embers). The curatorial team, which includes the Brazilian curators Claudinei Roberto da Silva, Cristiana Tejo, Cauê Alves and the American curator Vanessa Davidson, assembled a multi-generational roster of 26 Brazilian artists and collectives presenting works that reflect on rebirth and resilience. The overarching theme of the “phoenix rising from the ashes” aims to “tap into the current moment in Brazil not just in terms of artistic production but also in terms of sociopolitical happenings and the rebirth of the country after the pandemic”, Davidson tells The Art Newspaper. The show includes eight new commissions, including a series of paintings by the São Paulo-based artist No Martins from the series Encontros Políticos (Political Encounters) (2022) that populate a main corridor of the museum and show Afro-Brazilians engaging in “postcard-like” activities that would typically depict white Brazilians; one shows a man wearing a jersey with the numbers 1888, the year that slavery was abolished in the country. The exhibition also utilises the exterior space of the museum for the first time, including several outdoor sculptures.

Until 20 November at the Casa Roberto Marinho, Rio de Janeiro

The significant influence that the work of Joan Miró and Alexander Calder had on Brazilian art as abstraction was popularised there from the 1950s onward is explored in this expansive exhibition of around 160 works by the artists that are juxtaposed with pieces by Brazilians like Hélio Oiticica and Abraham Palatnik. The Brazilian art critic Mário Pedrosa was one of the first to herald the artists’ work in Brazil, placing them in editions of the Bienal de São Paulo beginning in 1951. Among the highlights, the show includes the drawings for an unrealised project that Calder conceived with the architect Oscar Niemeyer, a 15-metre mobile that was envisioned to be installed in the Praça dos Três Poderes in Brasília. All the works in the exhibition come from public and private Brazilian collections, including the Museu de Arte de São Paulo Assis Chateaubriand and the temporarily closed Museu Nacional de Belas Artes in Rio de Janeiro.

Part of several exhibitions celebrating the centenary of the seminal arts festival Semana de Arte Moderna (Modern Art Week), this show juxtaposes Modernist works from the museum’s vast collection—including various from the collection of the late Gilberto Chateaubriand—with ceramics from the temporarily-closed Museu do Índio and contemporary artworks by Indigenous artists like Jaider Esbell. The unique pairing aims to explore the cultural syncretism of the country and the influence that Indigenous and African traditions had on pioneering Brazilian Modernists like Tarsila do Amaral and Candido Portinari. The title of the show references a Baniwa term that suggests a “gesture of return”, or “the moment when people who were targets of external actions understand the oppressive power of the other and look for possibilities to return to their own autonomy”, says the artist Denilson Baniwa, who organised the exhibition with the curator Beatriz Lemos.

Until 16 October at the New Museum, New York

The politics of gesture pervade the five sleekly-shot films in this exhibition by the Brazilian artists Bárbara Wagner and Benjamin de Burca. Whether an evangelical singer filling the Zona da Mata hills with echoes of her earth-shattering voice or dancers joyously swinging to the rhythms of frevo music, bodily acts capture the rituals and ideologies of the subjects’ communities. The works follow people from all walks of life engaging with the audience through different forms of performance. Works like Fala da Terra (2022) recount the brutal consequences of the workers’ protests against aggressive extractionism, mining and deforestation on their lands, while Swinguerra (2019)—a work created for the Brazilian Pavilion at the Venice Biennale that year—alludes to the predominantly queer dancers’ militant energy and ardor, as well as the fragility of power dynamics in dance contests held in the city of Recife. “We work with people whose bodies are heavily connected to a ritualistic experience and the community—through music or dance, their experience is associated [with] embodying joy as a form of resistance,” Wagner says.

Until 1 October at Pace Gallery, London

The Brazilian artist Marina Perez Simão brings much needed vibrance to London’s September skies in her first solo exhibition in the UK, where she presents a series of 18 Expressionist landscapes. Titled after the Portuguese word for “wave”, the works form a disparate exploration of water, land and light. With a deft handle of line and colour, Simão highlights the vast unknowability of the landscape she paints. Just when a viewer might believe they have spotted the beginning and end of a mountain or the traceable pattern of a body of water, the work can collapse into off-kilter vantage points without warning. In both an untitled diptych and quadriptych (both 2022) the viewer contends with unstable perspectives: are we looking at the landscape in full or do we look through panels barely camouflaging a seascape? The work has an experimental glee departing from some of Simão’s earlier creations, where composition is often simpler and horizon lines are no laughing matter. According to Simone Shields—the associate director of the gallery, who curated this exhibition alongside the artist and the Pace vice president Samanthe Rubell—Simão thinks of this show as “one of her more abstract to date”, where she is “thinking not just about her immediate surroundings or places she has lived and worked but about other worlds, other universes”.

Lívia Melzi: Tupi or Not Tupi

For her forthcoming show at the Palais de Tokyo, the Brazilian artist Lívia Melzi has photographed Tupinambá cloaks housed in European museums. The capes are made from thousands of feathers intricately tied together and were once used for rituals by Indigenous warrior tribes that lived along the Brazilian coast until Europeans arrived in the 15th and 16th centuries. Fewer than a dozen of the cloaks exist today and all are held in European collections, having been brought over in the 17th century. Melzi’s work explores how our understanding of these artefacts and the people who made them is shaped by the way museums display and contextualise the cloaks. Melzi often looks at the role of archives and museums and how they construct histories, particularly in relation to colonialism. The exhibition’s title is borrowed from Anthropophagic Manifesto (1928) by the Brazilian Modernist poet Oswald de Andrade, whose poetic text proposes that the appropriation—or “cannibalising”—of different cultures by Brazilian artists and writers is a a particular strength of the country. His phrase, “Tupi or not Tupi, that is the question”, draws attention to the Tupinambá, who were thought to eat human flesh, but also figuratively cannibalises one of Shakespeare’s most famous lines. Melzi’s photographs of European museum displays are a similar reappropriation of the appropriators.