Olafur Eliasson launches a virtual reality work and NFT commissioned by MetaKovan—the man who paid $69.3m for ‘that’ Beeple 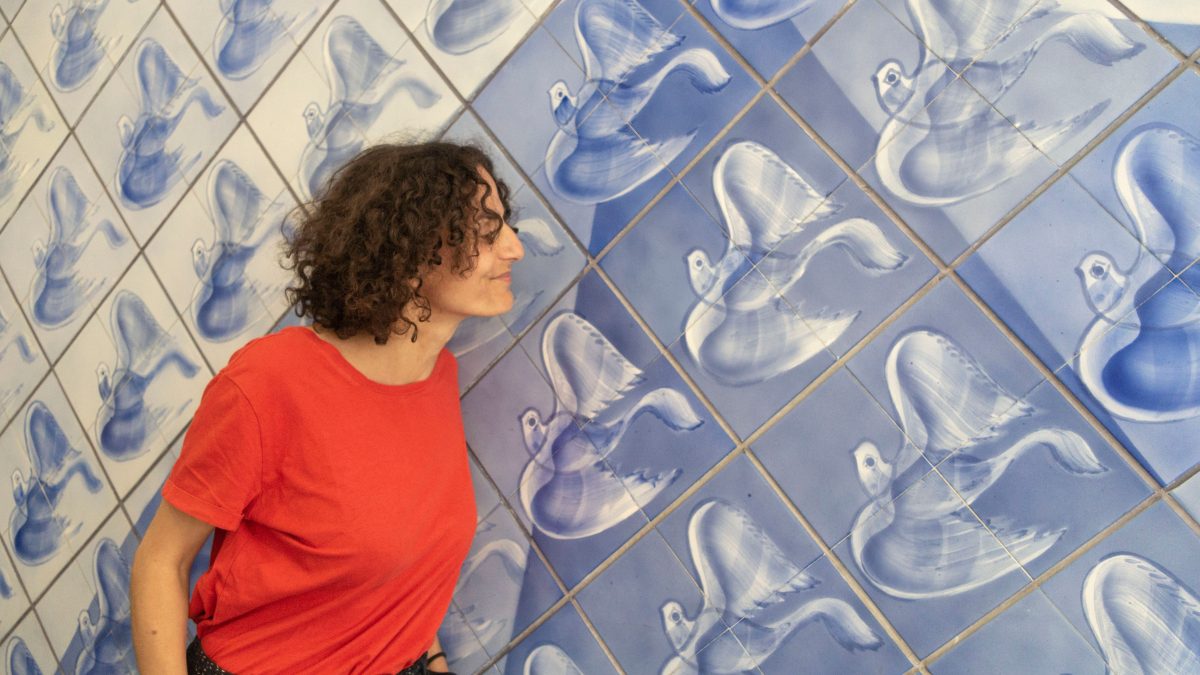 Shortly after attending his funeral, I desperately searched for a tiled panel that Ahmed Daoussi, my father, had shown me as a child. Not knowing the exact address, I paced around the Avenue Pierre Ier de Serbie in the 8th arrondissement in Paris and almost gave up before the mural stopped me in my tracks. The work, titled Pombas, the Portuguese word for “doves”, was by the celebrated Brazilian artist Candido Portinari, and I distinctly remembered the white and blue hues in the work that were reminiscent of our native Tunisia.

How did Brazilian doves land on a Parisian wall? My father had spoken to my sister about how proud he was to have worked under Portinari, but she and I only talked about Pombas after he died in December 2017. We should have been more curious while he was still with us. Information on Pombas is hard to come by and those with direct knowledge are long gone, so we set out to investigate this cosmic accident of how a 22-year-old Tunisian immigrant who was freshly trained in tile setting crossed paths with the great Brazilian artist.

Our first breakthrough was the discovery of three letters: one commissioning the work, another confirming the fee and a third clarifying the technical details of the “azulejos”, or glazed ceramic tiles, which comprise the work. Derived from the Arabic “al-zulayj”, these small polished stones were introduced to the Portuguese by way of Islamic civilisation in the 13th century and to Brazil by Portuguese colonisation in the 17th century. Brazilian architects and artists have since used azulejos to create a distinctly Brazilian identity—one that builds on the colonial past and makes the art their own.

Researching the genesis of the mural soon consumed our existence. As it turns out, Pombas was inspired by prophetic doves. During a trip to Brazil in the 1950s, a French businessman named Gaston Rueff discovered Portinari’s doves on a tiled panel depicting the life of Saint Francis of Assisi in the Pampulha Church in Belo Horizonte, an architectural project of Oscar Nimeyer that was completed in 1943. Rueff later commissioned Pombas to decorate a new building in Paris; the location of his archives, if they exist, remains a mystery.

A letter dated 1961 by the French architect Jacques Pilon, who was based in Brazil and facilitated communication between Rueff and Portinari, provided some answers about the tiles themselves. The typical 15cm by 15cm azulejos were made at a defunct tile factory in Recife, which became the ceramic studio of the late artist Francisco Brennand. Giandomenico De Marchis, an Italian sculptor who migrated to Brazil, painted Portinari’s designs onto the tiles in his São Paulo workshop that year. An estimated 38 boxes containing between 20 and 23 kilos of azulejos were then shipped to Paris.

Setting the tiles and ensuring colour and pattern alignment must have been extraordinarily complex. It takes four tiles set in a diamond shape to create each dove. Each bird looks unique, and the mural is a truly poetic and peaceful expression of doves in flight. A thick blue undulating line jumps at the viewer. Similar to his previous tiled panels, it seemed like a way for Portinari to unite the whole composition. Scholars have speculated that the line could be a reference to rocaille, or seashell-inspired lines, the hallmark of rococo designs that blossomed under France’s king Louis XV.

It is estimated that it would take one person working alone at least one month to set the estimated 1,680 tiles in Pombas. This coincides with the length of Portinari’s stay in France. Brazilian press clippings show he embarked for Le Havre on 4 October 1961, probably reaching Paris by the middle of October. He stayed, as usual, at the Hôtel Aiglon in the 14th arrondissement and left Paris on 27 November 1961. These fragments of information help us date the panel’s completion more precisely.

My father’s own archives were modest and didn’t provide any immediate answers to his connection to Pombas. He was trained in tile setting at a vocational training center set up by the French government. The French National Archives provided us with a copy of the training curriculum from 1960; with every page, we can picture how our father, over a period of six months, worked on acquiring skills to better his social condition. His trajectory is emblematic of the path traveled by thousands of immigrants at the time. In the throes of post-war reconstruction and labour shortages, and before they became the scapegoat of all societal woes to this day, France actively recruited manual labourers from its decolonising colonies until roughly 1974. His home in Bobigny was a dormitory for immigrants and was—literally and figuratively—miles away from the prestigious neighbourhood where he set the azulejos.

Our search for more details on Pombas started to reach what felt like a dead end. As a blue-collar worker, my father had never received recognition or accolades. We eventually met João Portinari, Candido’s only son, who had been living in Paris in 1961, but he lamented that he had not met my father or spent much time with his own father in Paris.

João also expressed that he wants to fix what he calls “the invisibility of Portinari”, which is the result of having 95% of his father’s work held in private collections. Although visible through a glass door, Pombas is somewhat emblematic of this. A famous and celebrated artist when alive, Portinari was commissioned to paint murals for the Hispanic Room of the Library of Congress in 1941 and invited by Eleanor Roosevelt to feature his work in a Howard University exhibition that dignified the Black Brazilian experience the same year. Even so, he eventually faded from view.

Learning more about Pombas was bittersweet. Portinari’s last trip to Paris in the autumn of 1961 was anything but joyful. He was declared persona non grata in Le Havre for having decried the French bombing of a small Tunisian village in 1958, nearly two years after the country’s independence from France. The year 1958 also has a fortuitous connection to my father: that spring, he immigrated to France via Marseille to overcome a dispiriting lack of opportunities for Tunisian youth. Portinari returned to Rio de Janeiro after being granted a 60-day visa in France, but protracted political persecution and worsening lead poisoning symptoms caused by the paint he used precipitated his untimely death in 1962, aged only 58.

The story of my father’s contribution to Pombas is a little window that opens onto the vibrant world created by Portinari, whose artistic legacy should be remembered and celebrated. He painted Brazil and its people, particularly the forgotten laborers, neither pitied nor exalted but with restored humanity. When I discovered Portinari’s art, it immediately resonated with me because someone like my father could have graced one of his canvases.

The present building owners were thrilled to learn the genesis of Pombas. They let us photograph the panel to our heart’s content. But still very few people recognised the piece as a true work of art. Sheltered from the elements, Pombas remains in pristine condition. It’s as if my father had just finished laying the last tile. I can picture him picking up his tools and meticulously cleaning up. While saddened by the absence of any photograph of him at work there, I take comfort in the fact that the peaceful doves exist at all.