Six museum exhibitions to see in Seoul during Frieze 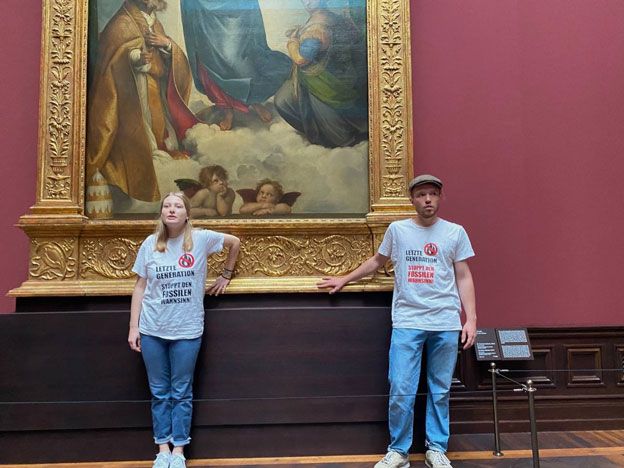 Climate emergency activists have recently made their mark in the UK and Italy and are now targeting museums across Germany, adopting the same tactic of gluing themselves to major works. In the past week, protestors from the Letzte Generation (last generation) group have attached themselves to four masterpieces beginning with Raphael’s Sistine Madonna (1512-13) in the Gemäldegalerie Alte Meister in Dresden on 23 August. Their aim is to “stop the fossil fuel madness” according to the group’s website.

The Letzte Generation protestors then went on to glue themselves to Lucas Cranach the Elder’s Rest on the Flight into Egypt (1504) in Berlin’s Gemäldegalerie. They also affixed themselves to Landscape during a Thunderstorm with Pyramus and Thisbe (1651) by Nicolas Poussin at the Städel Museum in Frankfurt. “The [Poussin] painting today is symbolic of the destructive course of current politics,” the group says in a statement, adding: “just as Pyramus started from false assumptions, our government is starting from false assumptions that will lead our societies to collapse.”

Peter Paul Rubens’s Massacre of the Innocents (1638) in Munich’s Alte Pinakothek is the latest work to be singled out. One of the activists involved in the Rubens intervention on 26 August, Michael Winter, says in a statement: “I’m sticking myself to this painting today because I’m desperate. The climate catastrophe is already here, we are already seeing people losing their livelihoods in flood disasters like in the Ahr Valley [in North Rhine-Westphalia]. Our children will also die if our government does not act appropriately [in relation to] the climate emergency.”

According to the Deutsche Wellewebsite, the frame of the Rubens work was damaged. “It is not legitimate to damage unique testimonies to humanity’s culture to denounce given climatic problems,” Bernhard Maaz, the director general of the Bavarian State Painting Collections that manages the Alte Pinakothek, told the website. But a spokesperson for Letze Generation insists that its members glue themselves “carefully to the sides of the picture frames so that none of the original art pieces are damaged”.

The interventions in Germany follow a number of similar actions in the UK and Italy at major museums and galleries by the Just Stop Oil and Ultima Generazione groups respectively. According to the Observer, both Ultima Generazione and Just Stop Oil are funded by the Climate Emergency Fund, a Los Angeles-based organisation created by three millionaires in 2019 to support environmental activism. In a statement, Letzte Generation confirms that it too receives “financial support” from the Climate Emergency Fund.