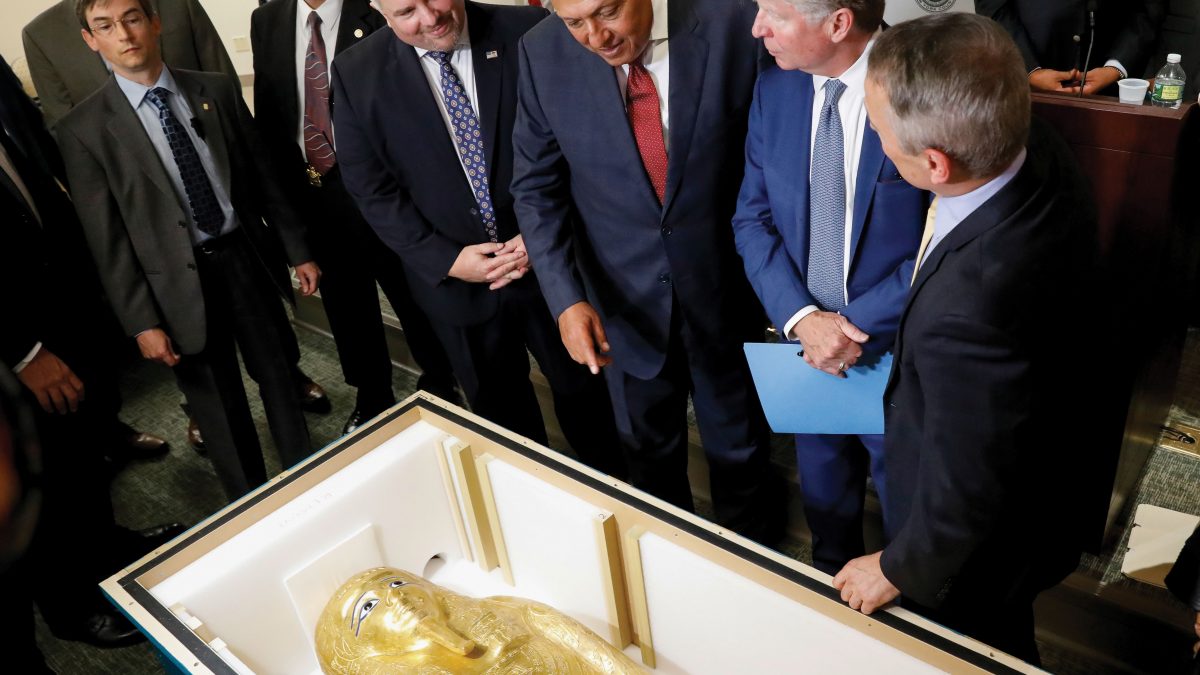 Several public museums and universities in Germany have become embroiled in criminal investigations into the widespread trafficking of Middle Eastern antiquities, which have seen the seizure of a gold sarcophagus and five other works from the Metropolitan Museum of Art in New York and the indictment of seven dealers, collectors and curators in Paris, including Jean-Luc Martinez, the former president of the Musée du Louvre.

According to sources close to the investigation, both in France and Germany, the Parisian judge Jean-Michel Gentil has issued European arrest warrants against four dealers based in Hamburg: Roben Dib (now detained in Paris), Serop Simonian and two of Simonian’s children. Simonian is understood to have played a crucial role as the supplier of the masterpieces sold to the Metropolitan Museum and Louvre Abu Dhabi, among others.

“The extradition procedure against the father is still pending,” a spokes­person for the Hamburg prosecutor told The Art Newspaper. “The arrest warrants against the children have been declined because they will be prosecuted in Germany. At first, they chose not to answer any questions and not to appear at police interviews, although one of them has since denied all the allegations through an attorney.”

In 2020 in Hamburg, local police raided both the Dionysos gallery of Ancient Coins and Antiquities, and the apartment of Simonian. Serop, now aged 80, is a member of an Armenian family of dealers, originating from Cairo, who has been active in Germany for decades. Questioned at the time by The Art Newspaper, both Simonian and Dib, the manager of his gallery, claimed they had proper export and shipping documents from Egypt dating from the 1970s, a time when such a trade was legally permitted. They also claimed that most of their pieces came from Serop’s late brothers, Simon and Hagop Simonian. According to their version of the story, Simon bought the stock of a Cairo dealer named Habib Tawadros and Hagop was responsible for the Assiut-based Pasha Khashaba Bey Collection, which was sold and exported in the early 1970s. Both also insisted that several of the objects under investigation could not have been looted during the 2011 Egyptian revolution, as alleged in the media, because they had been registered long before in German collections and museums.

According to a series of new statements collected by The Art Newspaper from curators across Germany this summer, Serop Simonian had indeed sheltered his stock in several museums for decades. Born in Cairo in 1942, Serop Ohan Simonian completed his PhD on decorated sarcophagi in 1973 in Göttingen, where he established ties with future curators and scholars. Eleni Vassilika, who headed the Roemer & Pelizaeus Museum in Hildesheim from 2000 to 2005, after ten years as the keeper of antiquities at the Fitzwilliam Museum in Cambridge, says she was “shocked to learn that Serop Simonian was keeping his stock in the [German] museum’s warehouse”. For the first time, she has agreed to talk to The Art Newspaper about this experience.

Vassilika became aware of the situation when she was presented with a document for the purchase of an alabaster vessel, a model boat and a diadem from a “Hamburg collector” later identified as Serop Simonian, for more than €250,000. She says she was told that, under a contract signed with the city through the Roemer & Pelizaeus Museum’s former director, Arne Eggebrecht, the “collector” would lend works to the museum’s touring exhibitions and, as “compensation”, the city of Hildesheim would buy some of them for its museum. “In an exhibition set up for three months in Taiwan, 30% of the objects were owned by Simonian without being labelled as such, even as loans,” she says. She found that the ones proposed for sale to the museum had been “heavily restored” and informed the board. The transaction was suspended (although Simonian obtained his payment later in court).

As a woman of strong character and a foreigner, Vassilika was already at odds with some city officials in Hildesheim and the local media. “All hell broke loose,” she says, “I was lambasted in the press. They pretended I was accusing my predecessor of trying to sell fakes, which was untrue.” Her assessment was supported by the director of the Egyptian Museum in Berlin, Dietrich Wildung, who stated that the three objects, having been restored with modern elements, had “lost their authenticity”. At least one object was supposed to come from the Khashaba Collection, but in his affidavit, dated 29 May 2001, the eminent Egyptologist pointed out that “a common way to cover objects of unclear provenance was to say they had come from this collection”. The Khashaba Collection is indeed only documented by a partial inventory, typed in 1931 with 48 photographs, which is kept in New York’s Metropolitan Museum. Wildung also stated that the three pieces were “clearly overpriced”. They were sold for €200,000, but in the museum’s database they were valued at about €100,000, and, in an estimate requested by investigating police, Sotheby’s considered them to be worth around €50,000.

Eggebrecht responded by saying that the objects had been vetted by Louise Gestermann and Ursula Rössler-Köhler from the University of Bonn, but only on the basis of photographs and without mention of the restoration. The American scholar Robert Bianchi published an article in 2001 in Antike Welt praising the works and assessing such restorations as normal practice. “Dr Bob”, as Bianchi is nicknamed, had also presented works from Serop Simonian in exhibitions he curated in Madrid and in the US on behalf of the Hildesheim museum.

In his statement, Wildung also found it “problematic that a dealer could shelter his stock for such a long time in a museum without any contract”. Vassilika says she discovered that Simonian “had been keeping dozens of crates in the museum’s warehouse, above a tyre garage. There was no formal inventory entry, nor was any contract signed with the museum or the city. And, of course, no check done of any historical provenance.” She remembers a blue faience hippopotamus, which was sold in 2015 to Louvre Abu Dhabi for almost €1m. Interviewed by the police, the conservation curator testified that only Simonian and the former director had access to the crates, moving and labelling objects on weekends or at night. In February 2001 the district attorney opened a criminal investigation “for breach of trust and fraud” against both Simonian and Eggebrecht.

According to the files, on 9 November the chief investigator reported that “Eggebrecht might have benefited from financial advantages from his friend Simonian, through an account in Switzerland”, and sought a warrant to search his house and accounts. But the case was closed in December 2001 when Eggebrecht was struck down by terminal cancer. In 2002 the city and the museum asked Simonian to remove his stock, which was, according to several curators, dispatched onwards to other institutions in Bonn, Trier and, later, Mannheim.

Wildung now tells The Art Newspaper that “Serop Simonian also offered some works to the Egyptian State Museum in Munich which I was heading, about 40 years ago. I cut short any contact with him, because of their obscure provenances. And I heard that one of his brothers had problems with Egyptian antiquities. We were all shocked to learn that his collection had landed in Mannheim.”

In a statement to The Art Newspaper, the Reiss-Engelhorn Museum in Mannheim says that “part of the Simonian collection was only in the museum for a couple of months in 2012 until early 2013, for checking. Serop Simonian offered a long-term display agreement, but it was declined because he failed to provide reliable provenances and there were even doubts as to the authenticity of some of them.” Michael Höveler-Müller, an archaeologist who was in charge of the project, then resigned. The Mannheim museum says it provided last year “all the relevant information and documentation requested by the federal criminal police”.

Part of Simonian’s stock went to Bonn, where Höveler-Müller became the director of the University’s Egyptian Museum from 2009 to 2011. According to statements provided by Serop Simonian, the Tutankhamun stele and the funerary set of a princess that were sold to Louvre Abu Dhabi, as well as another stele seized in New York and returned to Egypt, had been stored in this museum in Bonn until 2010, along with 50 other works.

In Trier, according to several curators, the contacts with Simonian started in the mid-1980s when Günter Grimm, the head of the University Institute, opened a small Late Period gallery in the Institute with the dealer’s properties. Other sources close to the investigation say that the Trier institute held the fragments of the Book of Exodus that was bought by the Metropolitan Museum and which has now been seized by the New York District Attorney, and the Artemidorus Papyrus, which was at the centre of a huge scandal in Italy (see box). Grimm also signed a certificate of authenticity, along with Robert Bianchi, for the colossal head of Cleopatra sold in 2018 to Louvre Abu Dhabi for the astounding price of €35m. Grimm died in 2012, and neither Bianchi nor Höveler-Müller wished to comment to The Art Newspaper on the matter.

In Hamburg the state prosecutor says:“Investigations concerning other people or institutions have not yet been initiated and are not intended at the moment.” But as the scandal continues to unfold, French and American investigators are wondering whether these public bodies in Germany have, for several decades, unwittingly helped a dealer to store these major works with questionable provenances, switching them from one place to another, while continuing to run his business. “At least, when you consider the damage caused by looting, it is a relief that a light can now be shed on a past that has been covered up for so long,” says a prominent anonymous German Egyptologist.

Eleni Vassilika had no idea she would cross the path of Serop Simonian again when she was appointed in 2005 as the director of the Egyptian Museum in Turin. Just a few months before, the foundation for art and culture of the Compagnia di San Paolo, a bank that was the museum’s sponsor, had acquired the so-called Artemidorus Papyrus. Attributed to the first-century BC geographer Artemidorus of Ephesus, the 2.5m-long roll described in Greek the Iberian peninsula, with an unfinished map illustrated with 40 drawings of human physiognomies and animals, real or fantastic.

The papyrus, it would appear, belonged to Simonian, who claimed it came from the Khashaba Collection. Its existence was revealed in 1998 in a study authored by Bärbel Kramer, the professor of papyrology in Trier, where Serop kept part of his stock, and a Milanese colleague, Claudio Gallazzi. Another scholar, Salvatore Settis, tried to help sell it to the Getty Museum in Los Angeles in 1999, according to legal documents. Settis and Gallazzi persuaded the Compagnia di San Paolo to buy it for a record €2.75m. But, when the bank exhibited it in 2006 in the Palazzo Bricherasio in Turin, for the Winter Olympic Games, it was denounced as a fake.

Vassilika resisted the pressure from the bank foundation to exhibit it as a permanent loan to the museum. She says that when she asked about its provenance, she was provided with differing statements saying that it came out of Egypt after the Second World War, and in 1971. In 2009 the board of the museum and its scientific committee unanimously “refused to accept” such a controversial piece. For some scholars, it is an outright forgery from the 19th century, for others, the piece might have been antique but the drawings were obviously modern. Others pointed out an inconsistent restoration allegedly undertaken in Stuttgart. Dietrich Wildung staged an exhibition of the papyrus in 2008 in Berlin, and he tells us he still firmly believes in its authenticity.

In 2016 the Turin prosecutor charged Simonian with “aggravated fraud”, but in 2018 the case was closed because of the statute of limitation.