In with the cuffs, out with the glue: Italian climate change protestors chain themselves to chapel banister 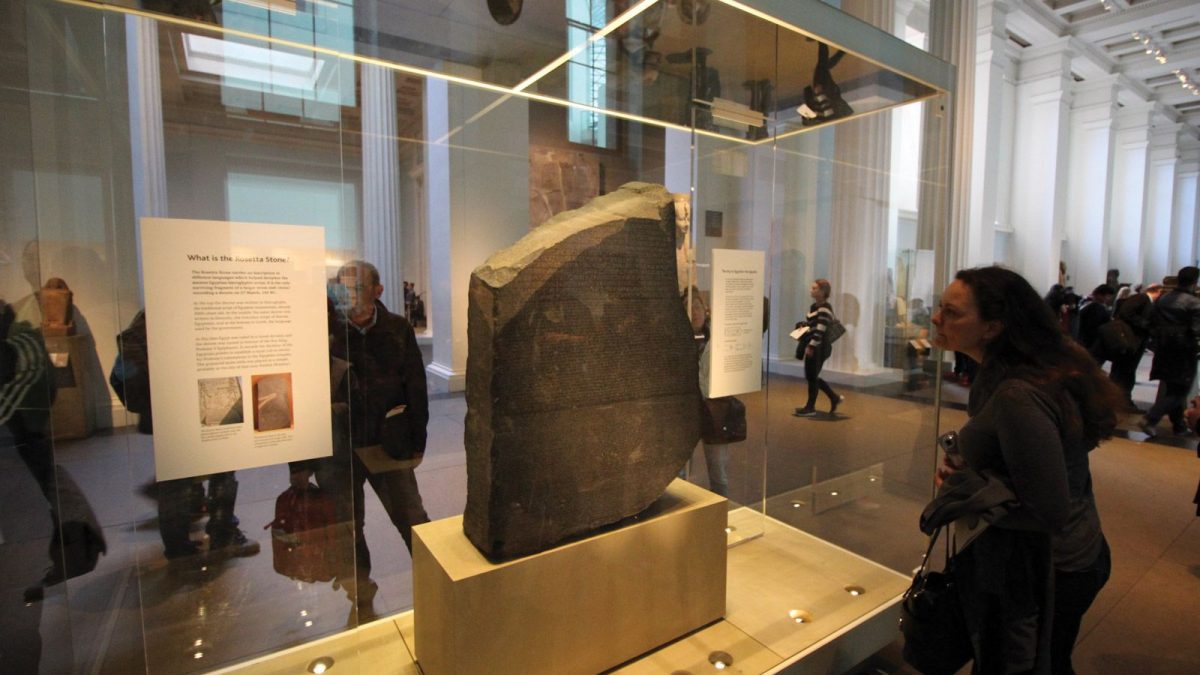 Egypt’s high-profile archaeologist and former antiquities minister, Zahi Hawass, is on the campaign trail yet again, announcing a new offensive to bring the Rosetta Stone back to its homeland from the British Museum. Hawass told the Middle Eastern newspaper, The National, that the Rosetta Stone, along with the bust of Nefertiti (currently in Berlin’s Neues Museum), and the Dendera Zodiac ceiling (housed in the Musée du Louvre) should be returned permanently to Egypt.

The Rosetta Stone (196BC) was found in Memphis, Egypt in 1799 by a French military officer. Two years later it was seized by British forces in Alexandria and shipped to England. In 1802 the stele, which enabled hieroglyphs to be deciphered, was given to the British Museum.

The Nefertiti bust (around 1340BC), which was discovered by the German archaeologist Ludwig Borchardt in Amarna in 1912, is housed at Berlin’s Neues Museum. The sandstone Zodiac ceiling with its map of the stars (50BC), was discovered in Dendera by the French archaeologist Vivant Denon in 1799. In 1822 it was removed and taken to Paris for the French national library; in 1922 the Zodiac ceiling was transferred to the Musée du Louvre.

Hawass told The National that he plans to launch a petition “signed by a group of Egyptian intellectuals” which he will start sending to the European museums involved in October. “I believe those three items are unique and their home should be in Egypt,” he said, tapping into the latest shift towards objects being repatriated from Western museums such as the Benin bronzes. Hawass was unavailable for comment.

In 2011, Hawass served as the Egyptian minister of antiquities, but since then he has worked independently. In 2007 he asked for the loan of the aforementioned three treasures for the very ambitious and much-delayed Grand Egyptian Museum near the Pyramids, which is due to open later this year.

In 2019 Hawass relaunched his restitution campaign, asking the directors of the Berlin State Museums, the British Museum and the Musée du Louvre: “How can you refuse to lend to the new Grand Egyptian Museum when you have taken so many antiquities from Egypt? The Grand Egyptian Museum will be the largest and best in the world.” All three museums refused his loan requests.

A British Museum spokesperson says: “At the British Museum, visitors can see the Rosetta Stone alongside other pharaonic temple monuments, and also within the broader context of other ancient cultures including their contemporaries such as Rome, Athens and Persia, allowing the public to explore this vast arc of history…. as with all of the collection, the Rosetta stone is available to all interested audiences, whether in the galleries or via appointment to support academic research. We also engage widely with people all over the world via our website alongside 3D scans of objects on our Sketch Fab site which includes the Rosetta Stone.” The Rosetta Stone will be on display in the upcoming exhibition Hieroglyphs: unlocking ancient Egypt (13 October-19 February 2023).