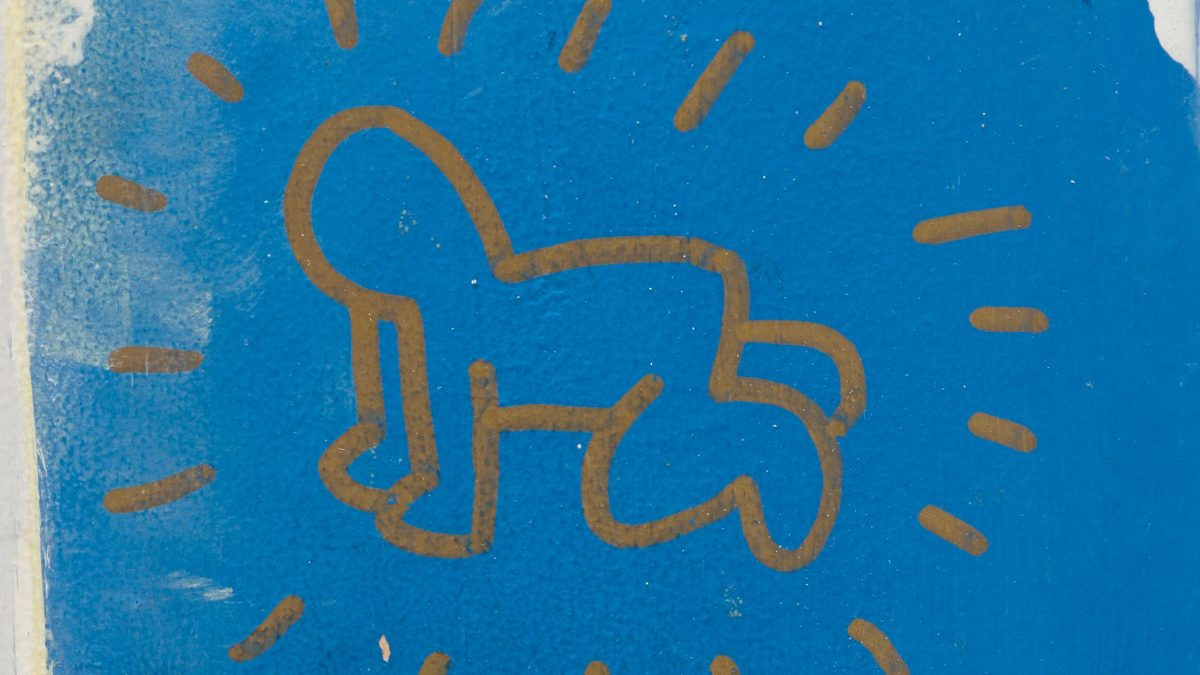 Picture, if you will, a work by Keith Haring. For some, a t-shirt might come to mind. For others, perhaps a poster calling for the end of apartheid in South Africa. For many the image will be Haring’s work in its natural element, as part of the streetscape of New York City.

Haring was celebrated for his street art savvy, emphasis on accessibility and his choice of concrete over canvas. But the New York City walls are not the only ones that sparked his imagination. Coming up for auction on 14 September during Rago/Wright’s post-war and contemporary art sale is a drawing of his signature “Radiant Baby” figure that he made on the wall of his bedroom, just above a light switch, in his childhood home in Kutztown, Pennsylvania.

Haring left Kutztown after high school, but even at the height of his popularity he would travel back home to spend time with his family. The exact date the wall drawing was made is unknown, but it was during one of these visits that, above the light switch in his blue-painted room, he drew the “Radiant Baby” with a paint pen in a deep but vibrant gold. At five inches wide, the drawing itself is small, but the work for sale includes a significant portion of the wall it was painted on.

“The piece is amazing because it’s on the wall of [Haring’s] bedroom where he grew up,” says Christine Isabelle Oaklander, an art historian who is assisting the former Haring home’s current owners in bringing the work to auction. She adds, “It’s really a tag [saying] that this is Keith Haring’s room. There’s literally nothing else like this.” Nearly as unique as the piece is how it came to auction in the first place.

Angela and Scott Garner purchased the Victorian home in Kutztown in 2004. According to Oaklander, the home’s prior owner told the Garners that the five-inch drawing of a shimmering infant had nearly been painted over because the prior owner “didn’t think it was very interesting”. The evidence of that near-disaster is clear. Pictures of the drawing-wall-light switch combo provided by the auction house show the gold on blue drawing is bordered by a bland colour that most homeowners will recognise as something on the paint shop’s colour wheel fan deck as something in the family of eggshell white.

But, as fans of the artist, the Garners were enraptured by the tag and reached out to Allen Haring, the artist’s father before buying the home. The elder Haring not only authenticated the drawing but also signed a letter of authenticity that will accompany the work after it is sold.

To give Haring-heads some insight into the drawing, an eight-and-a-half-minute video was produced, directed by Brandon Wunder. In the video the Garner family tells the story of finding the house and living with the work. There are also interviews with Oaklander and Kutztown Historical Society archivist Brendan D. Strasser.

Also included in the auction will be two posters, found in the closet of Haring’s old bedroom, that the artist made for the benefit events Long Island Focus on Art in 1988 and City Kids Speak on Liberty in 1986, as well as a cubbyhole unit built by Allen Haring for the four Haring children—Keith, Kay, Karen and Kristen.