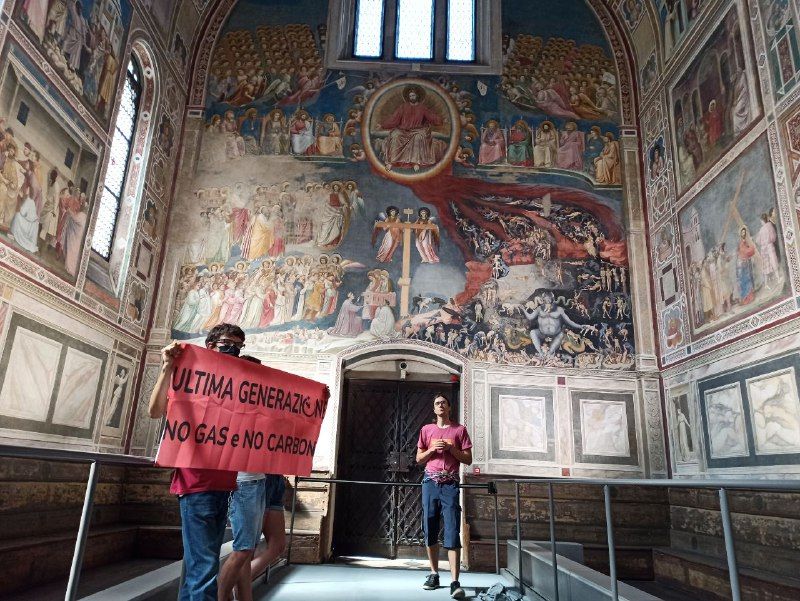 Italian climate change activists have staged another intervention, this time with different tactics. On 21 August, demonstrators from the Ultima Generazione group chained themselves to a railing in the Scrovegni Chapel in Padua, Northern Italy. The group says that after 30 minutes the activists were taken away in handcuffs by police. In previous protests, including an intervention at the Vatican Museums last week, the activists have glued themselves to important works of art.

Ultima Generazione says in a statement: “Allow us to admire starry skies and the splendid works of art and human ingenuity such as the Scrovegni Chapel for a long time. Allow us and the next generations to be witnesses of our history.” The chapel, built in the early 14th century, is adorned with frescoes by Giotto.

The group adds: “We ask museum workers to strike with us and to position themselves clearly against the use of fossil energies, and also [stand up] in defence of our cultural heritage.” Ultima Generazione reiterated its aims, which “are simple and would allow us to take a first step to combat climate change… immediately stop reopening disused coal plants and halt any new oil and gas extraction projects, and increase solar and wind energy by at least 20GW (gigawatts) this year, creating thousands of new jobs in renewable energy.”

The interventions in Italy follow a number of similar actions in the UK at major museums and galleries. In July, environmental activists from the group Just Stop Oil glued themselves to the celebrated Constable painting The Hay Wain (1821) at the National Gallery in London. Kelvingrove Art Gallery and Museum in Glasgow, Manchester Art Gallery and the Royal Academy of Arts in London were also targeted.

According to the Observer, both Ultima Generazione and Just Stop Oil are funded by the Climate Emergency Fund, a Los Angeles-based organisation created by three millionaires in 2019 to support environmental activism.

Speaking to The Art Newspaper, a spokesperson for Climate Emergency Fund (CEF) says: “CEF is a nonprofit that supports the brave activists who are transforming climate politics. CEF makes strategic investments in emerging, ultra-ambitious organisations that confront the climate emergency with urgency and scale, through protest, disruption, and non-violent direct action.”