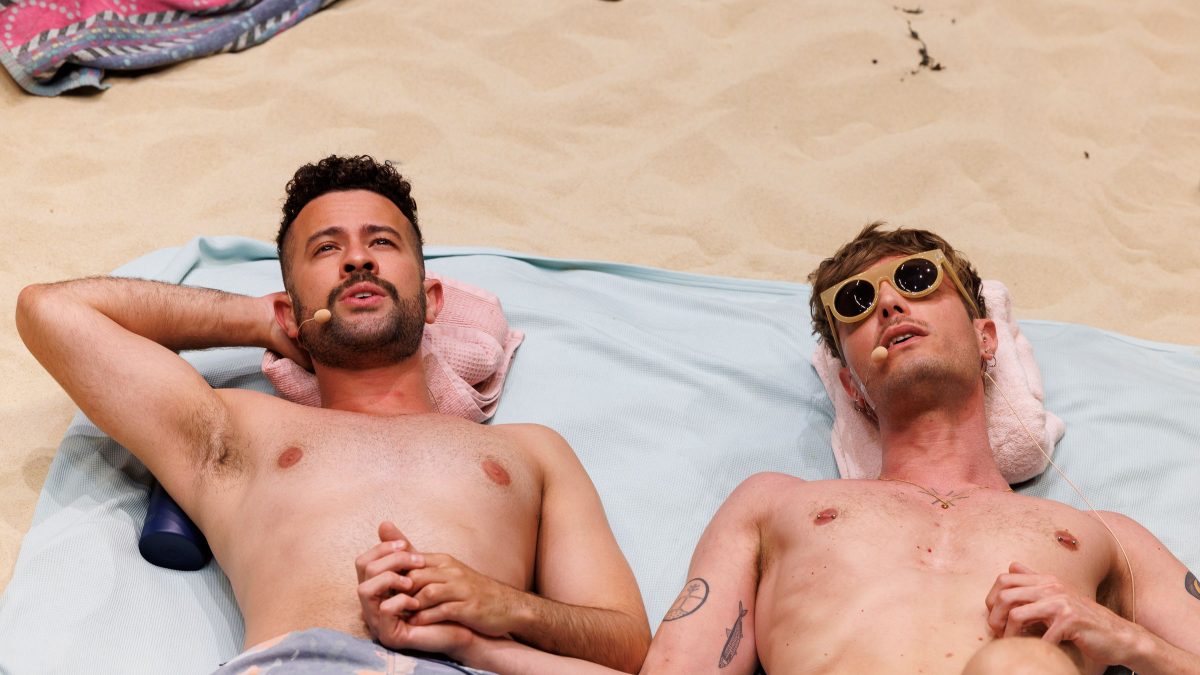 Never has Oscar Wilde’s sardonic observation that life imitates art seemed more apt than during the record-breaking heatwave which has just scorched and parched much of England, along with a sizeable chunk of Western Europe. This inferno confirmed beyond any possible shred of doubt that global warming is here with a vengeance; and two shows staged in London during this sweltering summer of discontent resonated so strongly with their steamy surroundings that, although both had been created before the mercury started to rise, their presence appeared almost uncannily prophetic.

The brilliant opera-cum-performance Sun & Sea (Marina)—the work of the three-woman creative team of composer Lina Lapelytė, librettist Vaiva Grainytė and director Rugilė Barzdžiukaitė—has garnered wide international acclaim following its debut as the Lithuanian Pavilion in the 2019 Venice Biennale, where it was awarded a Golden Lion.

This buzz was only reaffirmed by its UK restaging at The Albany arts centre in Deptford, south-east London, in late June, where it opened to a city of parched parks, stagnant waterways and suburban wildfires. Much in the same way that Sun & Sea’s sunbather-protagonists seemed to be in denial of the seriousness of their situation as they lounged around, reading books and checking their phones while occasionally breaking into song, so the English government assumed a similarly blithe indifference to the catastrophe erupting around them. Instead of confronting the issues, our ministers vanished off on their various summer vacations, only emerging in order to bicker about who should be their next leader.

The piece’s prescence in Deptford— an historic Thames-side neighbourhood with a rich maritime history—only added to its relevance. The area is now one of London’s most deprived, which means it is especially vulnerable to the economic impacts of climate change. As well as using many local community members as incidental performers, Sun & Sea’s curator, Lucia Pietroiusti, donned a swimsuit and took part with her son on the opening day. Another symbolic local touch was the discreet positioning of a local council dustbin on the artificial beach, which contained 14 tonnes of imported sand.

More spurious escapism is offered in Lydia Blakeley’s The High Life at Southwark Park Galleries. Here vibrant new paintings of shimmering pools, exotic vegetation and elaborate seafood platters—some painted directly onto sun loungers—are accompanied by sculptural cooler boxes filled with healing crystals and planted with cacti. But although Blakeley presents all the clichéd trappings of idyllic holidays, even down to the blue-skied view from airplane windows, everything is too pristine and perfect. In The High Life, the overall effect is ominous and disquieting rather than soothing and relaxing: sunlight is harshly, unforgivingly bright and the arrangements of poolside inflatables, oysters and octopuses are overly slick and immaculate.

At the same time there’s also a tackiness to the plastic chairs and fish dinners. It’s the contrived aspirational stuff of brochures slightly past their sell-by date, peddling a dream that carries a devastating environmental cost. Nonetheless, even against our better judgments, the distant, sun-drenched, poolside retreat remains an enduring aspiration that, thanks to decades of marketing and especially over the recent Covid lockdowns, we continue to be guiltily susceptible to.

Blakely plays with and off these conflicting feelings. Her starting point was the 1995 Microsoft advertising campaign Where do you want to go today? which showed a montage of people excitedly meeting and making global connections via their newly-available PCs. There are obvious parallels with the then-novel notion of armchair travel and our more recent experience of the Covid-19 pandemic where people were forced to experience the world through the internet and to substitute travel for digital encounters.

But while it became quickly evident that the environment was palpably reaping the benefit of a grounded world population, and while there was much talk about how things had to be different post-Covid, the beleaguered travel industry was also trying to recoup its pandemic losses with a bombardment of budget holiday adverts. These tapped into our hard-wired escape fantasies, trying—often successfully—to drum up advance bookings by using every seductive image in their armoury.

As London emerges gasping from two months of relentless sunshine, there’s little respite offered by Blakeley’s parade of blighted bucket-shop memories. I’d rather her Thermos cooler boxes were filled with ice than ground-up amethysts, rose quartz and orange calcite, however powerful their purported restorative qualities are. In this scary, sanitised, flawless, fantasy world, the natural world is tidied up and artfully arranged, with the marine world served up lifeless, to be consumed poolside or in a hotel dining room in the name of luxury.

Blakeley’s vivid, deeply disturbing images stand as a harsh reminder that, however hard we try—or however hard market forces try to convince us—there is no such thing as “getting away from it all”. These two shows confirm that we are inhabiting a scarily worsening new normal, and one of our own making. Summer may now be ending, the weather may now be changing, but rather than wish we were somewhere else, we now need to take action directly around us before it is too late.