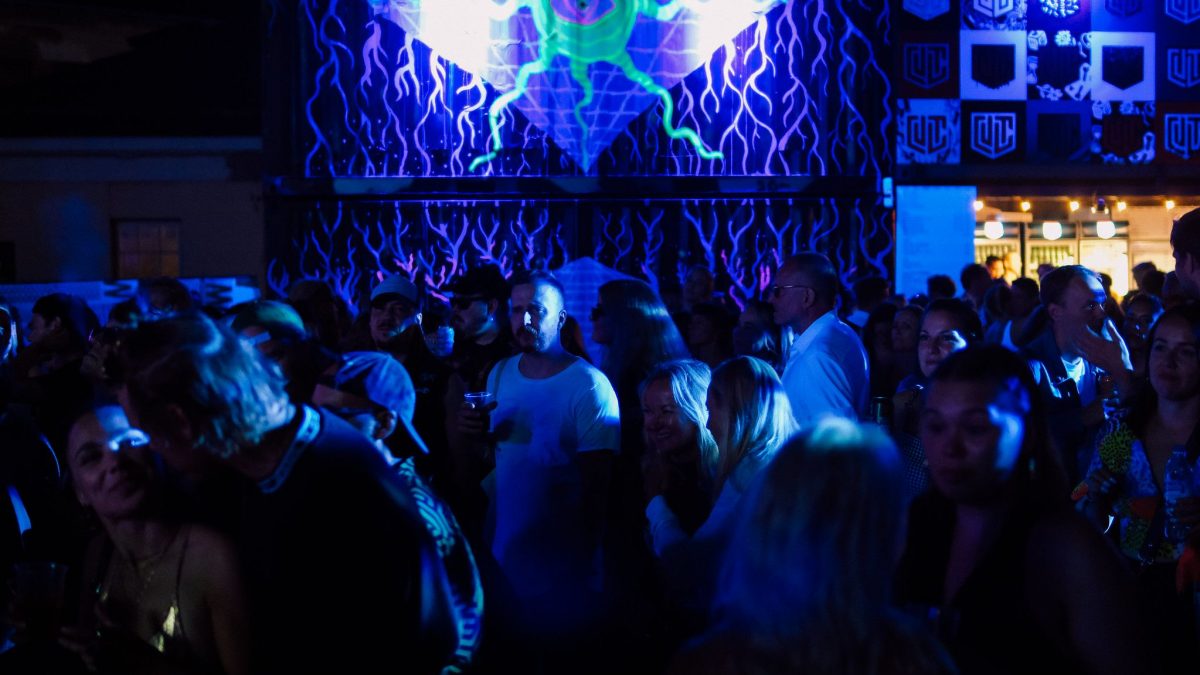 The last thing I expected was to go scouting for art at Helsinki’s Flow Festival (12-14 August), the wildly popular annual music festival back after a two-year pandemic-induced hiatus. Exhibiting a major installation work by the Helsinki-based Iraqi artist Adel Abidin, Musical Manifest, it piqued my interest. The festival, organised by the music collective Nuspirit Helsinki, has grown from humble, nu jazz and soul-influenced beginnings in 2004 at an old railway warehouse with an audience less than 5,000 people. Now held at Suvilahti, a former power plant near the hipster neighbourhood of Kallio, and with 90,000 visitors (willing to pay €199 each for a three-day ticket), its lineup straddles the threshold between the mainstream and the eclectic including international acts such as Florence and the Machine, Gorillaz, and the legendary 1980s band Nick Cave and the Bad Seeds, alongside local Finnish talent.

Curious about how the art interventions—some of which had a theme park or street art feel—would read in such a broad context, I spent the first couple of days just trying to find the art. It kept eluding me. The playful Millennial Muses for example, murals and animations by Björk Hijoort and Tiia Kasurinen, became psychedelic backdrops for electronic DJs. This became a theme.

The installation art in the experimental Other Sound venue—put together by the design collective Sun Effects, which has been doing the lighting design and visuals for the stage for Flow since 2007—looked like it was part of the decor, including Ville Mäkelä’s clown-faced depiction of Putin in neon was tucked behind the bar. Merle Karp’s double-channel video installation of resplendent nature felt atmospheric rather than being a work about the terrifying future implications of climate change.“Light and video works may be considered abstract compared to other art forms,” said the collective’s artistic director Matti Jykylä. “But this exhibition is about reality. Merle Karps video piece can be utopic on the surface but as South Europe, California etc are burning, the work becomes super-concrete.”

Environmental consciousness is a huge thing for Flow’s pioneering carbon-neutral approach, where the lines to return glasses (€1 refund each) were longer than those for organic food concepts. With no red meat or poultry on offer, this was not your typical selection of festival nourishment. “Music is just one of the elements of the Flow experience,” says the festival’s artistic director Tuomas Kallio. “While visual art was always present at the festival, at first mainly through video, light and various design projects, we have been opening to installations and spatial works, especially.”

Here is where Abidin’s Musical Manifest at the Cirko space stands out. A series of five musical vignettes featured the artist singing slightly altered lyrics of unnamed pop songs in bizarre guises. In one his torso is labelled as the edible parts of an animal and in another he is the disjointed form of a beheaded man. Abidin sings without even trying—an interesting choice for a festival with such high production value—although the only video without lyrics is the strongest. There were black screens declaring the video’s removal and evocative freeze frames of analogue quality. Each video was screened in a randomised fashion that belied any kind of linear narrative. If you got past the atonal chants and at times unconvincing roles, this work portrayed Abidin—known for his ironic references to identity politics and the language of fear—as subject to self-examination, casting a certain vulnerability. The work alludes to the cultural appropriation that is the burden of the immigrant seeking artistic refuge.

I lay on plywood beds in Tiilikello x Polestar—the spectacular gasometer-turned-art space organised by Emmi Kattelus—to experience the bulbous, chandelier-like sculpture Blowing Flower by Hanna Vihriälä. It hung from thousands of cable wires underneath the dramatic domed ceiling, which changed colour as part of Antti Tolvi’s low frequency vibrations—a sound and light work called Butterfly Effect—which I could feel in my body. I thought perhaps that was the most apt kind of art for this kind of context: abstract, wordless and immersive.