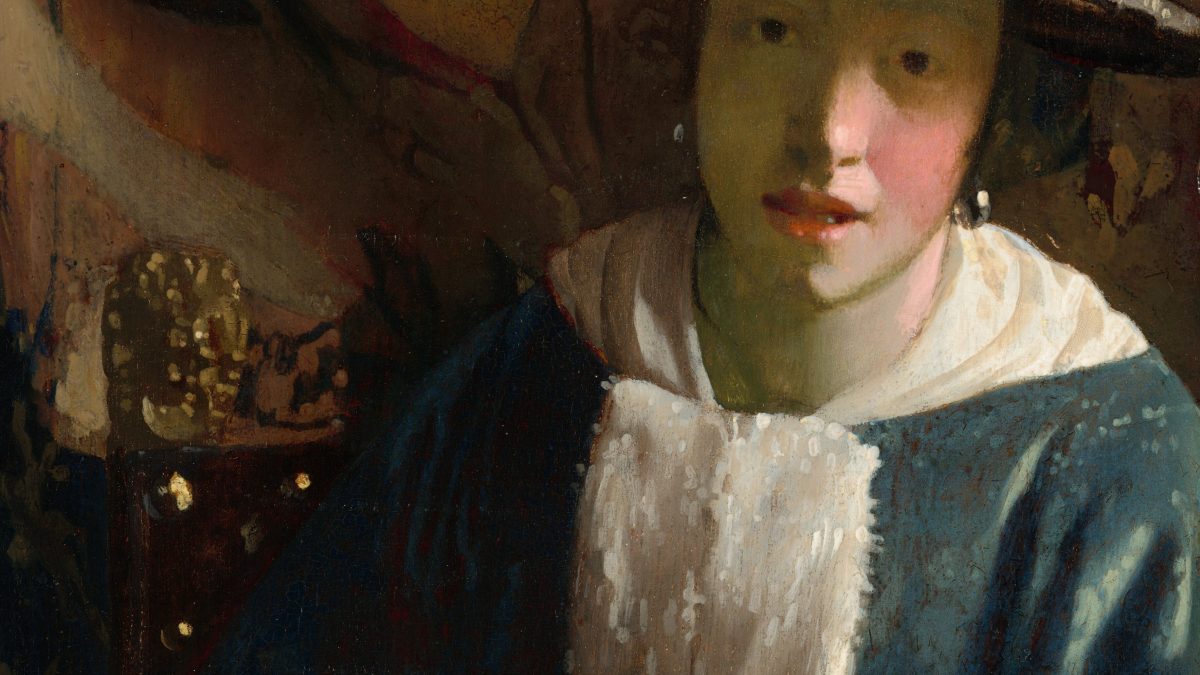 Two of Vermeer’s disputed paintings have been scientifically examined for an exhibition that will open at the National Gallery of Art (NGA) in Washington, DC in October. Girl with a Red Hat(around 1666-67) and Girl with a Flute (around 1665-75) have in the past both been questioned by many specialists.

The show Vermeer’s Secrets (8 October-8 January 2023) will present all four of the NGA’s paintings by or attributed to Vermeer—the two that have been questioned and two others that are fully accepted as authentic masterpieces. The lead curator, Marjorie Wieseman, is setting out to examine “what makes a Vermeer a Vermeer”.

Since the four works are nearly always on show, the NGA took advantage of the Covid closure in 2020-21 to move them to their conservation studio. There they were examined using the latest imaging techniques to penetrate the layers of paint.

Girl with a Red Hat is now fully confirmed as a Vermeer. But there is a surprise: the investigations reveal that when Vermeer began work on the oak panel he had painted a bust-length portrait of a man with a wide-brimmed hat, which he later transformed into a girl. This is unexpected, since Vermeer is not normally regarded as a portraitist (many of his faces seem to represent idealised people)—and he was particularly partial to depicting women.

Girl with a Flute proved more problematic to evaluate, and the dating (1665-75) with its decade-long spectrum, suggests that the painting may have had a complicated gestation. The final evaluation will be revealed shortly before the opening of the exhibition.

Discovered in 1906, Girl with a Flute was donated to the NGA by Joseph Widener in 1942. It was first rejected by the Vermeer scholar Pieter Swillens in 1950—and this view was followed by many later specialists.

In the 1990s the NGA’s own curator and Vermeer expert Arthur Wheelock questioned the work, designating it as only “attributed to Vermeer”. Although the respected specialist Walter Liedtke, of New York’s Metropolitan Museum of Art, continued to accept the painting, it was widely rejected by others.

Wheelock, who retired from the NGA in 2018, later changed his position. He wrote in the NGA’s web catalogue entry on the picture: “I have concluded that removing the Girl with a Flute from Vermeer’s oeuvre was too extreme given the complex conservation issues surrounding this image.”

The painting is certainly not up to the quality of most of Vermeer’s accepted works. Vermeer probably initially blocked-in the composition, in around 1665, but the image seems to have been extensively revised at a later date. The work is unfortunately abraded, which has made it more difficult to determine the attribution.

Along with these two questioned works, the NGA’s other two Vermeers have always been accepted as masterpieces: Woman Holding a Balance (around 1664) and A Lady Writing(around 1665).

The recent examination of Woman Holding a Balance revealed another surprise that may lead to a reassessment of Vermeer’s way of working. It has long been assumed that he painted slowly and meticulously, since only around 35 pictures survive from his 22-year career.

But imaging of the lower layers beneath the surface of Woman Holding a Balance reveals quick, spontaneous and sometimes thickly textured brushstrokes. This is very different from the fully completed surface of the picture, where the smooth individual brushstrokes are hardly visible. An NGA spokesperson explains: “This discovery brings into question the common assumption that the artist was a painstakingly slow perfectionist.”

All four paintings have been promised for a major Vermeer retrospective at the Rijksmuseum in Amsterdam (10 February-4 June 2023). The inclusion of Girl with a Flute suggests that the technical research has confirmed the attribution. The loan is quite a coup for the Rijksmuseum, since the NGA would obviously be very reluctant to lend all of its Vermeers at the same time.

Along with its four Vermeers, the NGA also has two crude 20th-century forgeries, which will be included in this autumn’s Washington, DC exhibition. These are The Lacemaker, which is based loosely on the 1669-70 original in the Musée du Louvre, Paris, and The Smiling Girl.

Both forgeries are now thought to have been created in around 1925, by which time Vermeer’s work had become highly collectable and fetched substantial prices. Both forgeries were part of the Andrew Mellon bequest to the NGA in 1937. The two were rejected as Vermeers by the NGA in the 1980s.

Looking at both forgeries now, when we know so much more about the master’s work, it seems astonishing to think that they were ever accepted.