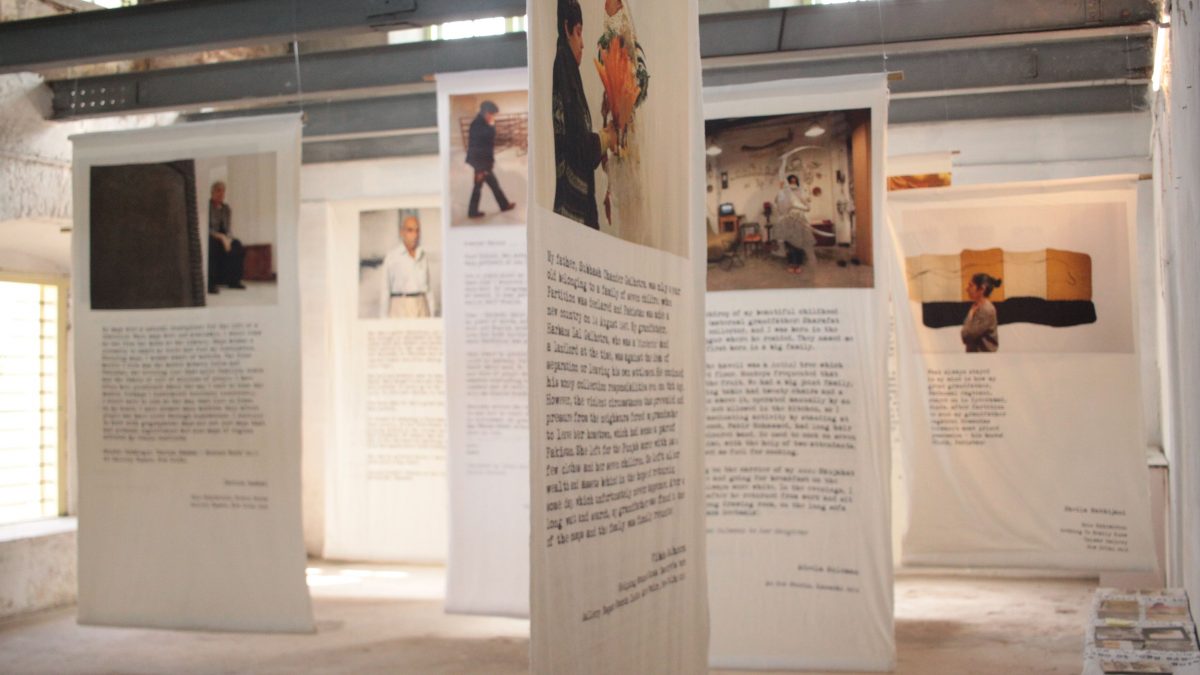 A tearful conversation with an artist from Pakistan ignited Postcards from Home: my photography and writing project that documents 47 artists from both India and Pakistan, all of whom share a connection with the partition of India in 1947.

Born to parents of pre-partition India, my childhood memories were embellished with stories of my parents’ homes in Quetta and Sargodha, both now in modern day Pakistan. Now in their 90s, my parents still miss the “home” they fled overnight, leaving all they had and the deep friendships shared over generations, never to return. These were stories that served as the fertile soil on which the seeds of my partition project were to be sown.

Getting visas is never easy on both sides of the border, but I have been fortunate enough to visit Pakistan a few times in the last 7 years. I initially travelled there to undertake another photographic project, which allowed me to spend long hours in many Pakistani artists’ studios, conversing with them over cups of tea, and photographing them as we spoke.

It was during these visits that I kept hearing stories around partition. However, this time they were from the other side of the border. But it turned out that the sentiments—those of deep pain, nostalgia, longing and love for what was once home—were as pervasive on their side as they were mine. What’s more, I realised that my subjects were healing through the act of narrating these stories to me. Repeating these tales seemed to soothe the permanently displaced. Each recounting gave them a muted hope that their memories might not be forever buried in the sands of time. These stories continued to echo inside me until I felt compelled to record them, so they could live beyond their teller.

The project consists of displays of 47 postcards—a number that was carefully chosen—that feature an artist photographed by me in their studios. On the card’s reverse is a memory of their “home” that has been lost.

I was invited to show the project at the inaugural Lahore Biennale 2017, where I shed tears with strangers as they narrated their stories of partition. It was probably the first public art project on the Partition by an Indian, exhibited in Pakistan. Later that year, Salima and Moneeza Hashmi, the daughters of the great poet Faiz Ahmed Faiz, whom both India and Pakistan call their own, invited me to exhibit at the Faiz Festival in Lahore. Countless viewers came during each of the four days during this cross border cultural exchange. And my collection of stories from both sides of the border kept growing as I exhibited the project at various venues, including colleges.

It soon dawned on me that the project was also speaking to those who haven’t witnessed partition but had experienced personal loss and longing, perhaps having left their war-torn homes for safer lands or in need for a better life. My project started being embraced by a wider audience rather organically wherever it was shown, whether in the Kochi Biennale in Kerala in 2018 or at the India Art Fair 2019 where it was shown as their main public art project. It is currently on display at the Ashmoleon Museum, Oxford until March 2023.

I am a firm believer in the “healing power of art”. The process of healing requires time, sharing and listening, which both our nations and its people haven’t done enough of. Those who witnessed partition are still deeply bruised and in pain. We, the kin of the victims of 1947, also carry a collective grief that persists. I sometimes ask myself if my children and their children will grieve the way we do, for that generation. I don’t have any answers, only prayers that they inherit a beautiful, simple and peaceful world, one that still lives in our parents’ memories.