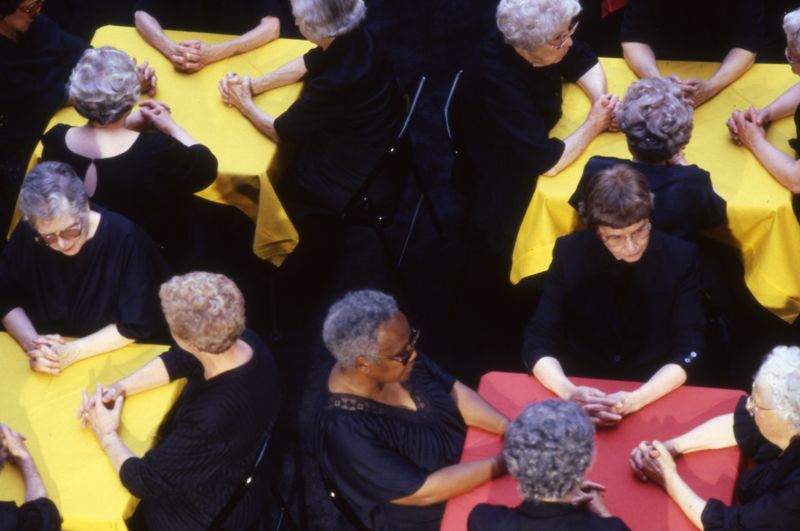 The Los Angeles-based artist Suzanne Lacy has operated largely outside the confines of the art world and within the public sphere for most of her five-decade career. From the 1970s onward, as an exponent of the feminist consciousness-raising circles of Judy Chicago and the Happenings of Alan Kaprow, she developed a social practice that reconfigured the parameters of performance art, centering her work on large-scale, long-term community projects focused on themes of violence against women, poverty, racism and more.

Lacy’s current survey at the Queens Museum in New York (until 14 August) revisits highlights of her practice, including The Crystal Quilt (1985-87), a project based on raising the visibility of older women in society. Over the course of two years, she and a team of collaborators hosted a series of leadership workshops and media campaigns for Minnesota-based women aged over 60, which culminated in a televised action in a Minneapolis shopping mall; 430 women gathered for a public conversation on the experience of aging, set on a highly stylised stage made to resemble the geometric patterns of a quilt. The work not only touched on the feminist themes of society’s neglect of older women, but also new forms of artistic engagement with the media, virality, relational participation and social choreography.

In a recent interview with The Art Newspaper, Lacy discusses the possibilities of both activism in the art world and art in public service, as well as the importance of virality in enacting social change.

The Art Newspaper: When you began making work in the 1970s, what was the state of what we now call “social practice”, and how has that evolved over the years?

Suzanne Lacy: You can trace various terminologies—community art, community-based art, social art, political art and then new genre public art, which I coined—but it doesn’t really matter to me what term you’re using. One of the innovations that racially- or feminist-based art introduced in the 1970s was a specificity of audience; when I went to CalArts, people were always talking about the universal audience, but we were beginning to think about who would be experiencing the work. Since then, there’s been a progression in how we think about audience, as well as participation, site, subject matter and strategies of engagement—are you mobilising people? Are you informing people? Are you protesting? Are you aligning with organisations? These are the concepts that have been evolving since I started.

What really interests me about your work is that it’s true activism, unlike a lot of superficially activist work being shown in galleries. How do you define activism and can it coincide with art?

Activism is impacting change. I’m not convinced that art does anything profound and unique in and of itself, but that it operates to support and push a general, social, political idea forward. The big conundrum of trying to operate as an activist purely within the art world, however, is that by and large, the people that go to galleries already think the way you do—otherwise they wouldn’t be in the gallery. What I’ve tried to do is apply forms of direct service—feminist, anti-racist and anti-poverty—within a conceptual art practice.

As a result, you’ve worked on dozens of community-based projects alongside hundreds of collaborators. How have you identified whom you want to work with, then subsequently structure your collaborations?

Right now, I’m teaching a class for University of Southern California graduates to support community organisers, academics and state legislators on the development of a cultural district in Allensworth, California, a historically Black community 15 miles from where I grew up. Whenever I do a project—usually in communities where I’ve been invited—I deconstruct the spheres of influence and power in that location in very specific ways. What are the police doing with respect to this subject? The schools? The public administrators? You meet with people, and you figure out where your values align, where the conflicts are and how to create coalition across conflict. This is an organising skill set, a lost art in contemporary politics.

In all of your actions, aesthetic composition is a major component, especially in terms of how it might capture media attention—you were going viral before the invention of the phrase. What is the importance of media intervention in an activist practice?

Media is a communication device that can lead to the transformation of public culture. In my work, I ask questions about how it operates, how it communicates on the subject of women, and how that can be challenged or transformed. The Crystal Quilt was about consciously reframing the media toward the visibility of older women, the least represented voice in American public media at the time. We worked with a communications volunteer to develop press kits and workshops for older women to go back into their communities and promote their voices in the public sphere. The performance was never going to be a bunch of people sitting around in different colour chairs; it was going to look really good, and it was going to have a lasting visual impact.

For many years, you operated almost entirely within the public sphere, rather than in museums and galleries. How has that affected your relationship with the art world, and more specifically the art market?

I consider myself an artist. Running for office might be more effective for social change, but a long time ago I made a decision to operate as an artist, to think visually and creatively. There’s a capacity for visual display and complicated theorising in the art world that you could not get in the community, and the museum space really provides a repository for the ideas and practices I’ve deployed over decades. And also of course you can change art itself, or the possibility of art-making. The art world has provided me an area to exert my influence and say that it’s okay for students to make social change through art, so that it’s no longer an outlier practice. But it’s a tricky business working within an art market. I think some people are doing it successfully: Hank Willis Thomas, Andrea Bowers and, more abstractly, Rodney McMillan and Charles Gaines. What I do for a living is teaching, but I think the best way to survive as an artist is to have a trust fund.