Damien Hirst confesses he’s been ‘all over the fucking shop’ about NFTs as he plans to burn 4,851 physical works 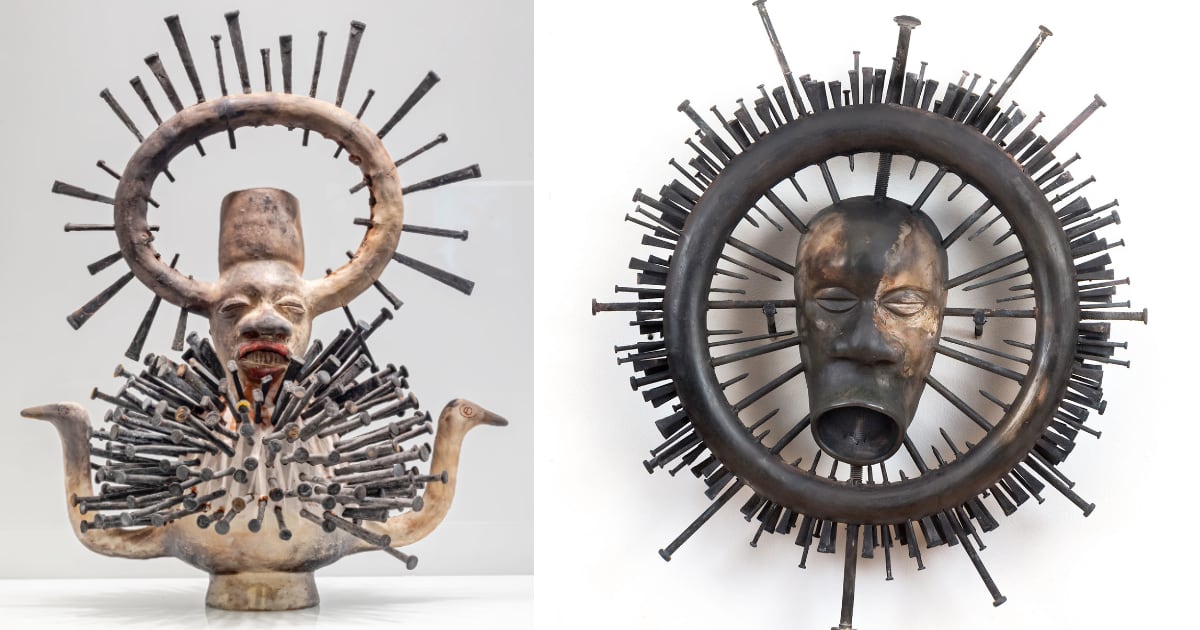 “The Oviary I,” earthenware, mixed media. All images © Sharif Bey, shared with permission.

Artist Sharif Bey centers his practice around recontextualizing, a process he undertakes by fracturing long-held perspectives through fragments. His figurative sculptures unify disparate materials and broad cultural references across generations and eras—his works are notably undated—drawing on both the aesthetics of West-Central Africa, particularly the spiritual protectors known as nkisi, and the industrial histories of his family and current city of Syracuse.

Largely crafted around bits of his own ceramic vessels, Bey’s works are on view at Toronto’s Gardiner Museum in a solo exhibition titled Colonial Ruptures, which questions the inherent value and power of objects, particularly as they’re stripped from their original cultures through colonial violence and structural racism. Bowed nails and rusted spikes evoke the artist’s familial ties to boiler making, a profession the show’s curator Sequoia Miller connects to the limitations of work for Black men in the 1960s: “It was one of the few ways that African American families could move into the middle class. [Bey is] thinking about his connection this whole lineage of labor, of production, of middle-class identity, and linking it to African American identity, [to] access to African cultural resources.”

Bey pairs those corroded metals with bits of shattered pottery and a reconstructed medley of his earlier sculptures, which he’s broken and repositioned into new figures. His expressive, earthenware faces often feature a crack through an eye or cheek, while aura-like rings of found scraps encircle their glorified forms. Each piece is deeply rooted in its original contexts and yet open-ended in the questions it suggests, a pairing the artist expands on in a statement about the exhibition:

I am inspired by folklore, functional pottery, modernism, natural history, and a lifelong affinity for West African and Oceanic sculpture. My works investigate the symbolic and formal properties of archetypal motifs, questioning how the meanings of icons, objects, and functions transform across cultures and over time.

In addition to Colonial Ruptures, which is on view through August 28, a broad survey of Bey’s works is also up through August 14 at the Everson Museum. You can find more of his sculptures on his site and Instagram. 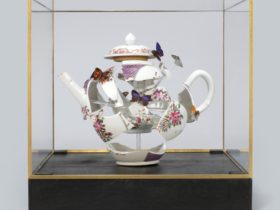