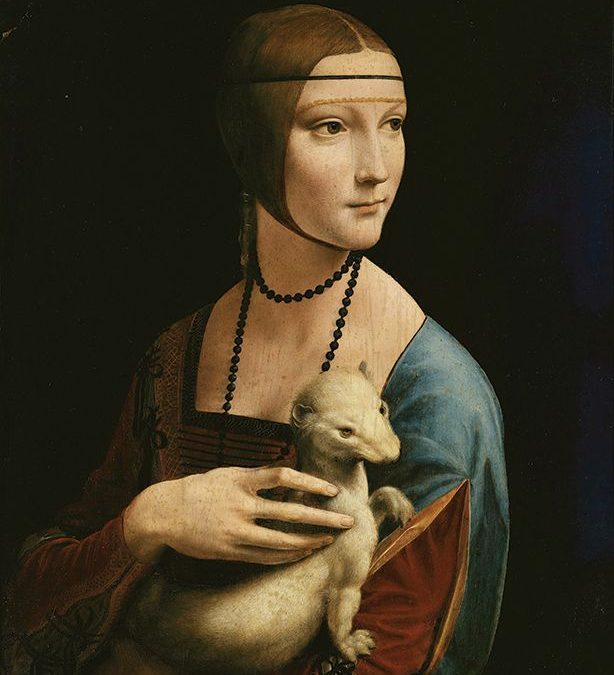 Leonardo da Vinci’s portrait of Cecilia Gallerani—at one time a sort of maîtresse en titre to Ludovico Sforza of Milan—is not well documented. Indeed, for more than two centuries its whereabouts were completely unknown. The “extraordinary journey” which Eden Collinsworth advertises in the long title of her new book is therefore, of necessity, only partially recounted. As for the “most mysterious” element, well, tell that to the Mona Lisa.

In fact, the Cecilia portrait, dated around 1489-91 and usually known as Lady with an Ermine, is one of Leonardo’s more prosaic works, though it is beautifully executed with an almost Netherlandish precision. The sitter gracefully wrangles a powerful little mustelid, variously interpreted as a reference to Cecilia’s family name—the Greek for ermine is (galē)—an allegory of moderation, a nod to a heraldic order to which Ludovico had recently been admitted and as a symbolic representation of his membrum virile (among other theories).

The picture seems to have stayed with its sitter for a while, but the details of its subsequent journey are obscure, though it may have been at Emperor Rudolf II’s court in Prague around the turn of the 17th century. Collinsworth does not trouble herself overmuch with this part of Cecilia’s story. Her focus is on the period after the painting resurfaces in 1798, when the Polish nobleman, Adam Jerzy Czatoryski, bought it for his mother against a turbulent geopolitical backdrop: the gobbling up of Poland by the European Great Powers in the second half of the 18th century, and the ensuing diaspora of Polish aristocrats to London, Paris and St Petersburg; the many crises and conflicts over the 19th century and into the next; and, ultimately, the cataclysm of the Second World War. Through all these tumultuous goings-on Cecilia, being small and precious, often finds herself packed in a suitcase or walled up in a cellar: a mute witness to momentous events, or hostage to outrageous fortune.

Collinsworth is a power player in US journalism who has previously written about sex and etiquette, among much else. In what appears to be her first venture into art history she declares, with a peculiar kind of pride, that she is a non-specialist. Unfortunately, the historical and art-historical elements of What the Ermine Saw are riddled with elisions, oversimplifications and outright howlers (“condottiero” instead of condottiere, for example). She is on surer ground when she gets to the newsier post-1939 part of the tale, as Cecilia, stolen by the Nazis, is rescued by the Office of Strategic Service’s specialist art repatriation team, the so-called Monuments Men (I prefer the GIs’ term “Venus Fixers”), with a little help from a courageous French curator, Rose Valland, only to become a political football in Cold War Poland. (Adam Jerzy’s last direct descendent, Adam Karol, finally sold it to the Polish government in 2016.)

The book, so far as one can tell from the publicity, is aimed at a generalist, Hare-With-Amber-Eyes-reading audience and fans of Donna Tartt’s novel The Goldfinch. At any rate, it reads decidedly oddly, as if it had been run through some piece of AI software designed to turn standard English into popular historical narrative non-fiction: from the rom-com-ready Leonardo (“He had a perfectly straight Grecian nose and deep-set soulful eyes”) to a cavalcade of “exceptional” women, which in stories like this mostly means exceptionally rich or posh women, to needlessly tortured syntax (“Leonardo’s illegitimate birth would not have involved any injury to his future”; “the garlic-seasoned feasts placed in front of Isabella became secondary to the sharp craving she had for the man seated at the head of the table”) on just about every page.

It is an approach that may well find admirers, though it might have been better suited to a 16th-century mannerist, a Parmigianino or a Beccafumi, than poor Leonardo, with his luminous mind and his clear eye.